BLOG: No armies of one 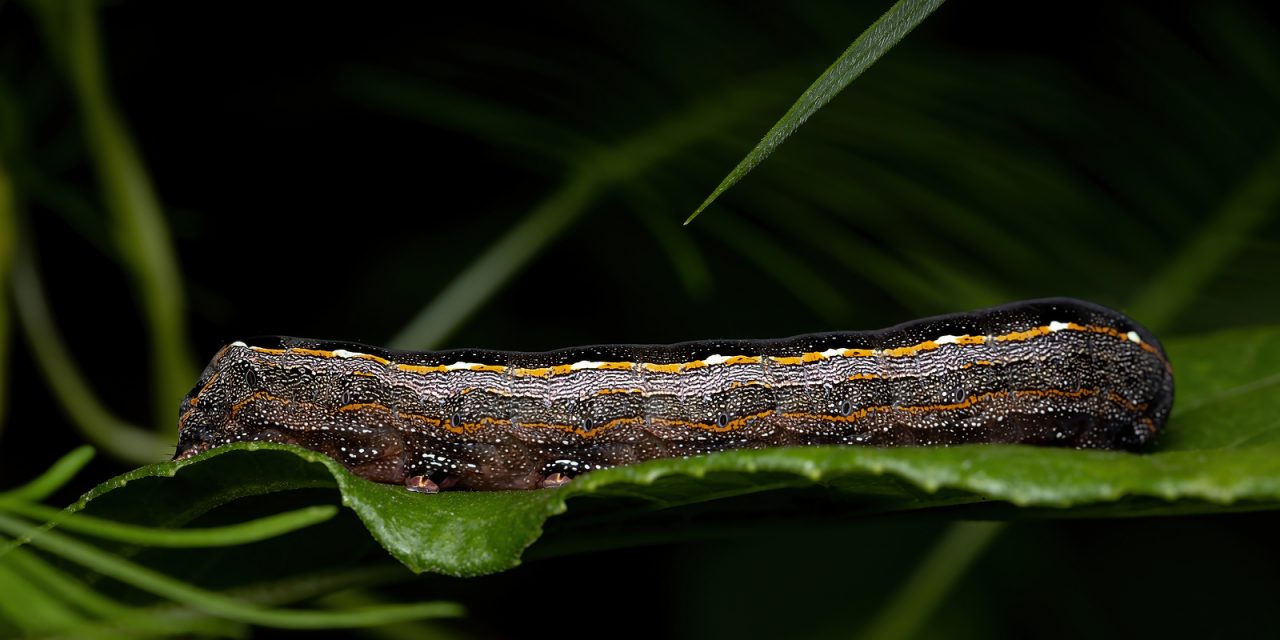 People rarely notice one armyworm (Spodoptera frugiperda). As a matter of fact, the presence of two or three will most likely go unnoticed as well. But when hundreds or even thousands are working together in unity to devour your lawn, you will most certainly realize their impact.

This is the situation that many Oklahomans have recently found themselves. According to Eric Rebek, a professor of entomology at Oklahoma State University, “The fall armyworm hasn’t been this bad in Oklahoma in almost 20 years.”

It’s an invasion. The presence of fall armyworm has been so great this year that local pest companies are completely overwhelmed and are struggling to keep up with the calls and demands for help.

Fall armyworm doesn’t overwinter in Oklahoma because it cannot tolerate our cold winter temperatures. However, each year fall armyworm moths are carried by air currents northward from the Gulf Coast, Texas and Mexico. The females lay their eggs in masses, and by early July larvae are present. When armyworms are in their larval stage they manifest as caterpillars. It is during this stage of their lifecycle that they are so destructive.

According to the Alabama A&M/Auburn University Extension, “There are two strains of the fall armyworm, the rice strain and the corn strain. The rice strain caterpillars feed on a variety of forage crops, but seem to prefer lush, green, well-fertilized Bermuda grass. Other forage grasses that are hosts for fall armyworm are bahia grass, pearl millet, sorghum-sudan hybrids, tall fescue and various winter annuals including ryegrass, rye, wheat and oats.”

If your turf happens to be a warm season grass such as Bermuda or Zoysia, you’re fortunate because with sufficient watering, those grasses have a better chance of coming back after suffering armyworm damage. After voraciously feeding for two to three weeks, the larvae (caterpillar) then digs into the soil to pupate. In 10-14 days a new generation of moths emerge. Each fall, two to three generations of moths are populated.

In a way, armyworms remind me of the Christian army. People rarely notice one Christian. As a matter of fact, the presence of two or three will most likely go unnoticed as well. But when hundreds or even thousands are working together in unity to advance the Gospel, you will most certainly realize their impact.

In Rom. 12:4-5 we learn of an important concept, “For just as we have many members in one body and all the members do not have the same function, so we, who are many, are one body in Christ and individually members’ one of another.” Later, Paul tells us in I Cor. 1:10, “Now I urge you, brothers and sisters, by the name of our Lord Jesus Christ, that you all agree and that there be no divisions among you, but that you be made complete in the same mind and in the same judgment.”

It was never God’s plan for us to follow Him as a ‘Lone Ranger’ Christian—a single armyworm in the middle of a big lawn. His plan was then, and is still today, for us to be part of the larger Body of Christ, to work together in unity with no division and being of the same mind and judgement for His glory. God, in His infinite wisdom, knew that in order for His will to be accomplished, His followers would need the support, encouragement and accountability of others who had also committed to follow Him.

All who are alive today can testify that we are experiencing troublesome times. The world is groaning, and we as the Body of Christ are called to invade our culture and make a noticeable impact. Now is not the time to seclude and hide and go underground to soothe our frazzled souls but rather to boldly be the salt and light that we were called to be.

Brothers and sisters in Christ, let me encourage you with the words of Josh.1:9, “Have I not commanded you? Be strong and courageous! Do not be terrified nor dismayed, for the Lord your God is with you wherever you go.”

Find your role in the Body of Christ and be part of the Gospel invasion.