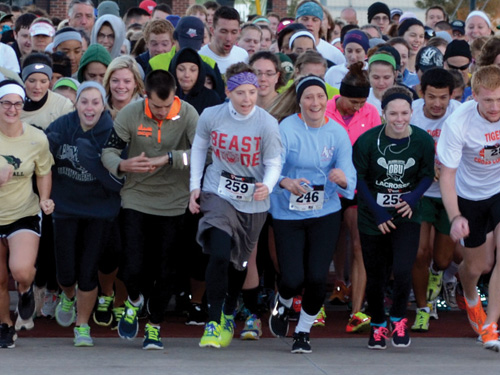 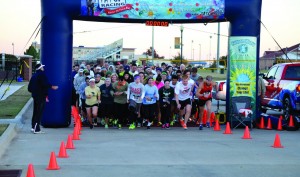 The “Stampede” begins, as more than 250 runners are off to start the Second-Annual Bison Stampede!

SHAWNEE—A new tradition has begun on Bison Hill. It involves runners “stampeding” around the Oklahoma Baptist University (OBU) campus, and all for a good cause.

The second-annual Bison Stampede 5K and 10K races hosted more than 250 participants, on Sat., Nov. 9. The early morning start and chilly conditions did not prevent runners taking part in the event that occurred during OBU’s Homecoming Weekend. 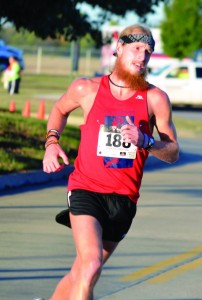 Proceeds from the race benefit Oklahoma Baptist Disaster Relief (OBDR). Shawnee was an affected area when the tornadoes struck in late May. Amy Riggins, director of OBU’s Recreation and Wellness Center, served as the event’s coordinator and said they wanted to support OBDR for helping families in the Shawnee community during the storms’ aftermath.

“OBU was a big help to us when we were involved in the clean-up in May,” said Sam Porter, OBDR director. “They opened their dormitories for temporary lodging for our volunteers and for affected families. We appreciate our ‘partnership’ we have with OBU.”

Cale Eidson from Calera finished first in the Bison Stampede 10K with a time of 32:32. He was followed by Tyler Baxter of Yukon, who finished the 10K in 35:50. 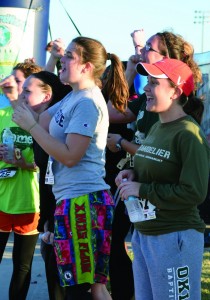 A cheering squad endured the chilly temperatures to support the runners.

McKenzie Jones of Midwest City placed third overall, but was the women’s 10K leader at a time of 36:42. Angela Widener of Pocasset finished second among the women 10K runners with a time of 41:04.

Caleb Biles of Ada won the Bison Stampede 5K, finishing the race in 18:41. He was followed by Mark Pontier of Shawnee, who finished in 21:49.

Paige Morrison from Plano, Texas led all women participants in the 5K, recording a time of 25:02. Hannah Dowell of Edmond was second among the women 5K runners, clocking a run time of 25:27.