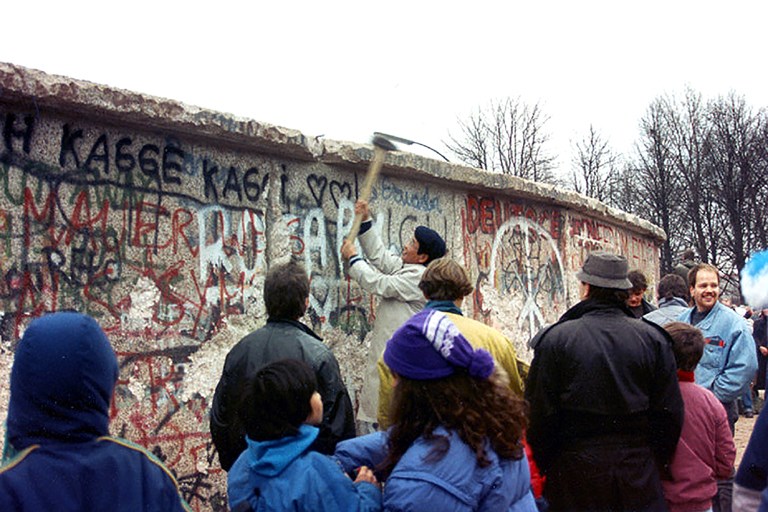 Bit by bit, men and women, children and youth, proletarian and elite, joined the protesters to literally pick the wall apart piece by piece with chisels and axes and bloodied fingers. Nov. 9, 1989, harkened a new era of democracy and freedom from communist repression — and hope for a more peaceful and democratic world.

For Christians, however, this day meant so much more than political change. The crumbling wall represented a spiritual victory and an opportunity to take the light of Christ into the darkness that had been cloaking Eastern Europe for decades. For the first time, an entire generation of Eastern Europeans was able to hear the Gospel and respond without fear of persecution.

Mark Edworthy, International Mission Board affinity strategy leader for Europe, stood at the remains of the wall a few months later with a hammer and chisel, eager to do his part in dismantling the barrier.

“The wall was an outward symbol of an inward reality. Communism had erected a spiritual barrier with its incessant denial of God’s existence and its cycle of cruelty. Spiritually, we eagerly took up a hammer and chisel to work against that greater barrier,” Edworthy said.

Katie and Shannon Ford, IMB missionaries serving in Ukraine, are former U.S. military personnel who were stationed in Germany when the wall fell.

“It was a tense time for military personnel, not knowing if there would be an attempt to regain control — much like what happened in Ukraine when the government collapsed earlier this year,” Shannon said. “What captured our hearts to come to this part of the world to serve was the flood of people from the East seeking a new life.”

Seeking a new life in the early days of freedom resulted in a spiritual revival. Those denied access to Christian witness for so long responded to the Gospel with gratitude and joy. Church doors were reopened, hidden faith was expressed and new faith was born.

But the crumbling wall also allowed the secular world access to people’s hearts.

As new products appeared in the store windows, consumers lacked resources to partake. Their empty pocketbooks led to greed and bitterness. Corruption in society flourished, as the heavy hand of communism wasn’t there to repress it.

Mafia power rings popped up in many countries, and repression moved from the government suites to the streets. For many, hopelessness replaced fear, and suicide rates increased.

Churches struggled to evangelize the communities around them. After years of knowing “big brother” was watching, it was difficult for the church to open its doors and welcome lost neighbors — hard to live their faith openly without fear of repression.

Missionaries flooded former communist countries and took on the role of teaching the church to be the church again. Church planters, human needs workers, evangelists and teachers all rushed in to lend a hand and train the next generation. Droves of nurses, doctors and childcare specialists came to minister to orphans, the elderly and villagers while sharing with them the hope of Christ.

Today the church has grown numerically and spiritually.

“Two things have greatly changed since the early 1990s. First, we have a generation who never lived under communism, and the influx of capitalism and freedoms have brought swift change inside and outside the church. Second, Baptists and other denominations have developed their infrastructure for Christian education and missions,” Ford said.

Camps, seminaries, colleges, new church buildings, publishing houses and Christian bookstores are not uncommon now. Discipleship, evangelism and a missionary mindset are the result of this new Christian influence.

Mick Stockwell, IMB strategy training associate for Europe, has witnessed the changes over the last 25 years and is heartened by what God is doing.

“Even though political and economic struggles remain, the Gospel is breaking free from the chains of former communism to new frontiers,” Stockwell said. “Churches in Eastern Europe are engaging in cross-cultural missions by sending short-term mission teams and developing strategies for sending long-term missionaries.”

Today, evangelical leaders from Romania, Ukraine, Moldova, Belarus, Albania and Russia not only have planted multiple churches in their own countries but are actively pursuing efforts to win the world for Christ.

“Nearly 25 years later, we can see greater trophies than stone and mortar as the Lord has continued to build His church throughout the former Soviet sphere,” Edworthy said, adding, “Our constant prayer is that the Lord of the harvest will send more workers.”

There is a sense of urgency and purpose in the work, especially in Eastern Europe, because no one knows how long the door to some of these countries will remain open. The ongoing war in Ukraine highlights the fact that, although the Cold War is over, communism and other secular philosophies are still at work. Christians who are now in positions of leadership in society have a mandate to use their influence to continue cultivating change.

“We are seeing young Christian men becoming leaders in business and other professional fields,” Ford said. “This opens up new areas of influence for the Gospel, so the church has to be ready to equip this generation to be salt and light in the workplace while making use of freedoms to pursue education and opportunities that their parents and grandparents were rarely afforded.”

Key prayer requests from the region:

— Pray for these emerging national partners who want to seize opportunities to spread the Gospel where they have unique opportunities.

— Pray for theological and missional leaders as they train this next generation of missionaries.

— Pray for God’s Word to flourish while there is time.

Nicole Lee is a writer for IMB based in Europe.

View all posts by Nicole Lee