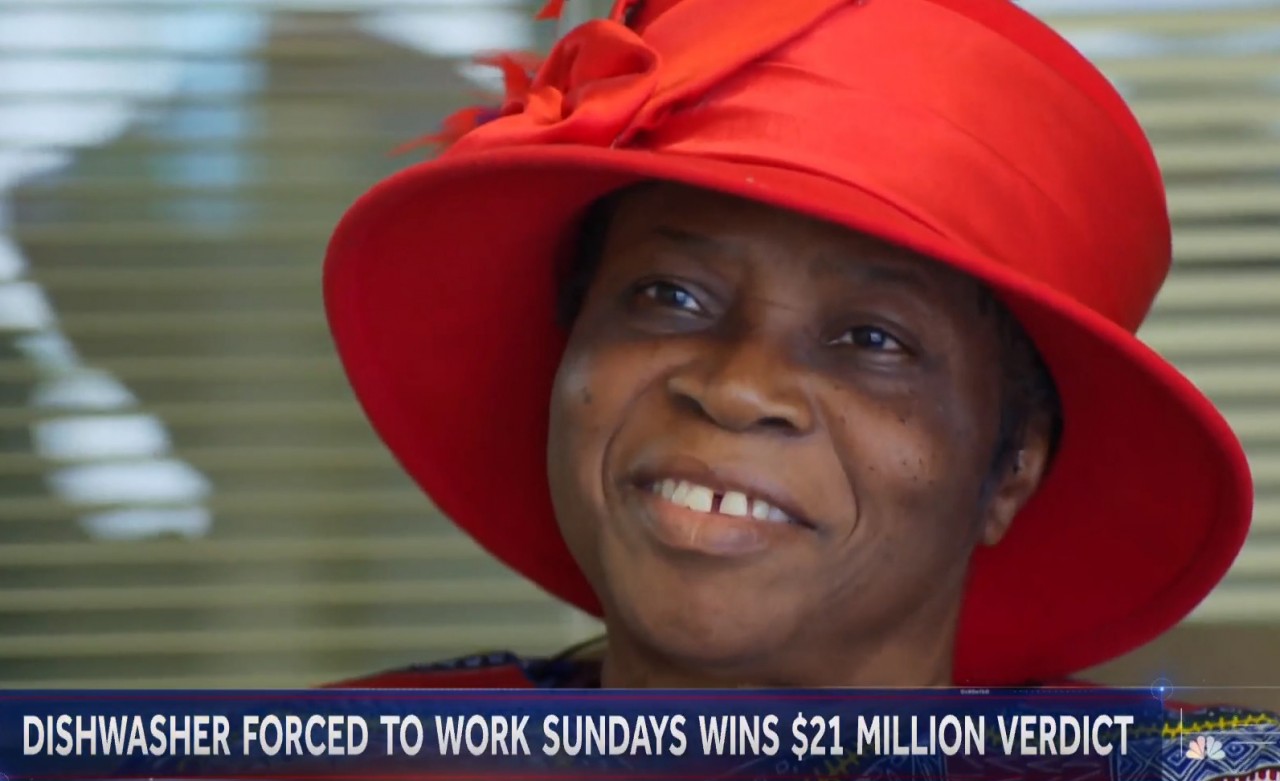 Marie Jean-Pierre, a hotel dishwasher awarded $21.5 million in her court battle to honor the Sabbath, is a faithful member of Bethel Evangelical Baptist Church in Miami. Screen capture from NBC

Marie Jean-Pierre, fired from the Conrad Hotel in 2016 after she refused to work on Sundays, has attended the Haitian church nearly 20 years, Felix said. Various news reports have erroneously identified Jean-Pierre, 60, as Catholic.

The Southern Baptist pastor describes Jean-Pierre as a “devout believer” who “embraces her faith in all aspects of her daily life.”

“What’s encouraging in this is a woman who showed a lot of courage to make that choice” to stand firm in her right to attend church on Sundays, Felix said. “It kind of reminds me of Daniel, in Daniel 6, where Daniel is such a diligent worker that he is chosen to be one of the three overseers in the country…. And of course, &#91;his enemies&#93; couldn’t find anything against him, so they tried to get him on his religious beliefs.”

The jury ruled that the Conrad Hotel managed by Park Hotels and Resorts Inc. of Tysons, Va., formerly known as Hilton Worldwide, violated the Civil Rights Act of 1964 when it failed to accommodate Jean-Pierre’s Sunday worship, The Washington Post reported. The hotel fired Jean-Pierre in March 2016 and plans to appeal the verdict.

“Here you have a person who truly felt convicted to do their best at work and respond to all the needs that the employer was asking them to respond to,” Felix said, “except that they were asking for the employer to make accommodations for them to participate in worship, particularly on Sundays.

“The nature of the case was that for many years the hotel chain had done so, but then when they experienced a change in management,” Felix said, “a different approach was taken.”

The jury awarded Jean-Pierre $36,000 in back wages, $500,000 for emotional pain and mental anguish, and $21 million in punitive damages. But any amount she receives will be substantially less, as federal law limits punitive damage awards to $300,000.

“It’s just a great day for religious freedoms and protection of workers,” the newspaper quoted Brumer as saying. “For them, it wasn’t really money. It was trying to right the wrong.”

“Ms. Jean-Pierre is a beloved and well-respected member of Bethel Evangelical Baptist Church,” Felix told the court. “She is a devout Christian engaged in the ministry of the church.”

Jean-Pierre regularly attends Sunday worship, is active in Sunday School, the choir, the women’s ministry, the prayer/intercessory ministry, mission outreach to Haiti and other activities. Whatever amount she receives from the court, Jean-Pierre has said, she will use to help orphans in Haiti.

“Particularly Haiti is strong on her heart,” Felix said of Jean-Pierre, a Haitian native.

“Being part of a church body, living out your faith, should make you a better worker, a more pleasant worker, on-task worker and more loving worker. And in her case, that’s what she displayed at work,” Felix said. “She faithfully completed her duties, from my understanding, but when it came to requesting time to actually engage in the life of the church, particularly being able to worship on Sundays, this is where the hotel failed to make appropriate accommodations.”

Bethel Evangelical Baptist Church is among 100 majority Haitian congregations of the Miami Baptist Association and part of the Florida Baptist Convention.