Baptism still the focus to adding to the Kingdom 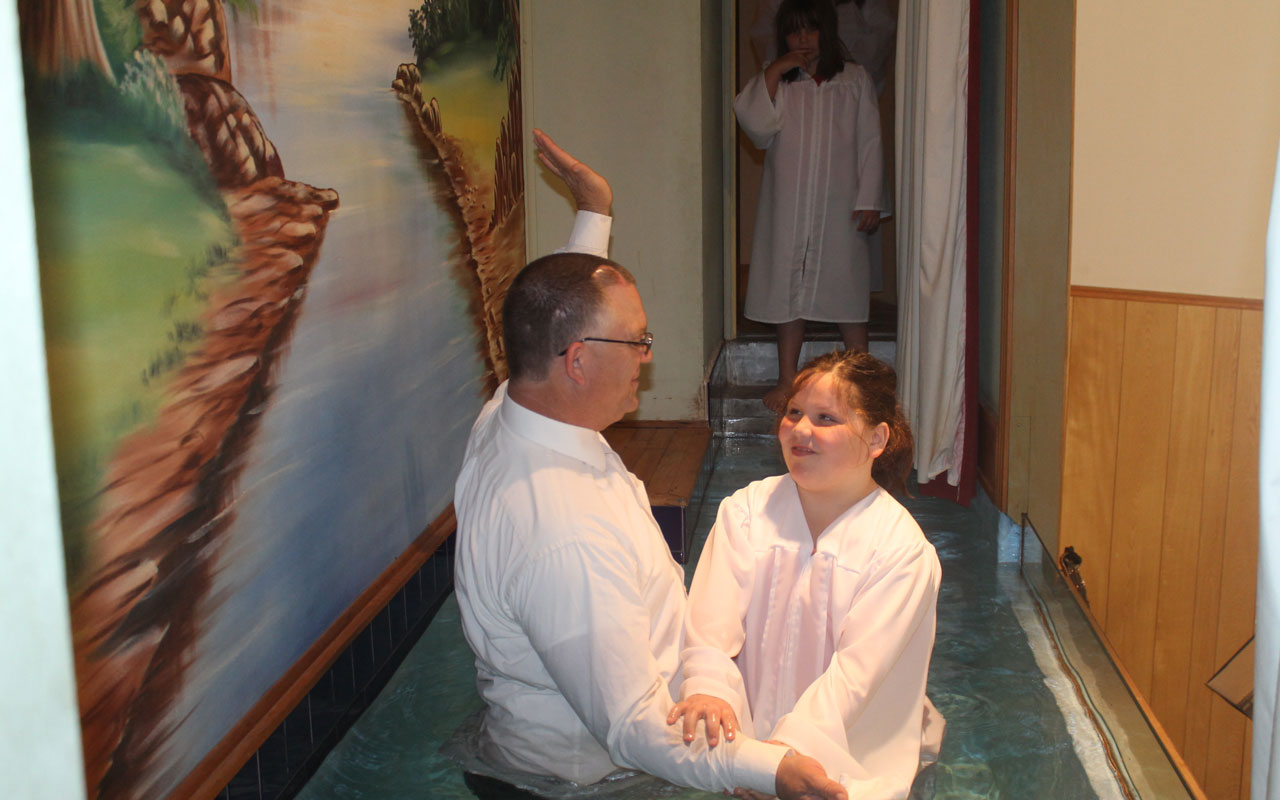 RUSH SPRINGS—Six times on Easter Sunday, those words were repeated at Rush Springs church (RSBC), “I baptize you my brother/sister in the name of the Father, the Son, and the Holy Spirit.”

Rush Springs, located between Chickasha and Marlow, is known for its world famous watermelons; yet, these days, at RSBC, they have something else to be excited about. It is the growing number of people coming to Jesus and following in baptism.

For the past several years RSBC has been recognized as a leader in baptisms by the Baptist General Convention of Oklahoma (BGCO). In 2013, it was fifth in the state for baptisms, and this past year, it was third in the state. So how does a church continue to lead in baptisms today even in the midst of people moving away from the small towns to the larger cities? Pastor Richard McCormack calls it “The Andrew Method.”

“Today, we have a problem in the Southern Baptist Convention,” McCormack said. “Even with the addition of more churches and more church plants, we still fail to do the Great Commission. We have the ‘Go’ part down, but making disciples and baptizing is where we are failing.”

McCormack went on to explain how the Andrew Method works.

• He said most pastors are disassociated from the lost mainly due to running a church. This is not to say pastors don’t want to lead people to Jesus, it is they just do not know any lost people.

• This then leads us to the people who are around lost people everyday—the church members. However, most members will not share the gospel of salvation with a friend or family member because they are afraid of messing up or not saying the right words.

“And therein lies the problem,” McCormack stressed. “Staff members who do not know the lost, and members who will not share the Gospel with the lost. Thereby, the easiest way to increase the baptism numbers of any church is to marry the two together—or what I call using the Andrew Method.”

The Andrew Method is simply twofold, the pastor said.

“First, your members bring a child, a teen, or an adult who is showing interest in becoming a Christian to the pastor or a staff member,” he said.

Finally, after the person receives Jesus, the pastor then follows up with baptism.

“No, we do not believe baptism can save.” McCormack said, “But, we are Baptist and we need to emphasize the need for baptism. However, we do believe a person cannot grow in Jesus if he has not been baptized.”

McCormack is also an advocate for baptizing children as young as six.

“Does that mean I will unconditionally baptize a child if they are six years old? Not at all. However, I do believe that a child, at that age, can understand faith simpler than an adult,” he said.

McCormack makes notice of how almost all great leaders in the faith came to Jesus as a child or young teen. From Charles H. Spurgeon to Billy Graham. Kenneth Hemphill to W.A. Criswell. All became followers of Jesus while they were 13 or younger, according to McCormack.

“When I heard that story,” McCormack said, “it sealed the debate in my heart.”