Bacone College football player encourages others to find the Lord

MUSKOGEE—How does a young man from Reidsville, N.C. end up at Bacone College in Muskogee? John Jackson had never heard of Bacone when he talked to a coach who was on the East Coast recruiting.

“I was working at the time,” Jackson recalled. “I’ve always wanted to play football and go to school at the same time. I was living in my friend’s basement at the time, and a coach called trying to 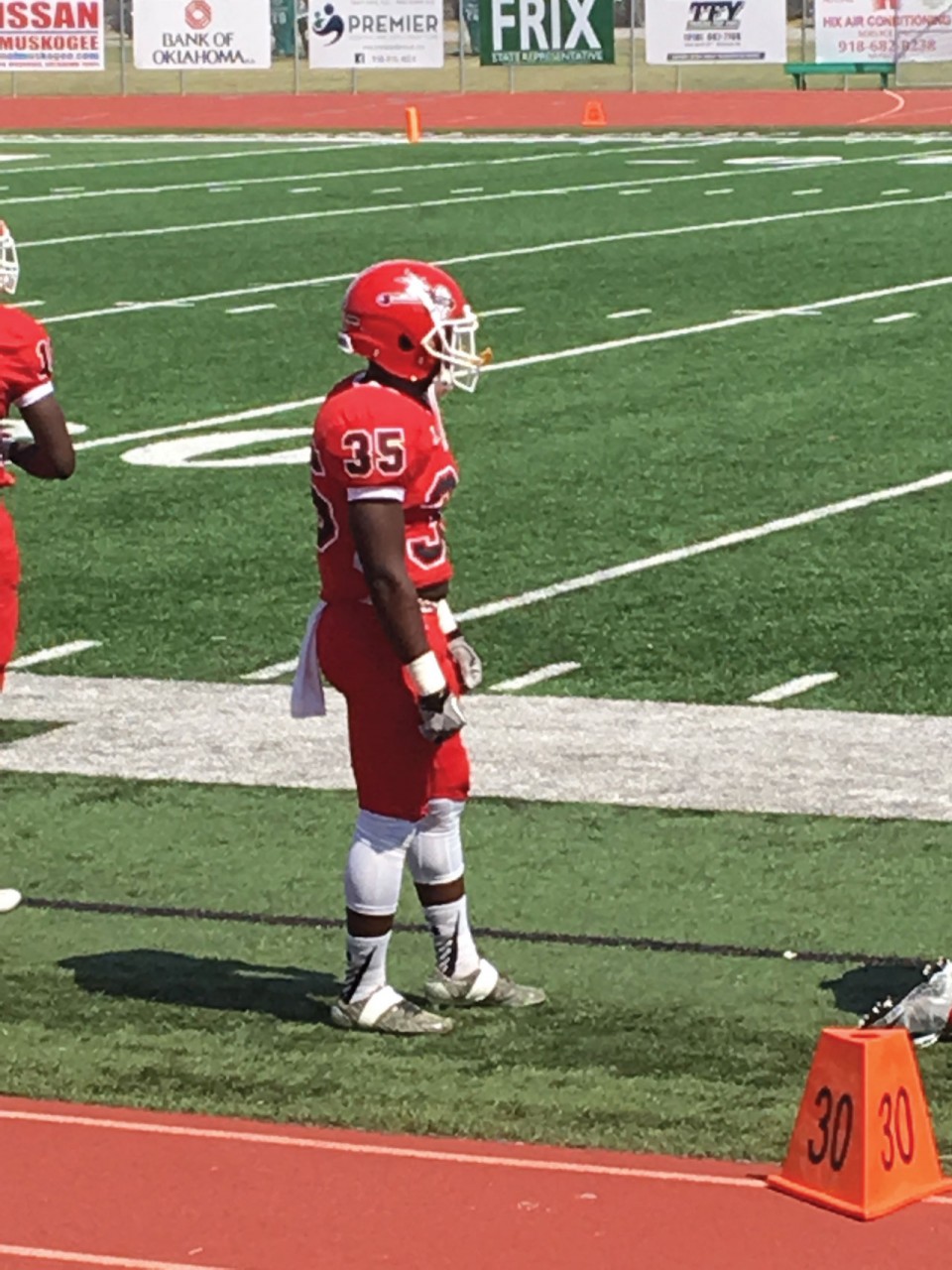 recruit him, so I asked the coach if he was looking for players like myself. The coach said yes. He gave me an offer, and the Lord opened that door for me to play football.”

The Lord opened other doors for Jackson, including one that led to serving as president of Bacone’s Baptist Collegiate Ministries (BCM). He is currently in his second term as BCM president, as he was voted unanimously in his re-election.

“When I first met John, he didn’t know what BCM was,” L.C. Brown, Bacone BCM associate director, said. “He had a desire to know more about God’s Word.”

Brown is familiar with the path Jackson took to come to Bacone. The Chicago, Ill. native graduated from Bacone after playing on the football team. It was because of Steve and Sharon Dixon from Fort Gibson, First offering Brown some food they had left over from a church cookout that led to Brown attending church, making a profession of faith and now being in his current role at Bacone’s BCM that allows Brown to have a similar impact on other college students, including Jackson.

“A lot of times I’ve spent with him, we would go through Scriptures, recommending Scriptures to him to read in his quiet times, encouraging him to pray and letting him know it’s okay to be different on campus,” Brown said about discipling Jackson.

Jackson said his football coach encouraged him to go to a BCM Bible study during Jackson’s first semester. He heard Brown lead the Bible study that night, and Jackson has been involved ever since.

“We usually draw 10-15 students every week,” Jackson said about the weekly BCM meetings. “We are trying to grow. We got new students to come this semester and encourage them to invite their friends to join us.”

Jackson hopes more students will find the benefit of being a part of BCM, just like he discovered, especially with the encouragement and support he receives from leaders like Brown.

“L.C. provides real application of college and what is going on today to how to be a Christian in today’s world,” Jackson said. “There’s always something (at the BCM meetings) that you can take away about what’s going on in your daily life. L.C. went to Bacone. He has a feel for what’s going on here. He makes it relevant, helps make the Word relevant.”

Not only is Jackson being discipled, but he is in turn discipling other students. 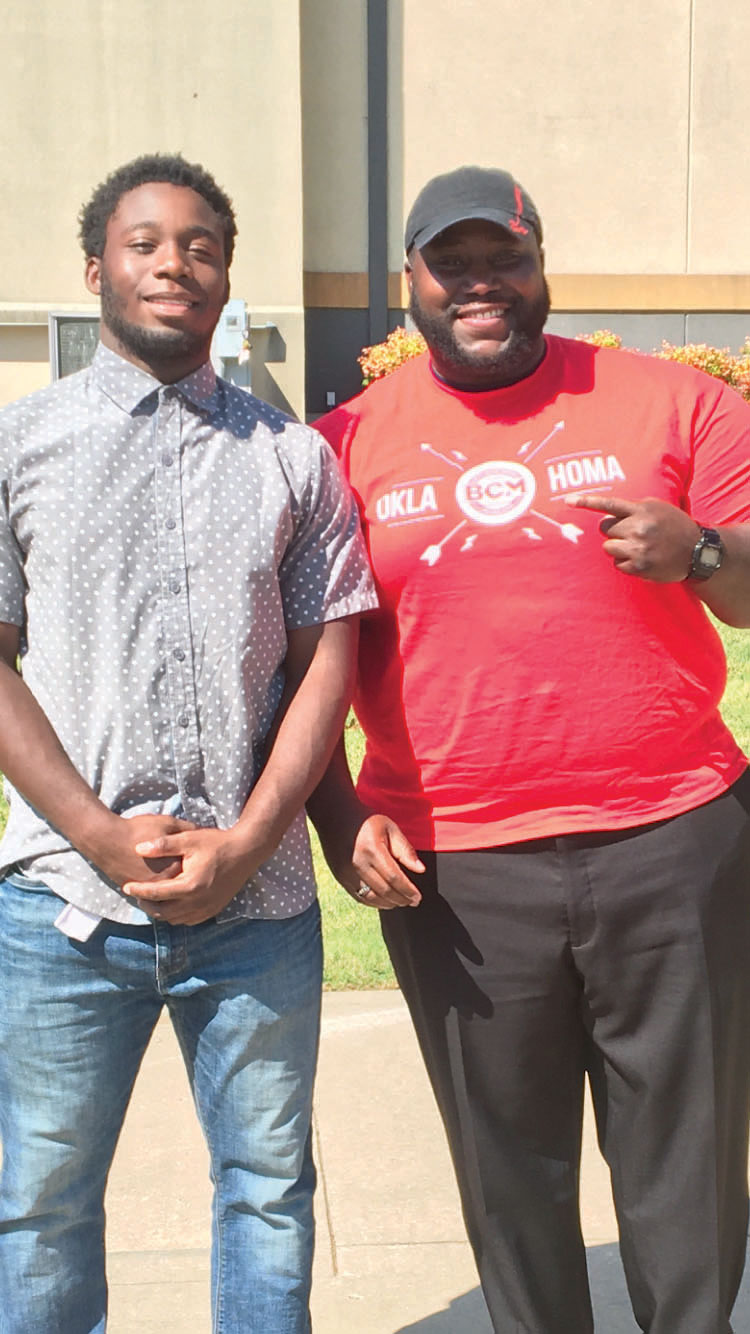 “I have seen more people come back (to BCM),” he said. “They become more interactive. I’ve seen spiritual growth in people. They are curious and want to know more.”

Brown said everyone on campus knows Jackson is a Christian who has been a great encouragement to others.

“One of the biggest opportunities for him (to share Christ) is with his very own roommate who is Muslim,” Brown said. “John always encourages (his roommate) to study things, to learn for himself. He’s been attending church, asking questions and attending BCM events because of John’s influence.”

Jackson said he has had many conversations about Christ with students. “Religion seems to come up a lot,” he said about talking with fellow students, “and that opens the door to talk about my faith. Everybody knows I’m a believer. I will talk about God with people. I may not always get a chance to share, but I do my best to live the Christian faith.”

He also encourages his teammates. Bacone has not started the season well, as the team lost its first four games, but Jackson doesn’t let the losses discourage him or keep him from setting a Christian example.

“I’m the good guy on the team. One time, I got upset in practice because we weren’t executing like we were supposed to, and they called me ‘Angry Jack’ for the rest of the day,” he said with a laugh. “Normally, I don’t get upset, but just in that one particular moment I did get upset. They know how I am about things. They know I want to win, and that’s what we are trying to do as a team, practice good habits so we can get better. For the most part, they look at me as always being positive. They come to me for advice. As far as character, I feel like when people are around me, I want to encourage them to do better.”

With his experience with the BCM, Jackson also had the opportunity last Spring Break to go with other BCM students from other colleges to Denver, Colo., to help with the Karen people, refugees from Burma who are trying to find a new life in the states. Jackson and other students helped the Karen people, who did not speak English, fill out paperwork in order to find work and be able to remain in the U.S.

“I’ve always loved helping people,” Jackson said. “The (BCM mission trip) helped me put things into perspective. These people are trying to get registered, but no one could speak their language. They were very gracious and appreciative of us just trying to help them fill out paperwork.”

So how does a young man from Reidsville, N.C. end up at Bacone College? It’s through the Lord’s leading, making the paths straight for John Jackson as he helps others find the Lord’s direction as well.