Back to school bash 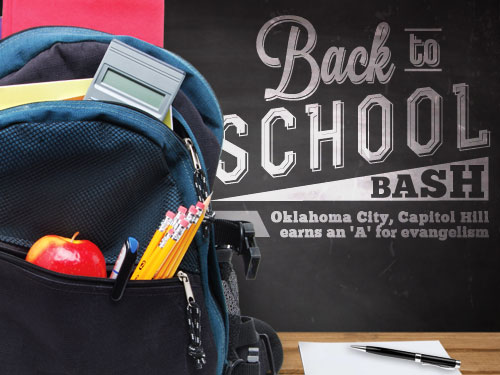 With an “all hands on deck” effort, members of Oklahoma City, Capitol Hill welcomed approximately 4,000 people to their campus Aug. 4 to the church’s Seventh Annual Back to School Bash.

The church likely earned an “A” in evangelism on its report card one day before classes officially began for the Oklahoma City Public Schools after at least 25 of the visitors accepted Christ as Savior during the two-hour event.

Coordinator Travis French said the turnout was greater than expected.

“The problem is matching different teachers’ supply lists,” French confessed. “We tried to find something that is on every teacher’s supply list.

“Wal-Mart was instrumental in supplying the items at a lower cost for us because we bought such huge quantities. As a result, we saved money, and we could shop at one place and didn’t have to go all over town.”

Putting the backpacks together was another example of cooperation.

“The two previous Wednesday nights, we held bag-stuffing parties in the gym,” French said. “We lined everyone up and did it in assembly line fashion. That was another opportunity for our members to get together and serve together.”

The church filled 1,250 such backpacks, but those were quickly gone.

“So, we gave out 750 rainchecks, if you will, to children who didn’t get one and invited them to come back to the church the following Saturday (Aug. 10) to get a backpack,” said French, a layman who works as a firefighter with the Oklahoma City Fire Department, and has organized the event the past three years.

“In past years, we’ve only had a few decisions for Christ, but we had 25 decisions Sunday,” he said, “including two people in the registration line who accepted Christ after visiting with our members who shared the Gospel with them.”

Most of the church’s members were involved in the “Bash,” as they call it.

Capitol Hill runs about 350-400 in attendance each week.

“We had 350 volunteers this year of all ages. Our church runs just about that many on Sunday, so it was an all hands on deck thing,” French said. “It’s a huge event. We put it up one day, and take it down the next. It’s really great to see our church body out serving like that.”

“The percentage of people  it takes is huge. It is astounding,” said Mark DeMoss, who has been pastor since 2006 and helped begin the event a year later.

So, what’s the secret of getting a large number of members to pitch in?

“They also realize that this is bigger than we are. I mean,  we don’t consider ourselves a big church. We had 350 in church that morning and we knew that we might be taking care of 3,500 people that afternoon. I think just the astounding realization of that was, ‘Whew, I better help.’”

Highly organized, thanks to French’s experience and the church body’s coordinated effort, visitors filled out registration cards—which were available in both English and Spanish. Then, they were issued an armband in one of  two colors, one for school-age children, who were to receive a backpack, and one for adults and non-school-age children.

“They came through and got a color-coded Gospel tract, because we only wanted  300-400 in the sanctuary at one time,” French said. “That was how we counted them. Then they heard a short Gospel presentation, received instructions on what activities were out on the property and were dismissed to go out and have fun.”

Outdoor activities included a rock climbing wall, a dunk tank and eight or nine inflatables. Educational displays and vehicles from the Oklahoma City Police and Fire departments and other agencies also were on hand.

Church members operated four tents in which the Gospel was presented, and simple games were offered under other tents. More than 200 door prizes, including a grand prize of an iPad Mini were given away.

Food and drinks were provided by Little Caesar’s Pizza and Chicken Express, which provided 140 gallons of sweet and unsweet tea. Popcorn and sno cones rounded out the menu.

“The beauty of the Bash was it was all for the Lord. I pray that God gets the glory for it all,” French concluded.

The Bash came on the heels of Capitol Hill’s response to the May tornadoes.

“We were super involved in that response, too,” French said. “We ran a shelter, so it’s been one of those years when we have had a great opportunity to show the love of God to our community.”

Capitol Hill didn’t forget teachers after the tornadoes, either. The church hosted a “Shower of Blessings” on July 19, when Moore School District teachers were treated to “Cakes” of supplies to help them prepare for the new school year.

DeMoss added, “I tell our members we do this for two reasons, and it has nothing to do with school supplies or the economy. One, it is a unifier for our church. When you consider that 85-plus percent of our congregation is going to serve at the same event at the same time for the same reason, that’s unifying. So that’s just a great thing for us to do for unity.

“The second reason is most Southern Baptists never share their faith, and we’re creating an opportunity where almost everyone on campus, if they’ll take the opportunity, can share the Gospel with someone.

“So, the opportunity to train people and put them in an environment where it’s going to be easy to talk to someone about Christ is a healthy thing for our church to do.

“Also, it does help the community and forward the Kingdom work as we partner with other churches.”