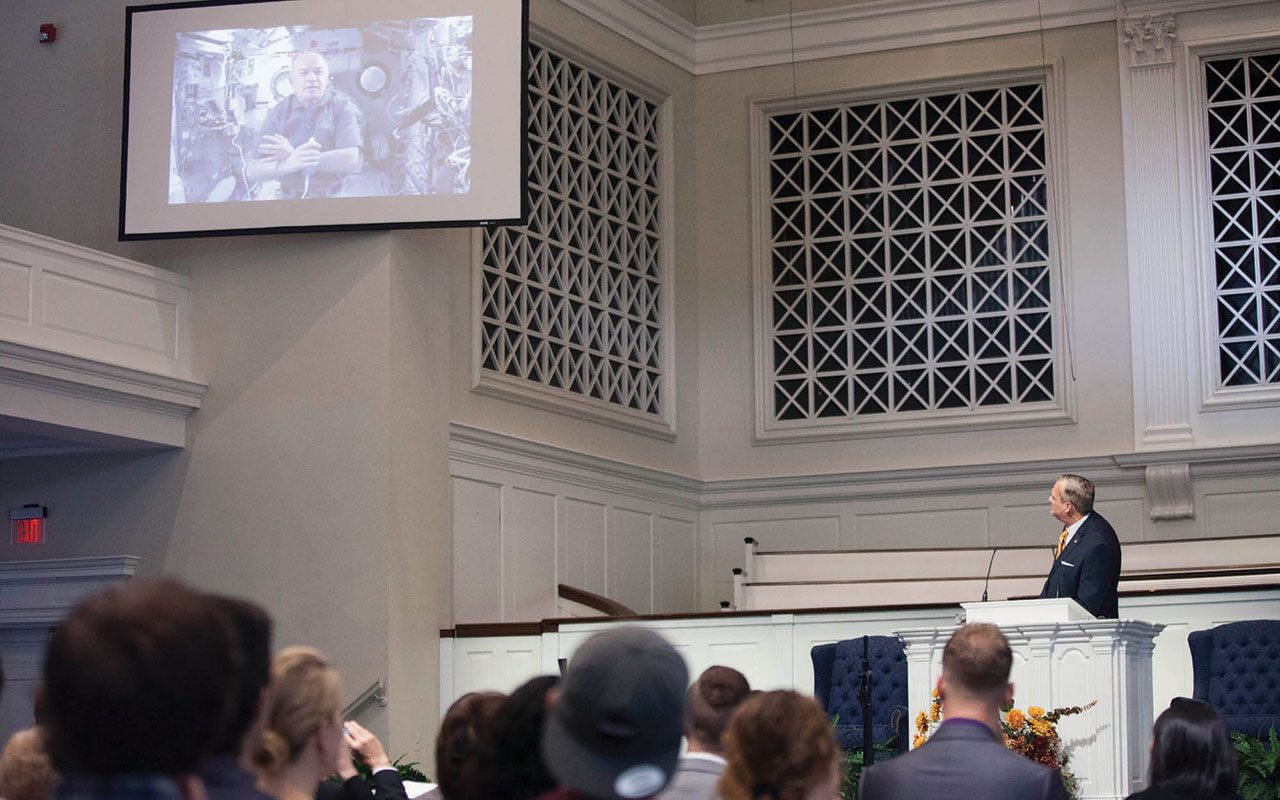 Williams, interviewed by SBTS President R. Albert Mohler Jr., is commander for Expedition 48 of the International Space Station. The astronaut has spoken at the Louisville, Ky., campus previously and regularly listens to Mohler’s podcast “The Briefing” in orbit.

Williams set the record for the most time spent in space by an American on Aug. 24, passing the 520-day mark set by Scott Kelly. When he returns from orbit after his 172-day mission on Sept. 6, he will set a new standard for an American in space at 534 days, according to NASA’s website.

During the interview, Williams held a microphone and displayed the station’s handheld camera with an 800mm lens, one of the cameras he uses to take his popular high-resolution photos of Earth. The view is one that only deepens his Christian faith.

“When I look out the window and I see this—all of the elements are what you would imagine you would see with a creative work by an infinite God,” Williams said. “You see the design, you see the beauty, you see the purpose, you see all of those elements, you see order in all the details.”

Williams spoke with Mohler for 15 minutes at the beginning of the chapel hour from 250 miles above Earth just after the International Space Station had passed North America before trekking over the north Atlantic. The space station orbits the earth every 90 minutes, Williams said. Selected for the NASA astronaut class in 1996, the West Point graduate and retired U.S. Army colonel has taken four spaceflights and has extensive spacewalk experience.

“It’s one thing to be inside here, look out the window, and view the elements of God’s creation in deep space as well as the planet,” Williams said of spacewalking. “It’s quite another thing to go outside, and now you have set yourself inside this suit that is sustaining your life and you can see through that full-faced visor not only the vastness and the majesty of the globe itself but deep out into space. It just deepens a comprehension, the observation of what we know through Scripture about the amazing creative work of God. It’s an incredibly humbling experience.”

When Mohler asked what he missed most about Earth, Williams spoke of relationships, specifically his wife Anna-Marie, saying she has handled well his 534 cumulative days in space. Williams also has four grandchildren, the youngest of whom was born just before launch, and he has yet to meet.

“Family is what I miss the most,” he said. “That’s centered around relationships, our closest relationships, and as believers we understand how central relationship is to the human experience.”

At the conclusion of the interview, Williams performed a zero-gravity backflip and waved to the chapel audience. Mohler called the astronaut a “dear brother in Christ” and a “friend of the seminary.”

Mohler also thanked NASA, which went beyond normal protocol, he said, in order to arrange the interview during chapel. Southern Seminary will feature a recorded message from Williams during its fall festival, an annual event for the SBTS community, with the 2016 event featuring a space theme, “The Heavens Declare.”

Audio and video of the chapel will soon be available at sbts.edu/resources.