And two became one 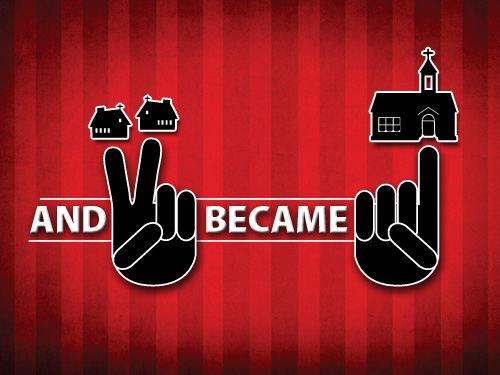 While a strong biblical concept in a marriage ceremony, the phrase, “And the two became one,” has taken on a different spin as two church starts have now become one.

In October, Radiant Life and Journey Fellowship Churches, both located in the Yukon area, began a merger, which will result in a “bigger, better” church with a launch due in January.

“So many churches today are closing their doors or splitting or having some type of division,” said Hank Hester, pastor of Radiant Life. “But we’re coming together to make one church, so we’ll have more resources and can do more for the community.”

Hester said both churches want to offer good children’s and youth ministries and have an impact on the community.

“It’s hard when you have limited resources and limited people, and especially in a time when people are so much into the big church,” explained Hester. “We were both struggling separately, and having trouble getting the churches kicked off. We saw a lot of growth, saw God work in big ways, but it seemed every time we’d reach a family, they would eventually leave and go somewhere else because there was a bigger, better church.”

Hester emphasized that their goal is not only to make a bigger, better church, but to be better able to disciple people effectively.

After only a few weeks together, Hester said they now have a full-blown functioning church.

“It’s like a church that’s been established 15-20 years,” he commented. “We have a full elder board, a youth pastor, ministry assistant, an apartment church planting ministry and two pastors.

And here’s where the two became one enters into play once more.

Two pastors—not co-pastors, but a set.

“We are both (Hester and Journey Fellowship pastor Ryan Abernathy) pastors,” Hester underscored. “We both preach, we both disciple. We both have a job description. We are sharing duties. We’re both pastoring a church. We take turns preaching. Each of us has different skills, different personalities. We complement each other, making for a strong pastoral team.”

For example, Hester explained, in December the pastors are preaching on the subject “The Same Jesus,” and planned the series together and divided up the sermons.

“Sometimes, we team preach; we both get up there and tag team,” revealed Hester. “One of us will talk about a point, and the other will come in and add some additional support.”

“It was neat because it broke things up and allowed for better attention because you weren’t focused on just one person for 45 minutes,” he noted. “It was back and forth.”

Radiant Life, which averaged 35-40 in attendance, was meeting in a shopping center, and Journey Fellowship, averaging 50-70, met at a school in the Surrey Hills area, so there were no buildings to deal with when the churches merged.

During October, when the pastors were focusing on merging the two congregations, they met for worship on Saturday night one weekend and on Sunday morning the next.

Beginning in November, there were two services each weekend, at 6 p.m. Saturday and 10:45 a.m. Sunday. The OK Mission apartment ministry meets at 9 a.m. on Sundays.

Since there is set up before every worship service, there is no time nor space for a traditional Sunday School, but the new church conducts a kids’ church at the apartments on Wednesday nights; a Monday night ladies’ Bible study, Wednesday night children’s  and youth groups and a men’s Bible study.

Bo Holland, church planting specialist for the Baptist General Convention of Oklahoma, said he is personally excited for the great steps these two churches have taken to ensure that they will continue to reach the lost and unchurched in Oklahoma.

“I believe the deep desire of every Oklahoma Baptist is to see every person come to know and follow Christ,” Holland said. “But many struggle with making bold changes that take us away from our comfort zone and into some non-typical activities. This is truly a big step that takes two similar visions and joins them into one stronger mandate from God, ‘Go into all the world.’”