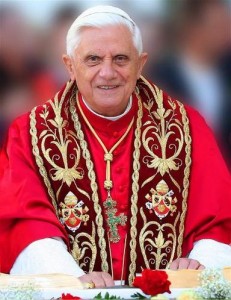 With Pope Benedict XVI’s shocking resignation this morning, evangelical Christians might be tempted to see this the way a college football fan might view the departure of his rival team’s head coach. But the global stakes are much, much higher. As Pope Benedict steps down, I think it’s important for us to recognize the legacy of the last two bishops of Rome that we ought to honor and conserve: an emphasis on human dignity.

As a Baptist Christian, I disagree with Rome on many things, of course, and some of those things relate to the nature of the Petrine ministry, the relationship of the Bishop of Rome to the rest of the church, the merging of civil and ecclesial power, and so on. It might surprise previous generations of Protestants, though, that one of the primary emphases of the Vatican in the last generation has been on the dignity and liberty of the human person.

When the world was threatened by Soviet totalitarianism, Benedict’s predecessor, John Paul II, communicated a vision of human flourishing and freedom that sparked resistance movements in his native Poland, throughout occupied Eastern Europe, and to the rest of the world. Benedict, then a cardinal, worked internally to root out Marxist mash-ups with Catholicism in the so-called “liberation theology” movements of Latin America and elsewhere.

Since assuming the papacy, Benedict has called for a counter-witness to the bloody persecution of Christians by Islamic authoritarian regimes in Africa and the Middle East, to the church-outlawing police states of China and North Korea, and to the soul-decaying secularism of Western Europe and, increasingly, the United States of America.

Benedict has countered the sexual revolution with an Augustinian view of the meaning of human personhood. A human person, he has reminded the world, is not a machine. We are not merely collections of nerve endings, that spark with sensation when rubbed together. Instead a human person is directed toward a one-flesh union, which is personal and spiritual. Destroying the ecology of marriage and family isn’t simply about tearing down old “moralities,” he has reminded us, but about a revolt against the web of nature in which human beings thrive.

And Benedict has stood against the nihilism that defines human worth in terms of power and usefulness. He has constantly spoken for those whose lives are seen as a burden to society: the baby with Down syndrome, the woman with advanced Alzheimer’s, the child starving in the desert, the prisoner being tortured. These lives aren’t things, he has said, but images of God, and for them we will give an account. When society wants to dehumanize with language: “embryo,” “fetus,” “anchor baby,” “illegal alien,” “collateral damage,” and so on, Benedict has stood firmly to point to the human faces the world is seeking to wipe away.

As Protestant Christians, we will disagree with this Pope, and with the next one, on all sorts of things. Here we stand, we can do no other; God help us. But let’s pray the next Pope, like this one, will remember what it means to be human, and will remind the rest of us when we forget.