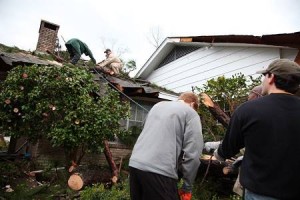 HATTIESBURG, MISS. (BP) — Temple Baptist Church in Hattiesburg was right in the path of the tornado. Church leaders huddled children and adults into safe places at 5 p.m. Sunday (Feb. 10) for protection, when the storm shifted at the last moment, sparing the church but hitting the high school next door.

Darryl Craft, pastor of the 5,000-member Southern Baptist church, is thankful for the grace, but lamenting that 63 people were injured and 300 homes and businesses damaged when at least two tornados tore through five Mississippi counties. No deaths had been reported Monday (Feb. 11).

“The high school that was damaged so severely [Oak Grove High School], it sits literally next to our church. I was [at the church] last night when the storm hit,” Craft said. “We thought it was going to hit the church but it turned and hit behind the high school and you know we’re certainly grateful that the church was not damaged, but we’re sorrowful for those people that lost their homes.”

Craft could not estimate the number of people at the church when the tornado hit, but said many were en route at the time.

“It was 5 o’clock on a Sunday afternoon. We were having some various activities so the bulk of the crowd had not gotten there. We had moved all the children and the students and the adults that were on campus into the safe areas of the campus,” Craft said. “There were so many different activities going on.”

SBDR personnel were assessing needs and preparing to activate chainsaw and blue tarp units Monday morning, but had made no decisions regarding feeding units, said William Perkins, Mississippi Baptist Convention Board (MBCB) spokesman.

“Jim Didlake [MBCB men’s ministry director] is coordinating with local churches to see what the needs are in … the area of feeding units,” Perkins said. “The count keeps going up, as areas are cleared and they get into the neighborhoods.”

Mississippi Power reported 13,000 customers were without electricity after the storm. But Monday morning, utilities had been restored to all but 4,000 homes and businesses, according to news reports. Mississippi Gov. Phil Bryant declared a state of emergency in counties impacted, including Lamar, Lebanon, Forrest, Lawrence and Marion.