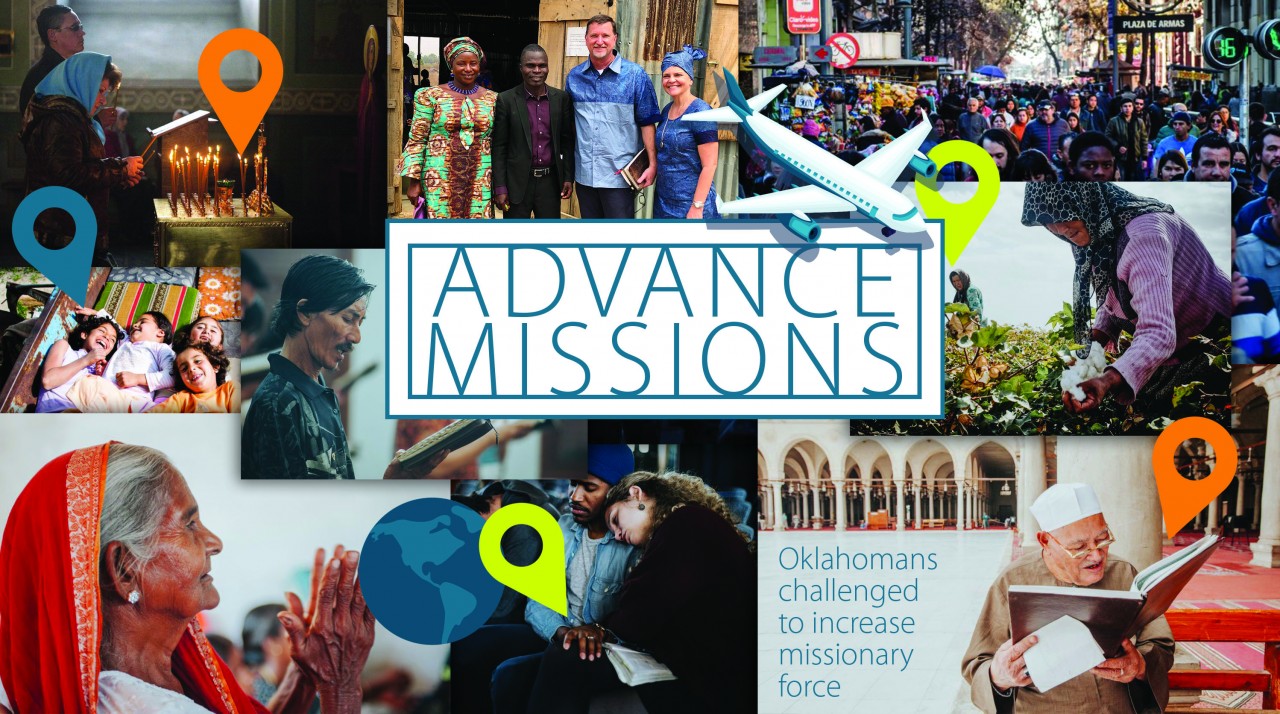 Nearly 200 Oklahomans serve overseas through the International Mission Board (IMB), including 108 who were sent out in the last five years.

Hance Dilbeck, executive director-treasurer of the Baptist General Convention of Oklahoma (BGCO), and members of the BGCO board of directors, recently expressed the goal to increase that total by 20 percent, or about 40 more missionaries, by 2025.

“This goal helps Oklahoma Baptists maintain focus,” Dilbeck said. “We advance the Gospel in our state and build strong churches, so they can produce more missionaries, and we make disciples here, so those who go can make disciples of every nation.”

Africa
“Africa is a beautiful continent with resilient people,” wrote Shawna Davis in an email to the Baptist Messenger. She lives in Kenya with her Affinity Group Leader husband Daren. Their home church is Marlow, First; they serve through the IMB in sub-Saharan Africa.

“The Father’s heart longs for Africa’s people to know the salvation brought by His Son,” Davis continued. “Oklahoma Baptists are resilient people who have been transformed by Jesus Christ. They would be able to live in difficult, remote areas and in chaotic, urban cities alongside Africans for the sake of the Gospel.”

“God is positioning sub-Saharan Africa to be the next great witness to the world, and yet there are still entire people groups who have not heard the Gospel,” Davis wrote.

A new missionary might work in a refugee camp or bush hospital, teach English as a second language, help farmers working toward crop improvement, or be a seminary professor.

Davis’ biggest “hardship,” she wrote, was being far from family, “even after almost 22 years.” A new missionary might miss “the conveniences of America,” but would find joy in “listening to African believers explain that their unspeakable persecution is worth it because He is worth it, and if they fled the persecution, who would remain to tell their family the Good News?”

Persecution exists in all 45 sub-Saharan Africa nations, Davis wrote, ranging from new Christians being fired from their job to “high levels” of persecution from proponents of Islam.

London
“London is a very strategic global city that is full of Gospel opportunities,” wrote Jacob Boss in an email to the Baptist Messenger. He and his family—wife and four young children—are team leaders for IMB missionaries in London. Their home church is Tulsa, Memorial.

“People from some of the most unreached and closed countries in the world live here,” Boss wrote. “Oklahoma Baptists have an opportunity to share the Gospel and disciple people in the business world, arts world and unreached countries who will have global reach and influence.”

More than 300 distinct languages are spoken in London, but the London team does have a plan: They are raising up nationals to start churches that multiply, including the return of some to their home countries in Africa, Asia, the Middle East and South America. The team plans for a multiplying church to be at each of the 270 stops of the London Tube (subway) system.

Additional missionaries from Oklahoma are needed to help in the gigantic task, Boss wrote. “God wants to use your profession to see His glory resounding through the nations!”

Evangelistic and discipleship classes take place at Google, Facebook, Accenture, Lloyds and Barclays, where attendees “have seen coworkers and peers within their industries become followers of Jesus,” Boss wrote.

“London is a pretty easy place to live,” the team leader continued. “The urban dynamics of public transport and the number of people who live here can be an adjustment, but it is a beautiful city to live in. Seeing lives that were utterly broken, restored and healed through the power of the Gospel. There is nothing like it!”

Former Soviet Union
Oklahomans who venture in missionary service to the former Soviet Union can expect long winters and difficulty in learning the language, but also “deep, life-long friendships, warm hospitality and the perseverance of believers despite difficulties,” wrote Will Thompson, IMB’s cluster leader for the European Affinity group.

His name was changed for security reasons. His home church is Weatherford, Trinity.

Oklahoma Baptists are needed to be part of “missionary teams in urban centers, where the conditions are harsh, but the need is great,” Thompson wrote. “These teams would be focused on evangelism, discipleship, healthy church formation and leadership development.

“What brings us, new missionaries and all believers, joy is ultimately the Gospel of Jesus Christ at work in our lives and sharing this with others,” the missionary continued. “Also, much of our role now involves serving other missionaries, and it brings us joy to serve them in a way that frees them up to devote the majority of their time to the missionary task.”

Southeast Asia
Seeing people from Thailand “come from darkness into the light, seeing them become leaders and begin to share their love of God with their people, and seeing groups formed to worship the One True God” would bring joy to Oklahoma Baptists going as missionaries to Southeast Asia, said Quinton Ratliff, who with his wife Kim serve as affinity group leaders in northern Thailand.

Their home church is Norman, Bethel.

More than 7 million northern Thai are “steeped in Buddhism and animistic beliefs and have never heard of the One True God and His Son, Jesus Christ,” Ratliff wrote.

He would like new missionaries from Oklahoma “to partner with us in teaching Bible stories in primary schools and high schools, developing relationships with Thais through youngsters’ Adventure Clubs to college ministry, assisting in sports, English and adventure camps, discipling new believers and starting new groups to become churches.”

Sharing here AND there
“We give generously through the Cooperative Program, not to pay someone else to do our work but to support our Oklahomans around the world,” Dilbeck said. “We invest in Falls Creek, Oklahoma Baptist University and Baptist Collegiate Ministries in Oklahoma that will produce another generation of missionaries.

“We do not accept an either-here-or-there mindset,” Oklahoma Baptists’ executive director continued. “Gospel advance is about here and there.”