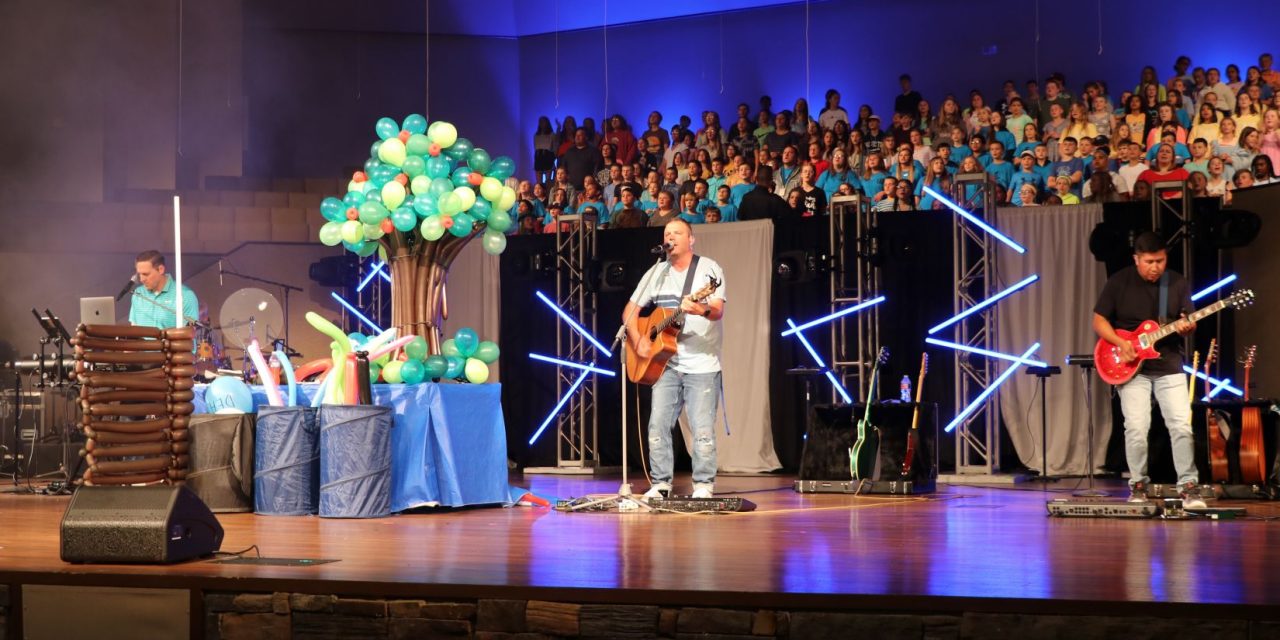 DAVIS—What started 41 years ago with a few state associations partnering together to have camp for children has grown to become a mainstay kickoff event for summer camps at Falls Creek Conference Centers. 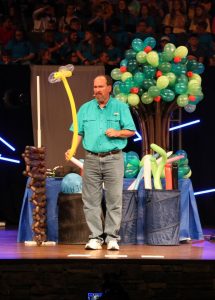 Camp pastor Steve Winger juggled and used balloon images to present the ‘I AM’ statements of Jesus.

ACC is now comprised of 15 associations’ directors of missions participating in the leadership of the camp, and this year’s leaders are thrilled ACC is back after the pandemic prevented the camp from meeting in 2020.

“We are overwhelmingly excited that parents are willing to let their children come and participate,” said James Wilder, director of missions (DOM) in Pottawatomie-Lincoln Association. “This is a blessing.”

Wilder has experienced ACC in different capacities—as a pastor who sent children to ACC, as well as a camp pastor and now in camp leadership among DOMs. He appreciates how ACC has impacted many children over the years.

Kingfisher, Frist praise band and the champ choir led worship through singing during the evening services.

“For 15 associations to work together for all these years,” Wilder said, “it’s beautiful to see, especially how God has blessed ACC every summer we have had camp.”

Preston Collins, director of missions in Union Association, served as ACC program director and emphasized how God has used ACC to make an impact on children over the years through the camp’s emphasis on the Gospel. 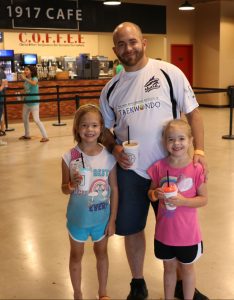 “We believe every kid should have the opportunity to hear the Gospel in a way they can understand it,” he said. “We believe in the power of God and the work of the Holy Spirit and that salvation comes by His work. He knows when the timing is right in a child’s life. When the Holy Spirit is working on their hearts, and they have heard the Gospel, they can be ready (to make a profession of faith).”

Steve Winger was the camp pastor for both sessions this year. Known as the “Juggler for Jesus,” Winger has a calling, Collins said, for communicating the Gospel. Winger shared messages involving the “I Am” statements of Jesus Christ through his juggling performances and using balloon animals and other images.

Others involved in ACC programming included Zack Potts who is an illusionist who presents the Gospel through his illusions. Shadrack Black who serves with Baptist Global Response in Africa served as the camp’s missionary and spoke during the morning sessions. The praise band from Kingfisher, First, led times of worship through music throughout the services at ACC.

Another feature at ACC is a children’s choir, led by Ken Bartholomew, as campers filled the choir loft during the evening services.

“The best for me is listening as the children participate in worship and singing corporately,” Wilder said. “It doesn’t get more beautiful than that.”

Wilder also said he appreciates the work of Andy Harrison, director of Oklahoma Baptist Conference Centers, and those who are serving at Falls Creek this summer.

“Getting to work with the Falls Creek staff, I think you see Oklahoma Baptists at their best,” Wilder said.

Collins said ACC will continue to be an outreach opportunity for Oklahoma Baptist churches to reach the children in their communities.

“What (ACC) does at the beginning of the summer is it lets the kids and adult sponsors (of Oklahoma Baptist churches) connect with one another and form relationships,” Collins said. “They can go on through the entire summer, as they are back home and in the church. Whether they do VBS, mission activities or block parties, these kids and these adults have connected. We believe we have strengthened the church by this outreach opportunity.”

UPDATE: From the final count, ACC reported a combined attendance of both sessions to be 5,082 campers. There were 418 campers making professions of faith and a total of 612 spiritual decisions.