A winning way: Coach, pastor mentors on the field and off 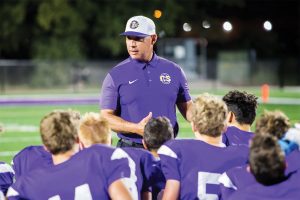 In addition to his role as pastor, McIntosh serves as athletic director and high school football coach for community Christian School in Norman. [Photo by Jim & Lisa Photography]

NORMAN—Both occupations build people up and offer encouragement. They both speak impassioned words on a regular basis. And they both are well-known jobs on the field of life.
Today’s pastors and coaches have many things in common.

It just so happens that at least one man in central Oklahoma literally does both. Pastor Mat McIntosh of Norman, Blue Lakes, also serves as athletic director and high school football coach for Community Christian School (CCS) in Norman.

The multi-vocational pastor began as a church planter more than 11 years ago and now pastors the congregation which has an average Sunday School attendance of 70 weekly.

“I have been at Blue Lakes for about five years,” McIntosh said. “We moved to Norman about 11 years ago to plant a church, and a great group of people eventually moved over with Blue Lakes, where I serve as pastor.”

He said, “When we moved to Norman to plant a church, CCS asked me if I’d be their head baseball coach. I did that role up until this last season, and I have been the athletic director and football coach for the past five years.”

Mat himself is an athlete and has long been involved in sports, as well as ministry.

“I have been in ministry since my freshman year at college. As a teen, I felt called to ministry. I grew up playing sports, grew up around it. My dad was a bivocational pastor and coach. When I got into high school, he got out of coaching and pastored full time. All my life I have been around it.”

McIntosh loves pastoring and coaching. “I see similarities in the two roles,” he said. “The whole reason I began to coach, it was a good way to reach and minister to young men, a unique opportunity because they give their coaches sometimes greater influence than anyone. That aspect from the beginning was powerful. Although I’m highly competitive, we are doing this for a bigger reason, not just for scores and points. 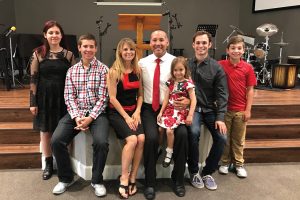 Pastor Mat McIntosh of Norman, Blue Lakes, pictured with his wife Jennifer and their children.

“What God has done with my role at the school, it started at baseball. Every week at CCS, I get to do the chapel at the Upper School. I get to preach to 350 teenagers,” he added.
Mat and his wife Jennifer have been married 24 years and have five children, ages 5 to 21.“We h

ave an active family,” he said. Their 21-year-old son Haddon plays baseball at USAO in Chickasha. Their daughter Eden, 19, is a freshman at Oklahoma City Community College, and their son Boyce is a freshman in high school. Their youngest son, Tyndale, is in the sixth grade, while their youngest child, Piper, is in kindergarten.When

“Losing is painful to me,” he said. “This past season, we had a rough year, partly because our team had just moved up classifications to 2A football.” Just a few years back, the school was playing eight-man football only against other private schools.

McIntosh kept his chin up in spite of the losses and setbacks, and has high hopes for the upcoming football season. “We think this year can be a turnaround,” he said.

In addition to potential progress on the field, Mat has seen spiritual fruit come from his coaching.

“This past year in the midst of a losing season, we had two young men on our team come to know the Lord,” he said. “I have been blessed to have an impact on some student athletes. We had a young man attend CCS, who did not know the Lord but now does. Our school used football to change his life. We always talk and pray when the game is over. His life was changed so much that we could not get him to stop wanting to pray. He just bloomed. All that is why we do what we do.”

Beyond the players and Xs and Ox of football, Mat stays grounded in God’s Word, and he believes God is growing the Blue Lakes congregation.

“The biggest thing I love about pastoring is getting to pour in the same people week after week,” he said.

Win or lose in this upcoming season, McIntosh knows that the church will continue grow and flourish in God’s hands.

“We just love the church, which is the Body of Christ for the spread of the Gospel and for the shaping of lives of others,” he said.

Throughout his life of coaching and pastoring, it is clear that God has been shaping McIntosh’s life as well. And that’s the best kind of win there is.