A time to pray: Oklahoma Baptist Board meets, spends time in prayer 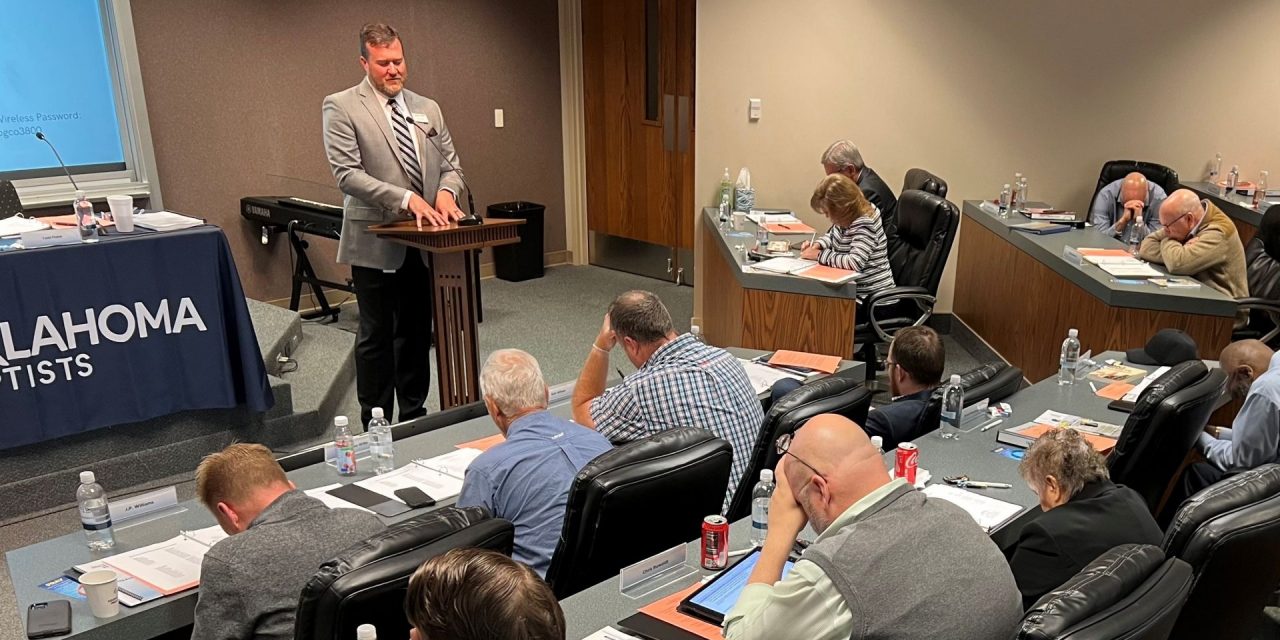 Above: Todd Fisher prays during the May 24 Oklahoma Baptists Board of Directors meeting.

On May 24, members of the board of directors for Oklahoma Baptists met at the Baptist Building in Oklahoma City for a regularly scheduled meeting.

In addition to times of fellowship, business and meetings, board members spent extended times in prayer for the Southern Baptist Convention (SBC) in the wake of the SBC Sexual Abuse Task Force report.

Oklahoma Baptists’ Executive Director-Treasurer Todd Fisher addressed board members and led in the times of prayer.

“As our hearts continue to grieve the findings of the (SBC report), we want to pray for each and every one of the abuse survivors and everyone impacted by this. We pray that Southern Baptists, as we gather for the Annual Meeting next month in Anaheim, will take appropriate action on the recommendations stemming from the SBC report,” Fisher said.

“I am thankful that Oklahoma Baptists have already taken proactive steps toward preventing abuse and toward caring for abuse survivors,” Fisher said. “Led by Oklahoma Pastor Eric Costanzo, Oklahoma’s Abuse Prevention and Response Task Force, has already been meeting and working toward forward-looking best practices for Oklahoma.

“This is a pivotal moment for the SBC, as we each do our part to protect the vulnerable among us,” Fisher added. “I want to ask all Oklahoma Baptists to dedicate themselves in fervent prayer to the Lord for all these urgent matters.”

During the afternoon plenary session, Fisher described his first few months serving in the role of executive director, sharing how he has traveled to dozens of Oklahoma Baptist churches and associations.

“I have so much enjoyed meeting Oklahoma Baptists from across the state,” he said. “In conversations with some 400 pastors, I have sought to listen and to hear more about their ministry context. I also have shared some things on my heart.”

Fisher added that he is hearing churches want to focus on Gospel ministries as a state convention, like mission partnerships, having localized events and church revitalization and church planting.

“I have been emphasizing three key areas: Baptist polity, Baptist beliefs and Baptist partnership through the (Cooperative Program),” he said.

Fisher asked board members to pray for pastors, many of whom experienced a season of unique challenge and may feel “isolated and empty, needing encouragement and our prayer.”

He shared with board members that he is hosting Pastor Fellowship times during Falls Creek summer sessions and Indian Falls Creek.

“On Tuesdays at 2 p.m. at Falls Creek’s Mathena Family Event Center, we will have a time of fellowship for pastors, with refreshments. This is just a time to connect and encourage one another,” he said.

Also a Pastor Fellowship Dinner is taking place at 5:30 p.m. each Tuesday of Falls Creek, sponsored by the Tom Elliff Center for Missions of Oklahoma Baptist University (OBU). To register visit okbu.edu/elliff-center.

Pastor Chris Wall of Owasso, First, who serves as president of Oklahoma Baptists, voiced gratitude “for the ways the Lord is already blessing churches through Todd Fisher’s efforts.”

Jeremy Freeman, pastor of Newcastle, First, chairman of the communications/CP Committee, presented a joint motion from his committee and the Executive Committee, to adapt the Baptist Messenger in 2023 from two print editions per month to one, expanded print edition per month. The motion was unanimously approved by board members.

“The one-per-month print edition, beginning in 2023, will be mailed to all current subscribers at no out-of-pocket cost to subscribers,” said Brian Hobbs, editor of the Baptist Messenger. “This expanded edition will include all of the content the Baptist Messenger readers currently enjoy. We will also make available two digital editions per month for free download.”

Hobbs noted that due to increases in the cost of postage and printing, many state convention have discontinued a print edition altogether.

“in addition to the print edition, we will harness all of the digital and online tools of technology we can to share the Good News, through our publication,” Hobbs added.

In other approved motions, board members approved a CrossTimbers fee increase of $15 per session, from $150 to $165, that would take effect in the summer of 2023. These monies will go directly toward improving the camp and paying summer staff members.

The next regularly-scheduled board meeting is Sept. 13 at Falls Creek Baptist Conference Center.