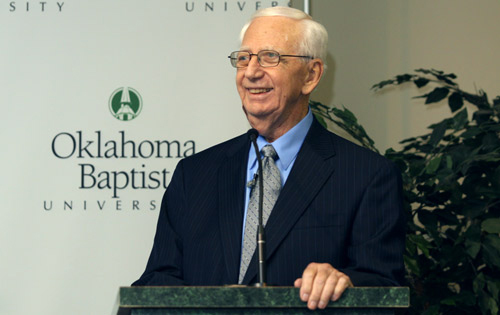 When the decision was made to host a dinner on the campus of Oklahoma Baptist University (OBU) in honor of Avery Willis earlier this year, many were concerned that he either would not be able to make the trip or that he would die before March 4— the date chosen for the event.

Only weeks earlier, Willis himself announced to the world through Twitter (Willis always desired to make maximum use of the latest technology) that he had been diagnosed with leukemia.

News of his condition quickly circulated throughout the Southern Baptist Convention as thousands sent him direct messages through Twitter and e-mail informing him of their prayer for him.

To the surprise of many, Willis’ health improved so much that when he arrived at the Geiger Center on OBU’s campus, he appeared frail, but engaged. As people entered the reception, Southern Baptist leaders such as Jimmy Draper, Tom Elliff and Anthony Jordan expressed a bit of a surprise that Willis’ health had improved so dramatically in such a short period of time. During the formal program, Draper and Elliff took time to recount to the audience just how Willis had impacted not only their lives, but also the entire Southern Baptist Convention.

Willis knew that any large organization, including large missions organizations, could become captive to the status quo—frozen in time as the context of missions changes.

“Churches can fall behind the culture to such a degree that the message we speak no longer resonates with the culture where they live,” Willis said in one of the last interviews he gave prior to his death. “We must constantly be challenging ourselves to rigorously look at what we are doing and why we are doing it or we will quickly find ourselves captured in a system that paralyzes our witness even as we proclaim that we are on the cutting edge of sharing the Gospel.” 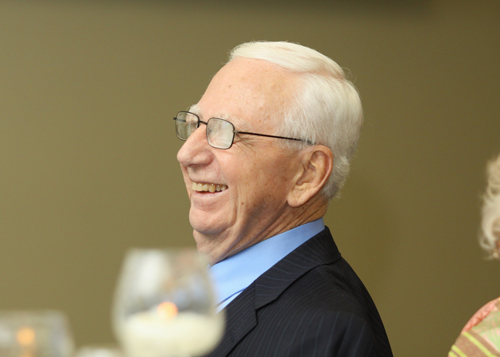 It was Draper (a man many still regard as the main person responsible for Willis’ notoriety in SBC life) who helped launch Willis’ vision about a plan of discipleship that would directly interact with Holy Scripture, aid in spiritual formation for young (or even mature) Christians and plot a path forward that could easily be replicated throughout every church in the Southern Baptist Convention.

Masterlife was that vision. By his own admission, however, it was not his “first love.”

Willis was a missionary—a pioneer of sorts—who was invigorated when he could push limits and cause others to join him in a new endeavor. One of his most cherished service opportunities came when he served as professor (and later president) of the Indonesia Baptist Theological Seminary. Willis taught courses across the entire theological curriculum and developed a cadre of leaders able to serve local congregations who were taught to start churches among their own people groups.

“I learned in that place never to shy away from the life of the mind and the heart of a disciple,” Willis said as he reflected on that time. “A passion for church planting was born in my heart in that context and it is there I learned more about what the Bible actually said about reaching the world with the Gospel of Jesus Christ.”
Willis always felt that many American Christians saw the world merely in geo-political terms.

“The Bible is not simply concerned with human governments and the ways various organized cultures live and work—as important as that is,” Willis said. “The actual word in the Bible is people groups, and we must be about reaching every people group with the Gospel of Jesus and fulfilling the Great Commission.”

Oklahoma Baptist University
Willis’ early life began in rural Arkansas. By the time he arrived in Shawnee to study at OBU, something had happened to him.“In many ways, I cannot explain it,” he said. “I loved this school, and after chapel or a particular class, I would walk around the campus praying and asking God what He would have me do with my life.”The years at OBU marked him with a missionary fervor.

He was a student during turbulent times in the United States, and some of those national tensions were felt at OBU. He remembered when Herschel H. Hobbs, then pastor of Oklahoma City, First, made a motion at the Nov. 29, 1955 trustee meeting allowing African-Americans to be admitted to OBU.“For me, it was one of the greatest triumphs of OBU because it distinguished us as people of real gospel integrity,” he said.

As a student, he studied the various writings of Baptist theologians, but he always showed an aptitude to read outside of his own tradition.“Even though I was born and raised in the South and was a Southern Baptist, I wanted to know what other Christians thought and did,” he said.

“I remember the chatter among everyone when a new chapel being built here was announced,” Willis recalled. “It was during a real boom for the university and even Sen. (Robert S.) Kerr came over and helped dedicate a building or two.”After graduation from OBU, he continued to study the Bible and theology at Southwestern Seminary, followed by a series of pastorates in Oklahoma and Texas.

Missionary to the End
Willis’ ever-developing passion was missiology—the formal study of it and the real practice of it. Most people always remarked that if Willis was not speaking to someone about missions, he was reading about it.“I love to read and write, and I’ve always believed that the more I read the more I would learn about everything,” he was fond of saying. “In our day, I’m scared we have an aversion to real learning, and I pray we will get past that,” he said.

He always wanted to energize younger generations to prepare themselves for missionary service—no matter their vocation.“For some reason, we have fostered the belief that unless you are a career missionary, you shouldn’t be involved in missions,” he said. For Willis, just the opposite was true. “I am praying that the church get out of our own tents and into the world where the people are.”

When OBU first established the Avery T. Willis Center for Global Outreach, he was convinced it could be a resource for local churches. “This place is designed to be a place where research meets passion—a place where the Gospel is launched from the place it was first birthed in my heart.”

“Avery Willis helped us greatly to cast a vision for what this Center could become for our students and the churches across the nation and the world,” David Whitlock said.Toward the end of his life, his missiological interest turned toward orality—a pedagogical and theological term describing the way people learn who are not “native readers.” He realized that most of the world was illiterate, and most missionaries were attempting to reach them with literary means.

“I know this can be a controversial issue as we are people of the Word of God,” Willis said. “But I think there is something to be said for ways of interacting with people groups who cannot read and helping them understand the themes of the Bible with such careful detail in the way that we speak to them about Jesus that they understand the Gospel.” He did not believe that the issue of orality in missions was something to be feared or shunned.

“We must engage the thousands of people groups who cannot read and help them understand the truth of the written Word of God,” he said. “ Sure, we should follow the example of the Church throughout the centuries and teach people to read, but we must also quickly get the Gospel to them in ways that impact their hearts with the truth of God’s Word or they will die without Jesus.”

In 2004, he served a critical role in the establishment of the International Orality Network. Even in the waning days of his life, he was working to establish more mission partnerships within this network of missiologists, denominations and local churches. On July 27, Willis sent out a message on his Twitter account: “Leukemia is back, and the doctors feel treating it will push me over the edge. I may go home Wed. to die at home rather than at the hospital.” Three days later, he died.

“When we heard about Avery’s death, we were shocked, sad and joyful all at the same time,” Whitlock said. “As members of the OBU family, we wondered what this day would be like when it finally came, and we found it harder than we thought.”

Whitlock remembered Willis’ kindness to him when he was first named as OBU’s president.“I’m not sure anyone could be more kind, and I will always remember him as an example of what I pray every graduate of this institution might become by God’s grace.”

Jordan, executive director-treasurer of the Baptist General Convention of Oklahoma, heard of Willis’ death while in a meeting.“We miss him already, but we know that he is at home with the Lord Jesus,” said Jordan, who added that Willis died as he lived “with passion and absolute trust in the promises of God. We are the better for having known him and we pray our lives might mirror his own as he served the Lord Jesus Christ to the very end.”