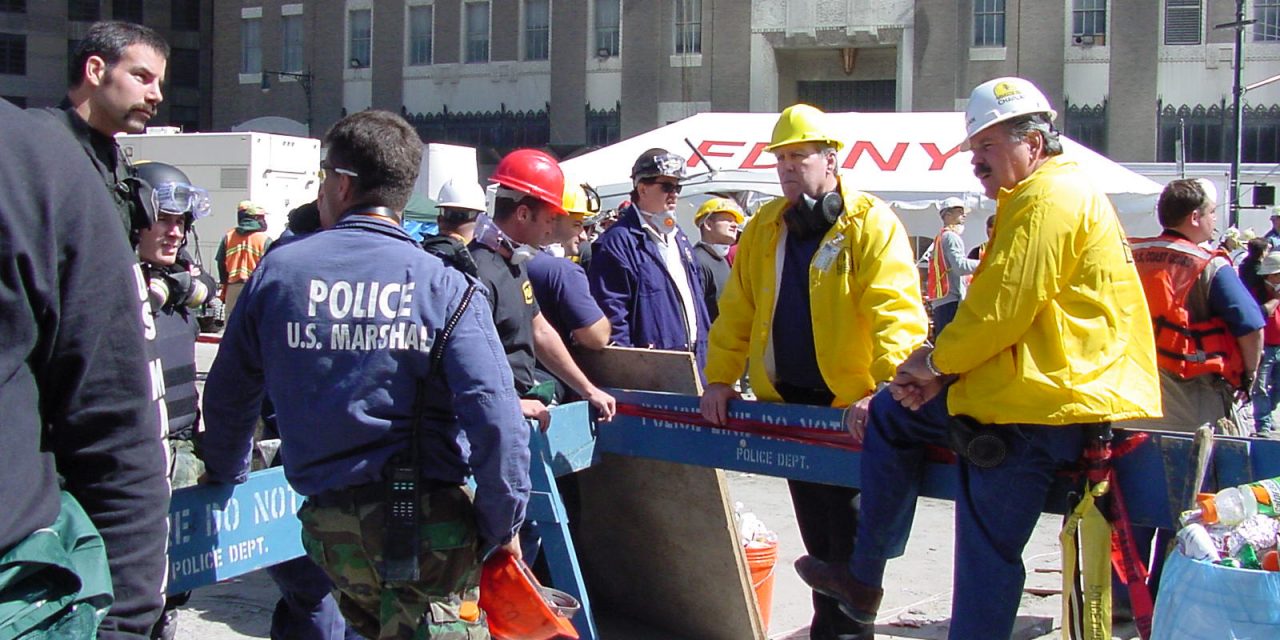 NEW YORK CITY (BP)—Twenty years after spending weeks in what could only be called a war zone, Southern Baptist Disaster Relief (SBDR) volunteers are reflecting on their experience working in the immediate aftermath of 9/11 and how it affected their lives.

Sam Porter is the national director for Southern Baptist Disaster Relief for Send Relief with the North American Mission Board (NAMB). At the time of the 9/11 attacks, Porter was serving as the disaster relief director for Oklahoma Baptists. He said he remembers the events surrounding 9/11 “very vividly.” 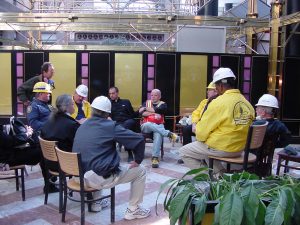 Chaplains organize their shifts for work at the temporary morgue at Ground Zero. File photo by Bob Nigh

Even before the second World Trade Center tower collapsed, Porter was on the phone with NAMB’s national disaster relief director making plans to take a relief team to New York.

Because a majority of flights around the country were canceled after the day’s events, Porter and his team flew to New York on a private plane Sept. 12.

The pilot had to ask the Federal Aviation Administration for permission to fly. Permission was granted due to Southern Baptist Disaster Relief’s efforts after the Oklahoma City bombing in 1995, when Porter and his team had served in the days following the attack on the Alfred P. Murrah Federal Building. 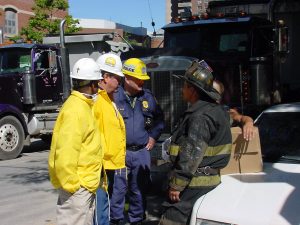 Their service was remembered, and the government asked the team to fly to New York as soon as they could, something Porter said is just one example of God opening doors for them to be able to minister at Ground Zero.

Once the team arrived in New York the morning of Sept. 13, they steadily established a relationship with the head of security for the New York Police Department, who observed the way they were caring and praying for first responders. He gave them permission to minister any way they saw fit, despite their not having official clearance to be at Ground Zero.

Porter was eventually asked to be one of the leaders of the chaplaincy efforts at Ground Zero. Southern Baptist DR teams from around the country were slowly but surely given access to come volunteer, and Porter said teams were volunteering in the area until it was closed off in May of 2002. 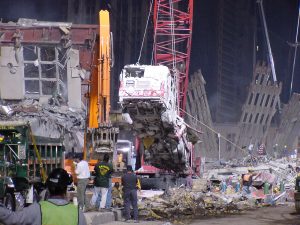 A demolished firetruck is lifted out of the debris at Ground Zero by a crane. File photo by Bob Nigh

SBC Executive Committee President and CEO Ronnie Floyd praised the way Southern Baptists around the country responded to the shocking and challenging time in the nation.

“While fear gripped the nation and the world, pastors and churches joined a unified call, placing our faith and hope in the Lord. Attendance to local church worship services grew in the weeks following as America focused on the need to talk to God and depend on His power in this national time of spiritual need. Through our cooperative work as SBC churches, we did whatever was needed to be done at the time. I have not seen America more unified and resolved since 9/11 and the weeks and months following.”

Porter said ministry at Ground Zero generally involved caring for and praying with first responders and serving food in partnership with The Salvation Army.

One of their main ministries was connecting with first responders and simply asking them to tell them their story. Often, a connection was made when volunteers said they were from Oklahoma and were acquainted with some of the trauma that can result from terrorist attacks.

Porter said the ministry work included many difficult things, such as praying over the remains of every person who was uncovered from the wreckage before the remains were moved on for attempted identification. Still, the team was grateful for the opportunity.

“We knew God had us there for a reason to make an impact. … It was a great honor for us to be there and tell people about the hope of Christ Jesus,” Porter said. “I’ve never prayed as much or cried as much in my whole life, but God made a big difference.”

While Porter was a DR veteran when he went to Ground Zero, Nancy Hubbard was not. In fact, it was her first assignment.

Hubbard, who was 62 at the time, first heard about Southern Baptist Disaster Relief from a presentation at her Georgia church. She later visited a DR effort going on in Florida and was immediately “hooked,” she said.

“Being a Christian, I always wanted to do things to help people, and this was ideal for me,” Hubbard said. “I like to be out working so this was perfect. I was able to meet new people and new Christians that you have something in common with. It was just God-sent for me.”

“I went not knowing a soul,” she said. “When we went up there, we didn’t know what we were going to do. We just said, ‘We’re here; where can you use us?’ It was devastating to watch what was left, and it was eye-opening.”

Hubbard, now 82, is retired, but has no plans to stop volunteering in disaster relief. Just this week, she was in Louisiana, helping clean up after Hurricane Ida.

“I hope the Lord will allow me at least a couple of more years of doing this work because I truly love it,” she said. “It seems like when I go on these trips, I forget my age and my energy just hits the top rung and I’m just ready to go.

“You just meet the most wonderful people with the best attitudes that you could ever even imagine, the people that run into just makes it worthwhile. You know you’ve helped somebody that really needs it.”

Porter said the impact SBDR teams made at Ground Zero is still felt today, as disaster relief efforts increased throughout the states over the next 20 years, and Southern Baptists now have “a seat at the table,” among national relief agencies.

He added that the unity displayed by the country in the aftermath of 9/11 is the type of unity that is now desperately needed for Southern Baptists as followers of Christ.

“We have to base our beliefs and our ministry on the Word of God, and realize that we serve God, not each other,” Porter said. “We serve because He’s called us, and there’s so much we can do now through Send Relief to bring help, hope and healing.

“For the Southern Baptist Convention to come together, we have to go back and see what the Bible says about us going forward. If we go (to fulfill the Great Commission) in any other power expect the name of Jesus Christ, we will not be together, and we will be divided.”