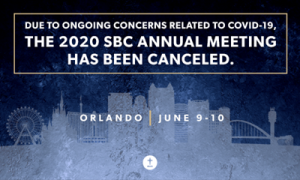 NASHVILLE, Tenn. (BP)—In response to the COVID-19 pandemic, the Southern Baptist Convention (SBC) Annual Meeting has been canceled for the first time in 75 years.

Citing authority provided by the SBC Constitution “in the case of grave emergency,” the decision was made Tuesday, March 24, in a unanimous vote of a body composed of SBC officers, the SBC Executive Committee and leaders of the SBC’s boards and institutions.

The Annual Meeting, which was originally scheduled June 9-10 in Orlando, is not being rescheduled. SBC President J.D. Greear, pastor of The Summit Church in the Raleigh-Durham, N.C., area, said he was “saddened” to make the announcement, but described it as necessary in light of the ongoing crisis and the uncertainty of when it might end.

“We are a people committed to keeping the Gospel above all,” Greear said, “and our sole purpose in coming together is to support one another in that mission, catalyzing our collective mission efforts. This year, our unusual circumstances mean we can best meet that goal by not meeting together.”

In an attempt to slow the spread of the coronavirus, which threatened to overwhelm the nation’s healthcare system, government officials at national, state and local levels have declared states of emergency and encouraged or required extreme social-distancing practices, as well as the closure of many businesses, stores and restaurants. Current federal guidelines, including a recommendation to avoid gatherings of more than 10 people, have been adopted at various levels—sometimes as mandatory orders. In some places, residents have been ordered to stay home.

Convention organizers had anticipated the 2020 SBC Annual Meeting might draw the largest number of messengers since nearly 12,000 participated in the 2010 Annual Meeting, also in Orlando. But Ronnie Floyd, president and CEO of the SBC Executive Committee, said continuing uncertainty over whether and when large groups would again be able to gather—as well as concern about when it would be prudent to do so—prompted the move to cancel.

Calling the SBC Annual Meeting “the most pivotal gathering we have as we advance our commitment to reaching the world for Christ,” Floyd said SBC leaders were “faced with a decision that none of us believed we would ever face,” and described the cancellation as “heartbreaking,” but said, “the reality around us nationally and globally cannot be ignored.”

“We know it is the right thing to do,” Floyd said. “We are extremely disappointed in having to make this decision, but God will see us through and give us a way until we are able to meet in person together again… We know our churches need to focus on ministering to their communities and to those who have been impacted by the COVID-19 global pandemic.

“While we will not physically be coming together in June in Orlando, we will be going together in unity as we minister to our churches, our missionaries, our church planters, our seminary students and our own communities.”

The last time the SBC Annual Meeting was canceled was 1945, during World War II, when the United States government banned meetings of groups larger than 50 people. The SBC was preparing to celebrate its 100th anniversary, but instead skipped a year.

The protocol followed Tuesday was instituted by messengers to the 1946 SBC Annual Meeting. The historic decision, set out in SBC Constitution Article XI, Section 4, was reached during two video conference calls.

Mike Stone, chairman of the SBC Executive Committee and pastor of Blackshear, Ga., Emmanuel, said while the decision involved consideration of legal, financial and constitutional factors, he viewed the decision “as a pastor, not a board chairman.” He added that the fact it was the first cancellation in 75 years “proves this is not a decision that is made lightly.”

“While the constitutional process of voting to cancel is a simple one that involves around 100 leaders,” Stone said, “the information needed to actually make the wisest decision is quite involved. The EC staff, officers and legal counsel worked diligently to consider the various results of cancellation.”

The 2021 SBC Annual Meeting is scheduled for June 15-16, 2021, in Nashville. According to the SBC’s governing documents, postponement of an annual meeting is only an option “if the entertaining city withdraws its invitation or is unable to fulfill its commitments.”

The SBC president has authority to convene a special meeting with the concurrence of the other officers of the Convention and the Executive Committee, but no such action is being taken at this time.

Holding the SBC Annual Meeting either online as a virtual meeting or at various satellite locations is not an option under the SBC’s governing documents.

In its meeting in Sept. 2019, the Executive Committee declined a referral made during the 2019 SBC Annual Meeting to study the feasibility of distance voting and remote participation in SBC annual meetings. The motion was one of many similar ones made over the years. In declining to study the idea, the EC cited reasoning that had been cited in declining earlier motions, including:

The complexity of implementation; the vulnerability of sessions to potential technology failures; the accuracy of voting; and the mechanics of conducting business sessions, with messengers seeking recognition for debate. There’s also no precedent for official business to be conducted using virtual methods at annual meetings of SBC state conventions.

With the cancellation of the Annual Meeting, SBC officers would remain in office until their successors are elected at the next annual meeting. Members of many committees would remain in office, as well. The expiring terms of trustees of Convention entities would depend upon each entity’s individual charter.

With the cancellation of the 2020 Annual Meeting, all ancillary meetings that would have been held in the convention space have also been canceled.

Bill Townes, chief financial officer for the SBC Executive Committee and convention manager for the Annual Meeting, said the Executive Committee staff would immediately begin the process of “reviewing and assessing all contracts and obligations related to the 2020 SBC Annual Meeting.” Townes said organizers would reach out directly to pre-registered messengers, exhibitors and ancillary event planners. He said many questions would be answered in an FAQ section published on the SBC website, adding the section would be updated as needed. Townes suggested emailing other questions to SBC EC staff at annualmeeting@sbc.net.

“The headquarters of the SBC is not in Nashville or Orlando,” Greear said, “nor is its primary impulse for ministry what happens on the Convention floor. The headquarters of the SBC is the local church. Our strength is in its pulpits and pews. God has now given us a new challenge, and as He promises, He will give us grace sufficient for that challenge.

“My prayer is that when we come together in Nashville in 2021, we will find ourselves stronger than ever and rejoicing that our God was with us.”