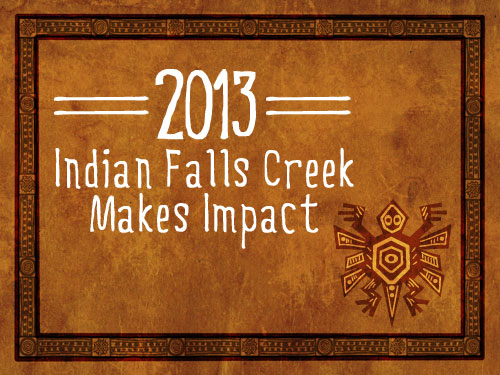 DAVIS—For more than 65 years, the Indian Falls Creek (IFC) Baptist Assembly has acted as a powerful time for missions, ministry and equipping Native Americans from across Oklahoma and the United States.

More than 2,300 attended the 2013 Assembly, meeting July 28-Aug. 1, representing hundreds of churches and dozens of tribes. The 2013 IFC, which was home to a variety of daily activities, Bible studies and fellowship, was historic in various ways.

On July 29, Anthony L. Jordan, Executive Director-Treasurer for the Baptist General Convention of Oklahoma (BGCO) unveiled a new book specifically about the history of IFC. Called Making A Difference: The Impact of Indian Falls Creek, the book, which was commissioned by the BGCO, was written by Oklahoma State University history professor Michael D. Thompson and traces the story and impact of IFC.

“This is the largest and greatest gathering of Native American Christians in the country, and Thompson has written a compelling and excellent telling of its rich history and importance,” said Jordan. “It is such a blessing to see how God has used Indian Falls Creek to make a tremendous impact.”

Jordan, who presented book copies to IFC and Native American leaders Victor Cope and Bill Barnett, also announced that the BGCO has established a full-time staff position of Native American specialist and that Emerson Falls, pastor of Oklahoma City, Glorieta, will fill that position.

“There’s no more capable and respected leader than  Falls,” said Jordan. “In his role, he will focus on leadership develop among our Native peoples, church revitalization and continue the emphasis in church planting.”

Falls, who has served in a number of leadership roles with the Southern Baptist Convention, including as BGCO President, will make the transition from the pastorate to this role beginning in September.

“I appreciate your confidence, and I covet your prayers,” said Falls, to the IFC assembly who received the news with grand applause.

The IFC camp pastor was James Swain, who serves as director for Falls Creek Conference Centers. Preaching out of Romans and basing his sermon on the IFC theme of “Gone Fishing” (Matt. 4:19), Swain said, “Christ called us to be fishers of men.

“When fishermen don’t fish, they fight. As I look out among our churches nationwide, it saddens me to see we have more people fighting than fishing,” he said.

During the morning and evening worship service, IFC participants were presented with the Gospel and given an opportunity to respond. Many decisions for Christ were made.

One attendee, Kate, from Lawton who is a member of the Comanche tribe, brought her grandchildren to the intergenerational camp, had lost her sister just days before camp.

“My sister passed away on Sunday,” she said through tears. “It was hard, but we still came to camp and my grandson prayed to receive Christ.”

Another attendee, Josh Leadingfox, came all of the way from Florida. “Our church (Immokalee First Seminole) brought 20 this year,” he said. “Indian Falls Creek means so much to me. It is where I accepted Christ. It is where I was called to the ministry. It is where I met my wife,” said the 28-year-old pastor.

Many of the tribes were able to present songs in their native tongue during the services, where attendees also enjoyed music from other groups, such as the Joyful Sound special needs choir from Edmond, Henderson Hills.

“Indian Falls Creek belongs to all,” said IFC Board of Directors Chairman Bill Barnett. “As members of nations gather this week, we believe our God will work marvelous deed among us.”

At the time of this writing, there were 100 professions of faith, 76 rededications, 14 assurances of salvation, as well as other decisions. The 2013 IFC event truly was a place where God was at work.