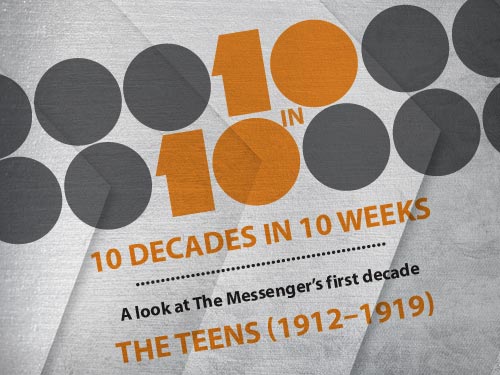 Oklahoma Baptist papers go back to 1844 when the first issue of the Cherokee Messenger rolled off the presses. That was the first paper printed in Indian Territory and the first Baptist paper of any kind in the Territory.

Publication of the Cherokee Messenger was suspended in 1846, and revived in 1858, but did not survive long.

Records show other Baptist papers emerged for a brief time, including  The Indian Missionary, Baptist Watchman, Baptist Beacon, The Baptist Oklahoman and The Signal.

When C.P. Stealey, founder and first editor of the Baptist Messenger, started the publication in 1912, it was privately owned. It wasn’t until 1919 that the Baptist General Convention of Oklahoma purchased the paper for $5,000; $500 payable within 90 days, $2,250 payable in one year and $2,250 payable in two years.

The first edition of the Messenger was timed to be distributed at the first Southern Baptist Convention annual meeting ever held in Oklahoma. There were 1,250 messengers gathered at the new auditorium of Oklahoma City, First, which had been dedicated just a few months earlier. 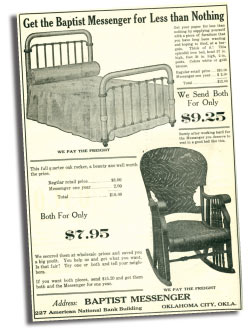 The first issue contained articles about the work of the Foreign and Home Mission Boards, Christian education, the state Baptist Orphans Home and a statement about the benefit of the annual meeting of the Southern Baptist Convention to the five-year-old state.

Along with news items from other states scattered throughout the publication, there were reports from several state churches and a stirring account of a revival meeting conducted at Oklahoma City, First by George W. Truett, pastor of Dallas, Texas, First, in which there had been 50 professions of faith.

In his first editorial, Stealey wrote: “This paper will earnestly support the organized work of the state and shall ever seek to be a helpful factor in solving the problems that are before us. We sincerely desire to be used for the glory of Christ and His cause in this state of abounding opportunity.”

Stealey served as editor during World War I, and many of his editorials reflected on the battle going on in Europe. He also called for the establishment of a Baptist school and penned a resolution against modernism at Falls Creek.

Throughout the first decade of publication, there were continuing news items about Building a Denomination, Woman’s Baptist Missionary Society and a weekly column titled “Kingdom Men and Movements,” which gave news items about churches and staff.

During the Messenger’s first decade, the publication contained numerous tips on health, beauty, some recipes and house cleaning shortcuts and even a few jokes.

The decade of 1910-1919 was a tumultuous one as the growing United States filled out its continental outline with the admission of the 47th and 48th states: New Mexico and Arizona, respectively, on Jan. 6 and Feb. 14, both in 1912.

Politically, reform was the word of the day in 1912 as Bull Moose Party Candidate Theodore Roosevelt overcame an assassination attempt on Oct. 14, but couldn’t overtake Democrat Woodrow Wilson at the polls as the latter won the presidency by a landslide. Republican William Howard Taft finished a very distant third.

The “unsinkable” British passenger liner Titanic struck an iceberg off the coast of Newfoundland on its maiden voyage late on the evening of April 14, 1912 and sank in about two hours, killing some 1,500 people; only about 700 survived.

• May 31, 1913: The Seventeenth Amendment to the U.S. Constitution went into effect, providing for popular election of U.S. Senators, who previously had been chosen by state legislatures.

• At 792 feet, the Woolworth Building was opened on April 24, 1913 in New York City. When completed, it was the tallest building in the world.

• May 7, 1914 a resolution establishing Mother’s Day, to be observed on the second Sunday in May, was passed by Congress.

• May 7, 1915, the British steamship Lusitania was sunk without warning off Ireland by a German submarine. Killed were 1,198 of the 1,924 persons aboard, including 63 infants. The American loss totaled 114, later considered a contributing factor to the United States’ entry into World War I against Germany in 1917.

• President Wilson is reelected on Nov. 7, 1916 in a very close race over Republican Charles Evans Hughes.

• Jan. 24, 1916, the federal income tax was ruled constitutional by the U.S. Supreme Court in the case of Brushaber V. Union Pacific Railroad Co.

• June 15, 1916, the Boy Scouts of America was incorporated by a bill signed by President Wilson.

• April 6, 1917 the U.S. declared war on Germany; on May 18 The Selective Service Act was passed, authorizing the federal conscription of  armed forces; and on June 26, the first American troops arrived in France.

• Dec. 18, 1917 the Eighteenth Amendment to the U.S. Constitution outlawing the manufacture, sale or transportation of alcoholic liquors was passed by Congress. It was finally ratified by the states on Jan. 29, 1919.

• May 15, 1918, the first air mail service began with flights between New York City and Washington, D.C.

• The Treaty of Versailles was signed on June 28, 1919, officially ending World War I. In January, President Wilson began his dream of establishing a League of Nations.

• Oct. 28, 1919, the Volstead Act, or National Prohibition Act, was passed by Congress over Wilson’s veto the previous day. The act provided for the enforcement of the provisions of the Eighteenth Amendment.

Rub hinges with a feather dipped in oil and they will not squeak.

Clean the meat chopper by running dry bread or crackers through it.

To improve tough meat, rub it well with a cut lemon. This acid softens the fibers.

When a loaf of bread has become stale, dip it in water and place in a paper bag in a hot oven.

Keep the fingers covered with salt when cleaning a fowl, as it prevents the fingers from slipping.

When suffering from a nervous headache, try walking slowly backward for about ten minutes, placing first the ball of the foot on the floor and then the heel.

Often a tight shoe may be stretched by applying a cloth wrung out of boiling water.

To polish windows, dip a cloth in dry starch and rub over the glass, then polish with a dry cloth.

Tips from the Kitchen Cabinet:

If the sweet peas, cucumber vines and rose bushes are infested with the ubiquitous bugs and lice which destroy the plants, use the following spray: Melt a third of a bar of Ivory soap, add a teaspoonful of kerosene and eight quarts of water. Use this in the sprinkler and spray everything that needs it, as it is a universal killer.

The vogue for corsage flowers, both at home and abroad, is strong at present, and shows signs of becoming even more widespread, says the Drygoods Economist. Garnitures of this character are worn on evening and theater dresses and on afternoon gowns as well, and give an unusually smart touch to the toilette. High-grade millinery is also making use of these satin flowers.