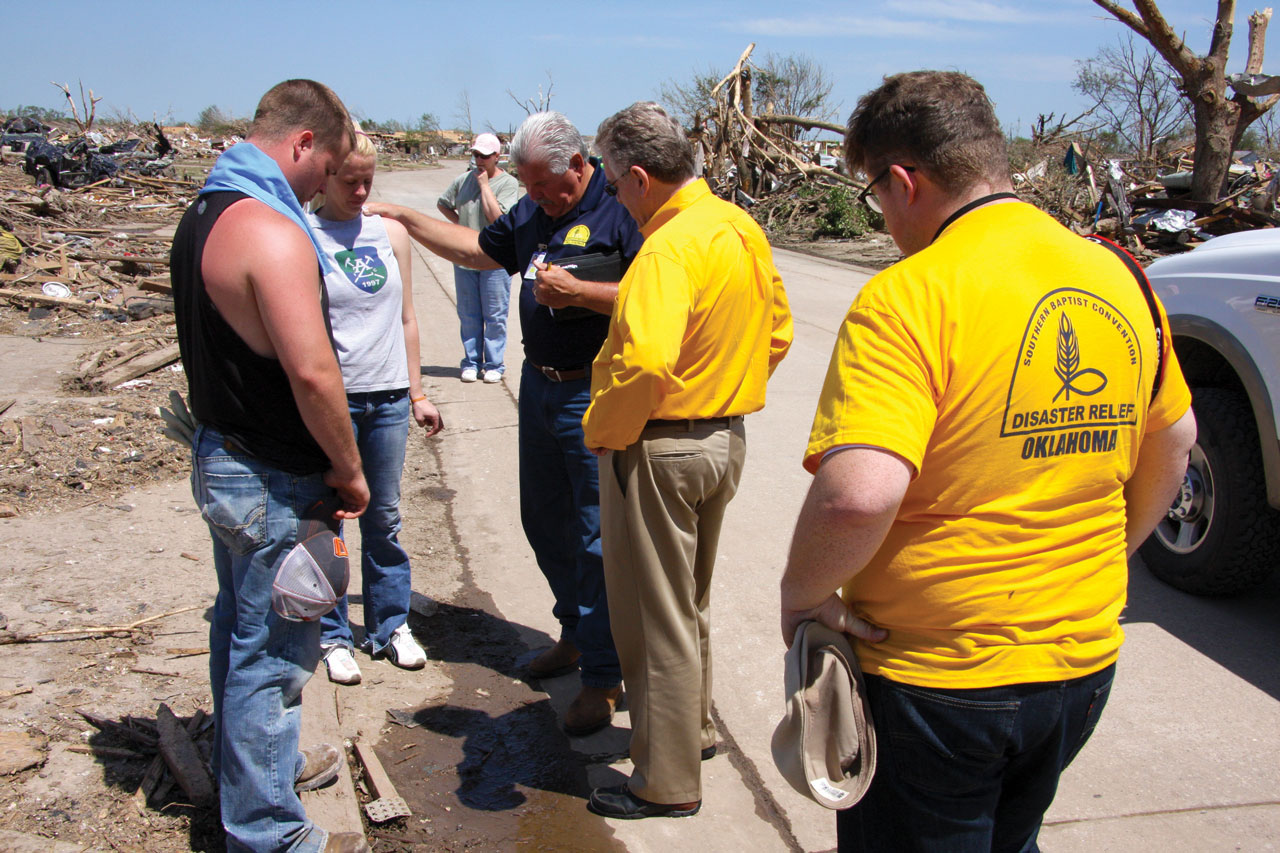 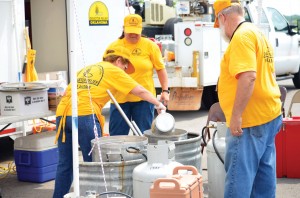 With a trained volunteer force of more than 5,500, Oklahoma Baptist disaster relief prepared more than 200,000 meals served to victims and volunteers in the wake of the May 2013 tornadoes (Photo: Bob Nigh)

The Baptist General Convention of Oklahoma’s (BGCO) Disaster Relief operation, which has trained more than 5,500 volunteers who have served in the wake of nearly every major disaster in its 40-year history, is still serving Oklahomans as the one-year anniversary of the May 2013 tornadoes nears.

The ministry, which relies on charitable donations to serve victims of disasters and does relief work of a wide variety—including clearing debris off tornado-wrecked residential properties and preparing thousands of meals for disaster victims and volunteers—has played a major role in the Moore and Shawnee-area tornado response and recovery. 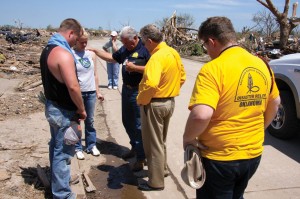 From left, two victims of the May 20, 2013 Moore tornado are prayed over by Baptist General Convention of Oklahoma (BGCO) Disaster Relief Director Sam Porter, BGCO Executive Director-Treasurer Anthony L. Jordan and another BGCO official. The BGCO cleared the home sites at no charge of more than 1,200 of the 4,035 houses that were reported destroyed or damaged by the tornado (Photo: Brian Hobbs)

“We were humbled to receive donations from thousands of individuals and many businesses, in addition to contributions from Oklahoma Baptists and other Southern Baptists from around the world, who gave to its disaster relief operation since last May,” said Anthony L. Jordan, executive director-treasurer for the BGCO.

According to Jordan, BGCO Disaster Relief received approximately $3.9 million in designated charitable contributions toward the 2013 Oklahoma tornado response, as well as more than $2.5 million in gifts toward its general disaster relief operation.

Since May 2013, the BGCO has made an impact through service and donations in these ways: 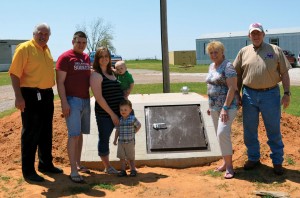 Cecilia Breedlove, second from right, and her grandchildren, Chris and Sarah Geddes and their sons, Zechariah and Christopher (Standing) are grateful for their new mobile home in Steelman Estates (In background at right) provided by the BGCO, represented by Porter, left, and Oil Patch Chaplaincy Consultant Tom Beddow, right. The BGCO also installed the new in-ground concrete storm shelter near their home. (Photo: Bob Nigh)

“Since the May tornadoes, the BGCO disaster relief volunteers and churches have served thousands of Oklahomans through our efforts,” said Sam Porter, disaster relief director for the BGCO.

Approximately $3 million already has been spent toward tornado relief. The BGCO is continuing to meet needs as they are identified, said Jordan.

“The BGCO was active, of course, in the immediate response, and we are actively involved in the long-term rebuilding process, as well,” said Porter. “There are major plans in the works to utilize the dollars toward this recovery and rebuilding, and we are committed to making sure every last person who was affected by these storms is served to the best of our ability.”

Jordan emphasized that while dollars are important, the entire well-being of the person is at the core of its vision.

“We recognize the grief and trauma of those affected by the storms is great, and we know each of these people will find true help from the Lord and our volunteers and ministry has that as its chief aim,” he said.

In addition to serving in Oklahoma since May 2013, including mud-out work in Poteau and Weleetka after flooding in those areas, Oklahoma Baptists were activated to serve after Colorado wildfires in June and floods in the Boulder, Colo. area in the fall of 2013. The BGCO also sent $50,000 to the Philippines for disaster relief after Hurricane Haiyan struck that island nation in early November.