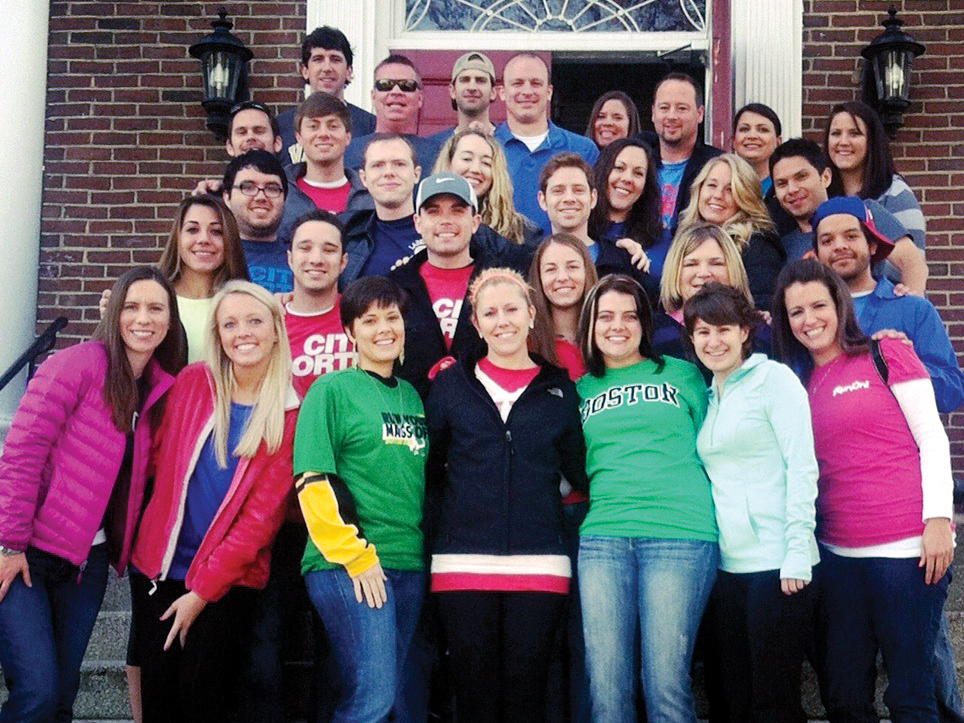 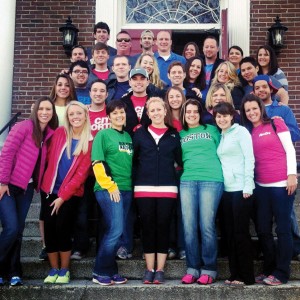 The team of young singles who participated in April 2013 mission trip to Boston pose together for a photo. The team stayed an extra day after the Boston Marathon bombing and ministered to the city’s grieving citizens.

BOSTON (BP)—Most years, when Plano, Texas, Prestonwood’s young singles take mission trips to Boston, they arrive a week before the Boston Marathon and leave the day after.

Last year was an exception. Since they could get cheaper flights two days after the event, the team decided to stay a day longer. When a bomb detonated near the finish line of the 2013 marathon killing three and injuring 264, that extra day may have been the most important day of the whole trip.

“We had an amazing opportunity to just love on a city and offer prayer and encouragement to a city that needs it,” mission volunteer Bryan Gibbs said of last year’s experience. “We went back into the city and affixed signs to our bag that said, ‘Need prayer? We’re available.’

“We did a lot of the same servant evangelism work we usually do, but we knew this was not a normal situation. We were able to pray for people outside of the hospital. A lot of our people were able to give granola bars or bottles of waters to first-responders— to just go out there and help the city. We were thankful we were able to stay up there that extra day and be there to provide what help we could in such a tragic time.”

Gibbs, who participated in this year’s Boston outreach and was on his 16th mission trip, has been helping church planters in Beantown since 2004. He and his team returned to Boston on April 17 for ministry as they prepared to serve the city and its visitors during this year’s Boston Marathon. The team participated in a variety of servant evangelism initiatives. Yet the primary purpose focused on finding opportunities to share the Gospel with Bostonians and visitors from around the world in the city to watch the race.

The story of how Prestonwood Church had ministry volunteers on the ground during this critical time last spring goes back more than a decade.

“That’s when our heart really started to beat for church planting when we developed a partnership with Hope and Curtis and started sending teams up there,” said Jarrett Stephens, a teaching pastor at Prestonwood. 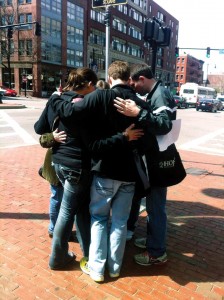 Members of the mission team prays with a Boston resident in the city. Prestonwood’s Young Singles ministry had been sending teams to help Boston church planters for more than a decade.

Prestonwood became more involved in church planting in 2011 through NAMB’s Send North America efforts to mobilize churches to 32 of the continent’s largest and most influential cities. Near that same time, senior pastor Jack Graham led the church to gather a network of likeminded churches “to resource and encourage pastors while working together to plant and revitalize churches.”

“What I want to see happen through the Prestonwood Network is to encourage pastors and church leaders to take the baton and go forward strongly and passionately with the Gospel of Christ in ways that will really change the world,” Graham, who has pastored the Dallas-area church since 1989, said. “My goal with the network is to pass on to this generation and to future generations some of the things that I’ve learned, and some of what God has taught me over the years in ministry. I’ve never been more excited to have the opportunity that we’ve been given here at Prestonwood.”

The network has blossomed in the past three years with plants in several large cities including Boston, New Orleans, Seattle and San Francisco and plans to plant soon in Denver, Indianapolis and Washington, D.C.

Stephens said, “We want to introduce established church pastors to planters who are getting it done.

“We want to encourage pastors who aren’t in the game to get in the game,” he said. “They can do exactly what we’re doing. They can send teams. They can start their own network and get them behind these guys.”

The network doesn’t just provide funding for church plants but also sends volunteer teams, like the one in Boston this year to serve at the marathon. These trips play an important part in discipling participating Prestonwood members—along with members of other partner churches—in what it means to be believers living on mission.

For example, when Gibbs first got involved in mission trips to Boston, he had recently re-committed his life to Christ and was intimidated by sharing his faith in the city’s tough intellectual climate. Today Gibbs not only believes he is better prepared to share his faith in Boston but also back home in Dallas.

“When people think about short-term mission teams, I always thought about going overseas from my own naive perspective,” Gibbs said. “Now I understand that there are places like Boston that very much need the love and hope of Jesus Christ as much as any other place. Literally, Boston used to be a beacon for Christianity—a City on a Hill — but that’s kind of waned over the years.”

Metro Boston has only one Southern Baptist church for every 42,919 people. For more information about helping plant churches in the city, visit namb.net/boston. To learn more about the Prestonwood Network, visit prestonwoodnetwork.org.