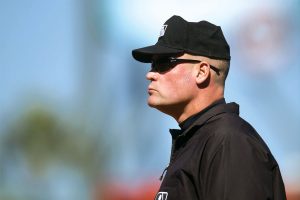 BOSTON (BP)—Ted Barrett had made a deal with God, or so he thought, when he was a young umpire in the minor leagues.

He wondered for a while if God was calling him into ministry. He promised God that if baseball didn’t work out, and that if he never got a job in the big leagues, then he’d pursue that calling.

Barrett did more than just get a job in the big leagues. As the umpire crew chief for the recent World Series between the Boston Red Sox and the Los Angeles Dodgers, he has reached the pinnacle of his profession.

“This is the top,” Barrett said. “It’s the ultimate honor. I remember when I set out to go to umpire school 30 years ago, and we would talk about one day maybe one of us would get to be crew chief for the World Series, and here it is.

And yet, even with the success Barrett has seen in the big leagues, God didn’t leave him alone about that whole ministry thing. He got the Major League job and assumed that meant baseball was where God wanted him. But Barrett couldn’t shake the feeling that God was calling him to ministry, and he battled that conflict for a while. Barrett thought it was a dirty trick.

Only then, after Barrett ultimately surrendered to God’s calling, did the Lord reveal to him what has become the focus of Barrett’s life for the past several years—that God wanted him in ministry right where he was as a Major League umpire.

So that’s what Barrett has pursued. He’s been in the big leagues full-time since 1999, and he finished working his fourth World Series.

Barrett is the only umpire in Major League history to be behind the plate for two perfect games—David Cone in 1999 and Matt Cain in 2012.
But it’s his role as a minister to other umpires that gets Barrett especially excited.

“It’s been amazing,” Barrett said. “The transformation of guys who God’s brought out of addictions. He’s broken chains. He’s restored marriages. He’s restored relationships with their children. I’ve seen prodigal children get prayed for and come back. I’ve seen miracles happen in people with cancer. We’ve laid hands on them, and God’s healed them.”

Barrett and another umpire, Rob Drake, began the ministry Calling for Christ, which exists to reach, teach, make disciples of Christ and win souls for the Kingdom of God. The organization’s main outreach is an annual retreat for umpires in the offseason that is a time for them to worship together and hear from different speakers.

At the first retreat in 2003 at the Falls Creek Baptist Conference Center, 12 umpires attended. It’s grown since then, to 60 umpires from the big leagues and the minors at last year’s event.

In addition to the annual retreat, Barrett participates in a weekly prayer phone call, typically with 20 or 30 umpires participating in the conference call.

“We’ll take turns, and someone will bring a brief devotional,” Barrett said. “Then we pray for the specific needs of the group. Guys who don’t get involved at all with anything else that we do will get on that prayer call.”

Barrett and other umpires have participated in mission trips to Cuba and Germany. They do weekly Bible studies at Cracker Barrel during spring training, and this year the umpires began using Zoom video conference calls to meet for their own chapel service on Sundays.

“As Major League umpires, we’ve always had influence over the minor league guys,” Barrett said. “I feel like we’ve taken the influence we have and turned it into trying to show these guys what it’s like to have a relationship with Jesus. The big league guys have modeled that very well.”

Barrett knows he’s nearing the end of his career. And as he completed working his fourth World Series, he knows that it may have been his last one. His goal, as crew chief, is to encourage excellence in his fellow umpires and let the players and the game be the story.

“If we can do our job and not get noticed, that’s great,” he said. “But at the same token, we want to glorify our Creator too. We want Jesus to be front and center. I think by doing our job excellently, we can do that.”