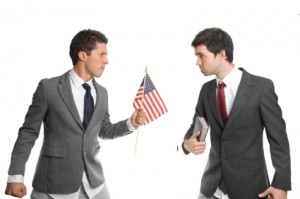 I liken the forthcoming general election  to the World Cup; even if you don’t want to embrace it or like it, you have to care about it  because it is everywhere. In Stillwater the streets are lined with signs endorsing a bevy of candidates who are seeking to lead us back to the American promised land. If you turn on the television you get bombarded with an array of commercials. (On a side note, I wonder how much good could done with all the money spent on campaigns? Maybe someone could pass a law saying whatever is spent on a campaign must also be applied to paying off the deficit.)  Many people try to ignore the whole spectacle and they express their apathy or disdain for the political process by not voting. Some say that we should vote because it is a privilege of freedom that has come as a result of the price of brave men and women who died to give us the opportunity to be represented. Currently, there seems to be a trend among Christians, especially among young adults, that politics and faith should have little or nothing to do with each other. Ed Stetzer has tweeted on Twitter, “When you mix politics and religion you get politics.”  So what about Bible and politics? Does the Bible have anything to say about voting and what our involvement should be when local and national elections force their way into our cities, living rooms and minds?

It seems to me that the Bible does give us a framework by which we can think about politics and make decisions on how to vote in a way that both honors God and is loving toward others (even when we are voting for “the lesser of two evils”). God and the human authors don’t dismiss politics and government in the Bible as unimportant, because all of life is important. God is not apathetic. The Bible shows that right thinking about God through Jesus leads to right thinking about all of life.

Here are eight convictions that I try to act on as it relates to the Bible and voting. I am willing to critique and change a lot of what I have written below, but the one thing that I am not willing to do is to be brain dead and apathetic about my responsibility as a disciple of Christ when it comes to any part of life, including politics and voting.

The fatal habit of considering Christian morals as distinct from Christian doctrines insensibly gained strength. Thus the peculiar doctrines of Christianity went more and more out of sight, and as might naturally have been expected, the moral system itself also began to wither and decay, being robbed of that which should have supplied it with life and nutriment.

Wilberforce was right to think that a person’s righteous behavior is the outflow of a changed heart and right thinking. We can tell people they ought not to kill babies or steal from the poor, but until they know why and are changed from the inside-out, morals will only wither and decay. Lasting morality is the result of a new creation (2 Cor. 5:17), and unless God changes the hearts and minds of people we are only delaying the inevitable reality of eternal separation from God.

But let us not think that the fight for justice and morality is wrong or unwarranted. We certainly would not write off the efforts of a man like Wilberforce as stupid or pointless. After all, Wilberforce gave his life to the abolition of the slave trade in Great Britain from 1787 to 1833. He was defeated in this attempt eleven times and only gained the decisive victory three days before he died in 1833. But he is right, low morality comes not from lack of laws but from not having the heart changed by the power of the gospel.

So vote. Exercise rights and privileges that so many in this world long for in the ability to vote, but may our priority be to put your hope in God through Jesus. He is the one that brings lasting change and justice to every person who believes.