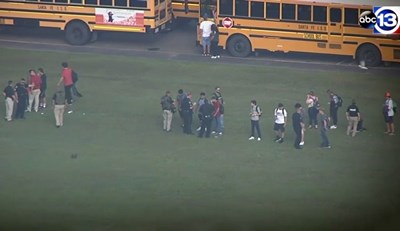 SANTA FE, Texas (BP) — Grief counseling, prayer and offers to assist with funeral arrangements are among the ways local Southern Baptists sprang to action after a gunman killed 10 people at a Houston-area high school today (May 18).

Nine students and one adult are among the dead at Santa Fe High School just south of Houston, according to media reports. At least 10 additional people at the school were wounded in the shooting, which occurred around 7:30 a.m.

A 17-year-old suspect is in custody, as is a second person of interest, though the person of interest may not be a suspect, according to media reports. Explosives were found at the school and off campus, and two weapons reportedly were used in the shooting.

“I’m not sure which is harder to take, this or [Hurricane] Harvey,” said Lee Balinas, pastor of First Baptist Church in Hitchcock, Texas, three miles away from the school. Damage from Harvey in August 2017 “was widespread. But this one, because of the suddenness and the shock and 10 young lives snuffed out — it’s different.

“You can replace stuff … but these are lives and potential for the future that will be lost forever,” Balinas told Baptist Press.

Members of First Baptist Hitchcock have children who attend Santa Fe High, but all of them seem to be safe physically, Balinas said. He knows a female substitute teacher who is not a member of First Baptist and was shot in the leg.

First Baptist Hitchcock has offered the use of its facility free of charge for funerals of shooting victims. Balinas is coordinating with other local pastors and the Southern Baptists of Texas Convention (SBTC) to organize a community prayer vigil.

SBTC Executive Director Jim Richards tweeted, “Please pray for the people affected by the shooting at Santa Fe High School in Texas. @_SBTC will seek to assist the pastors and churches as they minister.”

SBTC disaster relief chaplains are on alert to respond in Santa Fe if needed.

First Baptist Church of Alta Loma in Santa Fe will hold a prayer service tonight at 7 p.m. and is making chaplains available to those wishing to talk or pray, according to a news release from the Baptist General Convention of Texas (BGCT), another state convention in Texas that partners with the Southern Baptist Convention. Some students from First Baptist Alta Loma attend the school, but none have been reported among the dead or wounded.

Sagemont Church, about 10 miles away in Houston, has offered its facility for any funerals that will require a larger auditorium. Sagemont also has offered to donate graves in the church’s section of local Forest Lawn Cemetery for shooting victims.

“We want to reach out to the community and reflect the love of God to those that are hurting,” Sagemont pastor John Morgan told BP. “When one of us hurts, we all hurt. We’re going to have a special time of prayer on Sunday morning in all of our services.”

The BGCT said its representative for the Houston area has been providing convention resources to local churches and the area’s Galveston Baptist Association in the shooting’s aftermath. The BGCT’s chaplaincy relations ministry is preparing to respond to a request for help in Santa Fe. An administrator and chaplain from First Baptist Church in Friendswood, Texas, some 17 miles away, was at Santa Fe High today ministering to families, the BGCT said.

BGCT Executive Director David Hardage said in a statement, “Today’s shooting in Santa Fe is heartbreaking. Violence at school, the home and the workplace is a direct contradiction to God’s Word and way. We are earnestly praying for all those affected. Violence and abuse of any kind, particularly against women and children, is far too commonplace in our society. Texas Baptists will continue its efforts to ensure the respectful treatment of everyone.”