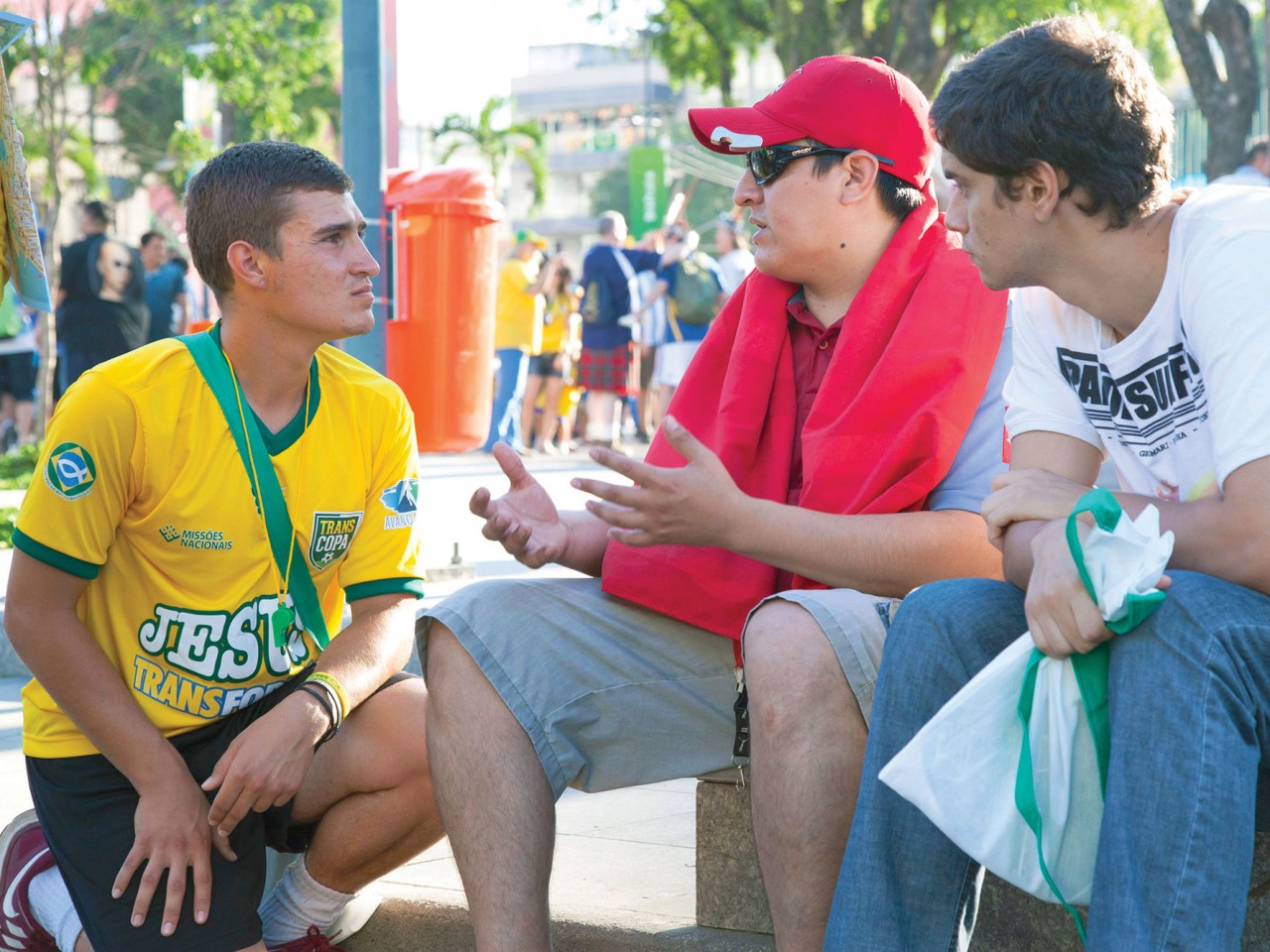 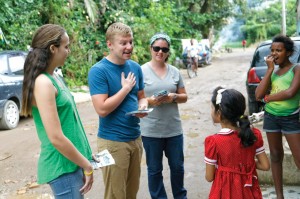 Dane Van Ryckeghem, center, and some teammates share the Gospel with Brazilians in a community on the outskirts of Rio de Janeiro.

RIO DE JANEIRO (BP)—There were no flashbulbs or television cameras, only teammates—mostly children half his size and barefoot—who celebrated and mobbed Dane Van Ryckeghem after he assisted in a goal during the game. The frenzy of World Cup soccer had nothing on the jubilant Brazilian neighborhood kids playing with visitors from the United States on a soggy field on the outskirts of Rio de Janeiro.

Van Ryckeghem, a student at the University of Alabama, traveled to Brazil with a team of 12 other student volunteers with a mission of sharing the love of Christ against the backdrop of the largest sporting event in the world—the 2014 FIFA World Cup.

“I really wanted to spend my summer doing more than just working at a job and then going back to school,” Van Ryckeghem said. “I wanted to do something that made a difference, and I wanted to see the world.”

After hearing about a World Cup-focused trip—one endorsed by the International Mission Board (IMB)—for students during a missions conference, he knew immediately he was going to Brazil.

“I absolutely love soccer and love the idea of spending part of my summer in this setting,” he said. “This is a dream come true to be here.” 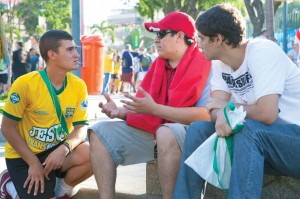 James Dubuisson, a junior at the University of North Alabama in Florence, took the first airplane ride of his life to travel to Brazil with the group. As a youth minister at Lawrenceburg, Tenn., First, he said a big part of his decision to come to Brazil was to serve as an example and encouragement to his youth group.

“I’ve been talking to my youth about being different and showing people are different,” he said. “So often, we go to church, but don’t act differently. I feel like this  is me living that out—showing the kids ‘this is how to live out the difference of what Christ has done in your life.’”

After Dubuisson and the rest of the team arrived in Rio de Janeiro, they spent their first days ministering in an impoverished community. They served alongside members of a Brazilian Baptist church by playing with children, helping with a medical clinic and walking through the neighborhoods sharing the Gospel with the help of translators.

“We’re here for the World Cup, but more importantly we’re here to share the love of Jesus with anyone and everyone we can,” Lee Dymond, campus minister at Auburn University at Montgomery (Ala.) and leader of the volunteer team, said. 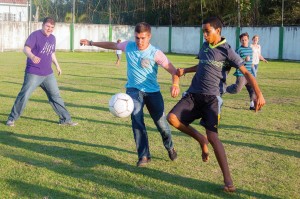 Smirniotopoulos and some teammates enjoy a friendly game with Brazilian children.

Jordan O’Donnell, a student volunteer from Virginia Tech University, confessed feeling apprehensive at first about sharing the Gospel in neighborhoods. But the nervousness quickly diminished, he said.

“It’s challenging to share through an interpreter, but it got smoother as we went along,” O’Donnell said. “It’s interesting because sharing about Jesus in America usually gets a negative reaction. But here, walking through the community, everyone responded that they wanted to hear about Jesus—even a couple who had never even heard about Jesus before.

The team of students will continue to share the Gospel during their two-week stay in Rio. During some of their outreach, they are partnering with the Brazilian Baptist Home Mission Board in a soccer-themed evangelism strategy to share with fans arriving at Brazil’s national stadium for World Cup matches.

“The World Cup is where the nations come to one place,” Dymond said. “It’s our opportunity to share the Gospel and hopefully impact not just Brazil but all the nations that are coming to Brazil for World Cup.” 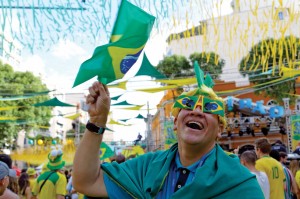 For his team, Dymond said he hopes as the students share the Gospel and see people accept Christ, they will be emboldened with the knowledge that “if they can do it here during the World Cup, it will encourage them to (continue) when they go back home.”

For ongoing coverage of the World Cup outreach, see the story package, “The Cross at the Cup,” at commissionsto
ries.com/americas. To learn about global missions opportunities for students through the IMB, go to imbstudents.org.