Spencer Tillman talks on impacting others 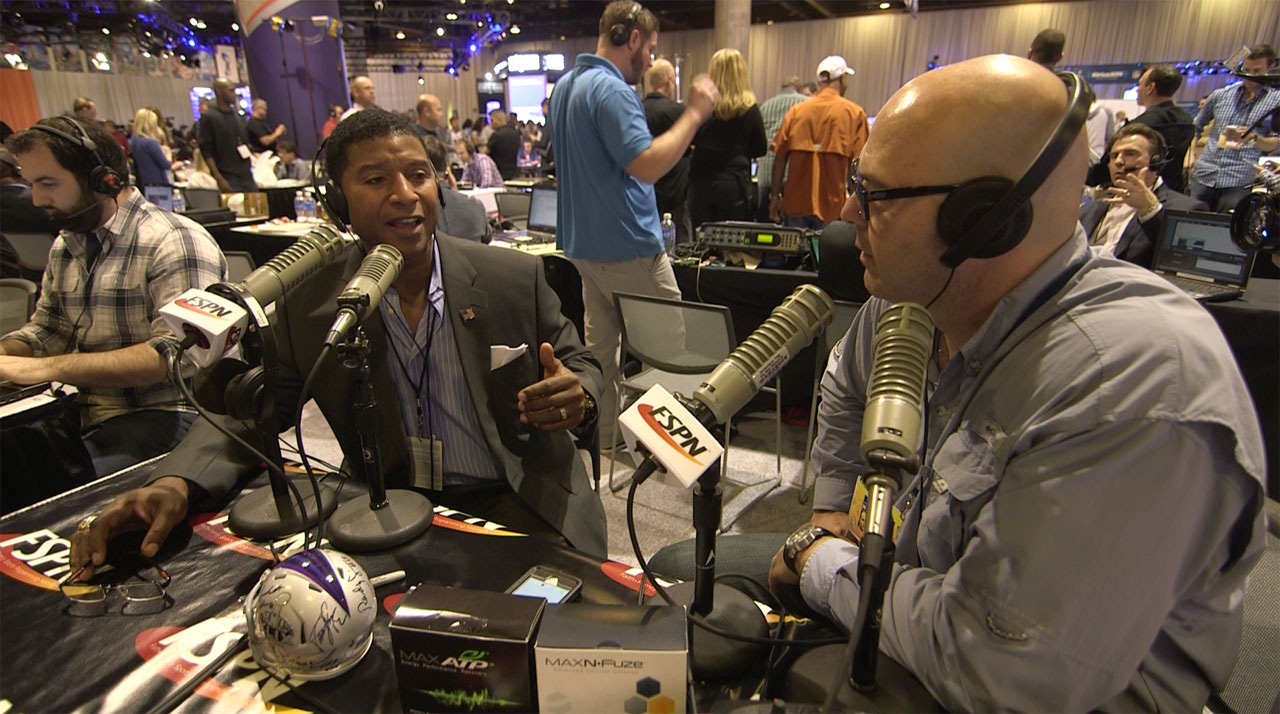 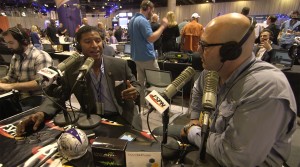 Roman Gabriel III, right, interviews Spencer Tillman during media days for Super Bowl XLIX. Tillman played for the University of Oklahoma before being drafted by the Houston Oilers. He was on the Super Bowl XXIV Championship team when he played with Joe Montana for the San Francisco 49ers. and completed his football career with the Houston OIlers. He currently has a radio show in Houston, Texas, and was a CBS sports analyst (Photo: Biblical Recorder)

As an All-American running back for the University of Oklahoma, Spencer Tillman was the captain of the National Championship team in 1985. After that, he was drafted in the fifth round of the 1987 NFL draft by the Houston Oilers.

Two seasons later he was traded to the San Francisco 49ers where he became co-captain with Joe Montana and Ronnie Lott as part of the Super Bowl XXIV championship team. He went back to play for the Oilers in 1992, where he stayed for two more seasons, completing his football career.

I caught up with Tillman at Super Bowl XLIX in Phoenix, we talked about his commitment to walking closely with God and making a difference in the lives of others.

You are committed to your faith. Who has had an influence on your Christian walk ?

I’m the son of a missionary. My mom did work all over the world. As a kid she would quote scripture, and there’s one passage I remember, “As the sun and the rain come down from heaven the water recedes and causes it to bring forth after its own kind, So shall my word not return void until it achieves the purpose for which it was sent” (Isa. 55:10-11). But she wouldn’t leave it there; she would explain it to me. She’d say, “Spencer, do you understand that?” I’d say, “No ma’am.”

“Well God has so arranged the affairs of nature, so that you take a seed … and you put it in the ground and you water it, the sun kisses it.

“The seed really has no choice in the equation. It must do what God designed it to do. ‘So shall then my word be.’ The word cannot return void until it achieves the purpose by which is been sent.

“So shall I send you – and all the things you’ve been set up to do with my gifts and talents – as long as you confess what God says about that situation. Do your part, leave the outcome to Him and leave it alone from there. And move on. You are exercising faith when you do this.” 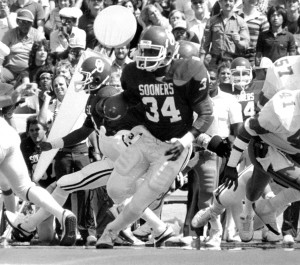 Tillman was an All-American running back at OU from 1982-86 and was captain of the 1985 National Championship team. (Photo: University of Oklahoma Athletic Communications)

What do faith, family, and football mean to you?

“Faith, family, and football” is kind of my mantra. I wrote a book with Thomas Nelson Publishers called Scoring in the Red Zone: Leading successfully when the pressure is on.

The theme of it was, first, find out what a red zone is—more importantly, understanding what is necessary to thrive in the red zone.

Life is nothing but a metaphor, and sports is a metaphor for life. Who would approach a game without having a game plan, without having a way to deal with mitigated risk and pressure? John told Gaius, “I wish above all things that you would prosper and be in good health, even as your soul prospers” (3 John 2).

The bottom line is you don’t do that devoid of some sort of system of approach, adhering to the word of God, admonishing yourself and others around you as to what is right and what is wrong.

As Christians we are called to use our influence and platform to make a difference where we work. How are you able to minister effectively in the media environment, on national television?

That’s a great question. You know here’s what I would say: Know that God has created this thing called time, as a module for man to dwell in, and God stands out in time-eternity. And He sees our travails and our triumphs pressed into this eternal now.

What that does for me is it gives me some sense of how to look at problems. And in our business there are always problems, and those problems bring about opportunities to minister.

So by giving me a platform to be at CBS as long as I have … I get a chance to say, “Hey, here’s a solution to that problem. Let me show you how God would have me handle it.”

And how you would handle it, of course, is your life and your responsibility. That’s how I do it; I look for opportunities.

People gravitate to you if they see you as a person who came in during the difficulties. There’s no shortage of opportunities to minister.

Why is taking advantage of the platform God has blessed us with so critical?

It’s straight forward to leverage the platform wherever God places me. The bigger that platform and the bigger that challenge may be, I know He’s able to equip me.

The Bible says that He will perfect those things, and He will watch over his Word and see things through. I will leave it to Him to do that. But if you put me there, I will make something of it. I need to stay in His perfect will for my life and get done what He has called me to do.

Roman Gabriel III is a columnist for the Biblical Recorder.