Shroder pitches and preaches while at OBU

SHAWNEE—It can be easy, at times, to get discouraged with the state of major collegiate sports. So much of what is seen about the inner workings of sports programs can be seen as negative. Academic or moral scandals can cause many to become cynical.

Thomas Shroder’s story is a great alternative and makes it easy to root for Oklahoma Baptist University (OBU). One thing is clear for the junior pitcher: baseball is not his main priority. Rather, it is his relationship with Jesus Christ and the ministry opportunities the Lord has given him since he accepted the call to ministry and came to OBU. 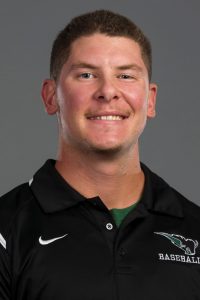 Shroder is majoring in pastoral ministries and apologetics.

Growing up in California, Shroder took to competitive sports easily, but he said baseball has always been his main interest in life. In fact, he loved it so much that it became a problem.

“Baseball was all I wanted to do,” Shroder said. “So much of my identity, growing up, got wrapped up in that.”

The son of a youth minister and a worship leader, Shroder was no stranger to the Christian life. Rather than strengthening his own faith, however, this dynamic almost seemed to push Shroder away.

“I just sort of adopted their faith,” he said, “and that made itself very clear when I got to high school and junior college. Church was just something I did on Sundays, and I ran to the world.”

When the time came to pick a college, Shroder decided to play two years of baseball at a junior college in Arizona, and then he transferred to the University of Texas at Arlington (UTA). His major, at that time, was economics, but it was more out of indecision over what he wanted to do with his life after school than passion.

During his time at UTA, Shroder suffered an injury. He was unable to pitch at full capacity and eventually redshirted. This led to a time of depression for Shroder—who was he without baseball?

“I felt God was saying, ‘If I took away baseball from you, you’d have nothing,’” Shroder said. “It was my whole identity, and I knew it was going to let me down.”

Shroder felt it was an invitation to a deeper relationship with the Lord, and during this time Shroder began to grow closer to Him. Now, he’s thankful for that redshirt year.

“It turned out to be a blessing in disguise,” Shroder said. “I have another year of baseball now, which gives me the extra year of school that I needed after switching majors.”

The story of why Shroder switched majors is a long one, but he said that it started, ironically enough, as a joke. During lunch after church with one of his friends at UTA, Shroder brought up what life would look like after college. What were they going to do if baseball didn’t work out? The conversation occurred Shroder said, at a time when God had been working on his life. So, jokingly, he blurted out, “Oh well, I’ll just go be a pastor.”

In the months following that lunch conversation, Shroder’s joke turned into a reality. Through a number of conversations with spiritual mentors, God began to turn that offhand comment into an intense, serious calling. There was no doubt, now, that Shroder knew what God had for him: ministry, in some capacity.

“But at that point,” Shroder said, “I had no way to pursue that calling. I was still at UTA. I was still studying economics. I just sort of thought, ‘Okay, great, but maybe after school.”

God, though, had other plans. After a series of unfortunate events at UTA, Shroder was approached by OBU—a team that had recruited him out of junior college and one that he had considered very strongly. In the end, the door opened for him to play his final two seasons as a Bison and to change his major to pastoral ministries and apologetics. He didn’t hesitate.

Now as an OBU student, Shroder spends his time as a supply preacher—someone who isn’t officially a pastor, but who can preach and minister to congregations. Shroder is one of several names on a list for supply preacher duty in OBU’s pastoral department, and he’s been called on to preach once before, in Macomb. He divides his time between classes, baseball and his ministry, which currently takes the form of a youth pastor position at Sparks, First. “I’m really looking more to serve,” he says, “rather than just being an attender.”

Juggling baseball and faith can be a challenge, especially navigating the dichotomy between competitive fire and Christian faith. “It’s not easy,” Shroder said. “I spend all of my time with the Lord trying to cultivate that mercy and grace, being rooted in that, but when it comes to being on the mound, there’s a tenacity there, an intensity.”

Shroder has struggled at times with reconciling those two things, and has tried to turn an arrogance and confidence in himself into a confidence in the talent and position that the Lord has given him. “Ultimately, it’s about how you carry yourself, win or lose.”

Shroder’s path is uncertain at this point—but comfort comes from being open to whatever God has for him. “Right now, I’m just looking to serve,” he said. Shroder desires to stay active in ministry and dedicate himself to the Lord, whether that be in full-time ministry or not.

One project that he’s working on is a blog titled “Godly Digest,” where he and a friend from UTA—the very friend, who Shroder first joked that he would go into ministry—seek to chronicle their faith journey. Someday, Shroder hopes that the blog could be turned into a book and used to encourage others in their faith.

“I don’t know where I’ll go, but my job right now is just to be faithful,” he said.

Shroder wants his journey to encourage others who may identify with it, who may not have it all figured out yet. “My encouragement to anyone reading this is just, don’t wait,” he said. “I will tell about the pitfalls that I had to go through to get to this point, but I encourage people to not get there before they come to the Lord. The God of the universe is calling you to an authentic relationship.”

Those are the two main themes to a conversation with Thomas Shroder: service, and a passionate pursuit of the Lord. It’s that pursuit that will bring him success in life, no matter what his sports career on Bison Hill and beyond has in store for him.