Greeting from Budapest! I am grateful to those of you who are following and praying for us. The work has not been easy, but it has not been in vain. I have often been told that Hungarian is the second-most difficult language in the world. I would have to disagree; I think it is the most difficult. Our interpreter this summer is a woman whose name is four letters long, but three of them are not found in the English alphabet. So she made up a name for herself that sounds like a Spanish name. 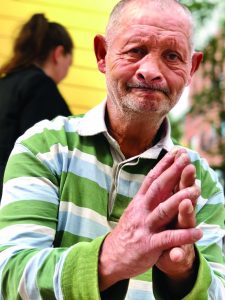 But there is no such thing as an easy foreign language. I know students who took five years of Spanish in high school, and all they can say is, “How are you?” and “Where is the bathroom?”

When I am in a foreign country, I start making a list of words that sound like English words. Let me give you an example. In Hungarian, the word for good is “jo,” but it sounds like “yo.” So I just “yo” everything. A pastor will take me around his church, pointing things out. I walk behind him, and every time he points to something, I just say “yo” and nod my head. I don’t have a clue what he is saying, but the people seem to like it when I yo and nod.

When I am eating with the Hungarians, they always want to know if I like their cuisine. I will use three yos. I make the good-food growl and in a deep voice, say, “Yo, yo, YO!” I do three yos because two together remind me of a round toy with a string.

Over the next few days, I will be working in Romanian, Chinese, Hungarian, English and one other very important language: the language of love. In fact, none of these other languages matter if you don’t have the language of love. Jesus said the world will know we are His children by our love for one another, and when people see that love being demonstrated among us, they will want to join our group.

Please don’t get me wrong. We should know the doctrines of the Bible and be able to give a reasonable defense for our faith. But the bottom line of what Jesus was teaching is not how we teach others but how we treat each other (thanks, Wade Burleson). The message of Jesus is not only to love your neighbor as yourself but to love your enemies too. When someone does you wrong, immediately pray for them and love them back. This type of love astounds the world.

I was walking down a sidewalk and saw an elderly man on his knees. He had a hat laid out in front of him and was praying to God for money. A Jesus kind of love doesn’t walk past these unfortunate people but stops and loves on them. A group of young Hungarian students saw us and came up and gave the man a pizza. So I asked if I could give them something too. They were eager to see what we had. Our students performed the Gospel for this homeless man and four teenagers, but only a few minutes passed before a whole crowd had gathered to hear about Him.

God’s love transcended all the different cultural, social, language and economic barriers, and the man put his hands together and lifted his eyes to heaven to receive the greatest love of all. I did give him some money, but that was nothing compared to what God gave him.

You see my friends, it is very simple. It is not how you teach but how you treat one another. Love one another? Yo, yo, YO!