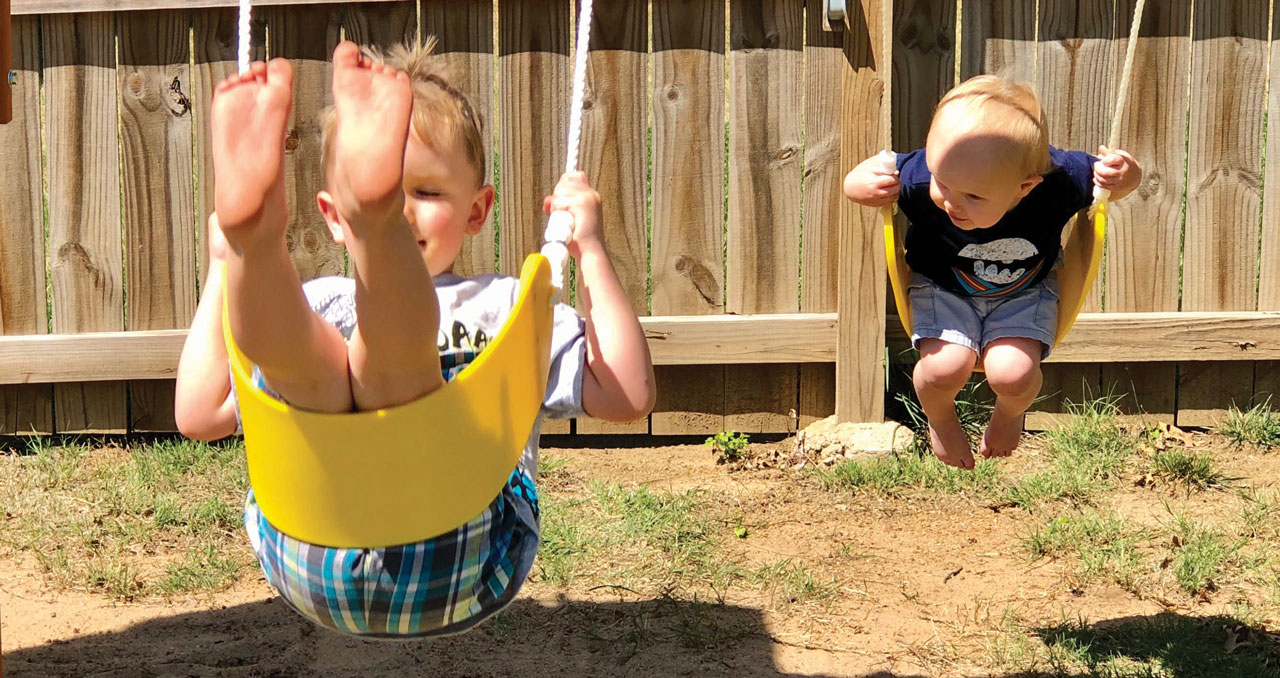 Grammy has been talking to me about putting up a swing set in our backyard.  She believes Titus the Honorable and Cohen the Goodhearted are at the age where a swing set will be a good babysitter—I mean investment.

Night after night, she showed me sales and pictures of different types of swing sets: wooden ones bigger than our house and small metal ones like the one I used to swing on as a boy. She happened upon one she thought would work for three reasons: 1) Poppy could put it together, 2) It came with free shipping and 3) Poppy could put it together. So she ordered it; actually, she ordered me to order it.

The day the swing set arrived, my son and I took my truck out to pick it up. In my mind, the box had to be huge. The swing set has a fort with a canopy, two swings, a climbing wall and a slide. But they brought out a slender box. “Where’s the rest of it?” I asked the clerk.

I’m not an argumentative person, but I had to ask. “There’s a swing set in that box?”

“With a slide, a fort and a climbing wall?”

I couldn’t believe what he said. When I got home, I inspected the contents of the box first thing and was amazed. I have never seen anything like it. If you could stuff a swing set into a trash compactor, you would end up with what I saw. Screws, bolts, blocks of wood, slide and instructions were there, all crammed together.

Since it was evening, and we didn’t have enough time to put everything together, Grammy helped me unpack and organize all the parts. I heard somewhere that if you left them all out overnight, the swing set fairy would come and magically assemble them.

The next morning, I woke up and rushed to the window, only to see every part still strewn across the patio. So much for my belief in the swing set fairy.

A cup of coffee in hand, I opened the directions, I don’t know if my bifocals weren’t working that day or if the actual pictures and print were fuzzy. But I figured out if I crossed my eyes halfway, everything came into focus.

Calling these instructions a “how-to manual” would be a stretch. I would prefer to call it a “guesstimating” manual: I guess this board kind of looks like the board in the picture, and I guess this thingamajig will fit this hole. After 10 hours of guesstimating and “unguesstimating,” a beautiful swing set stood in our backyard.

Titus the Honorable and Cohen the Goodhearted knew about our project and who it was for. As the task continued, we kept messaging them photos of the progress and even one of me on one of the brand-new swings.

They begged their parents to bring them to our house, so they could see the new addition to our backyard. At one point, Titus even asked for the phone to call Grammy. “She’ll come and pick me up,” he told his mom and dad.

The time finally came, and we heard the car door open. As fast as four little feet could take them from the front door through the living room and out the back door, those little boys ran.

Squealing with delight, they climbed over every inch of it. It was getting dark and time for them to go home. But the boys weren’t ready to leave. “Please let us stay!” they cried, but they have mean parents, who forced them back into the car and took them home to bed.

As I watched the swing set unfold in our backyard, God spoke to me about what He said in John 14:2-3: “My Father’s house has many rooms; if that were not so, would I have told you that I am going there to prepare a place for you?  And if I go and prepare a place for you, I will come back and take you to be with me that you also may be where I am.”

When I think about Jesus going to build a place for me, and that He wants me to come and be with Him there, I get as excited as those two little boys were while they waited for their swing set.

I am glad that when these words were recorded, they weren’t put into a fuzzy-looking “guesstimation” book but one that has stood the test of time.

It tells us specifically how to get to the place He has prepared: “… and whoever believes in Him shall not perish but have eternal life” (John 3:16b).