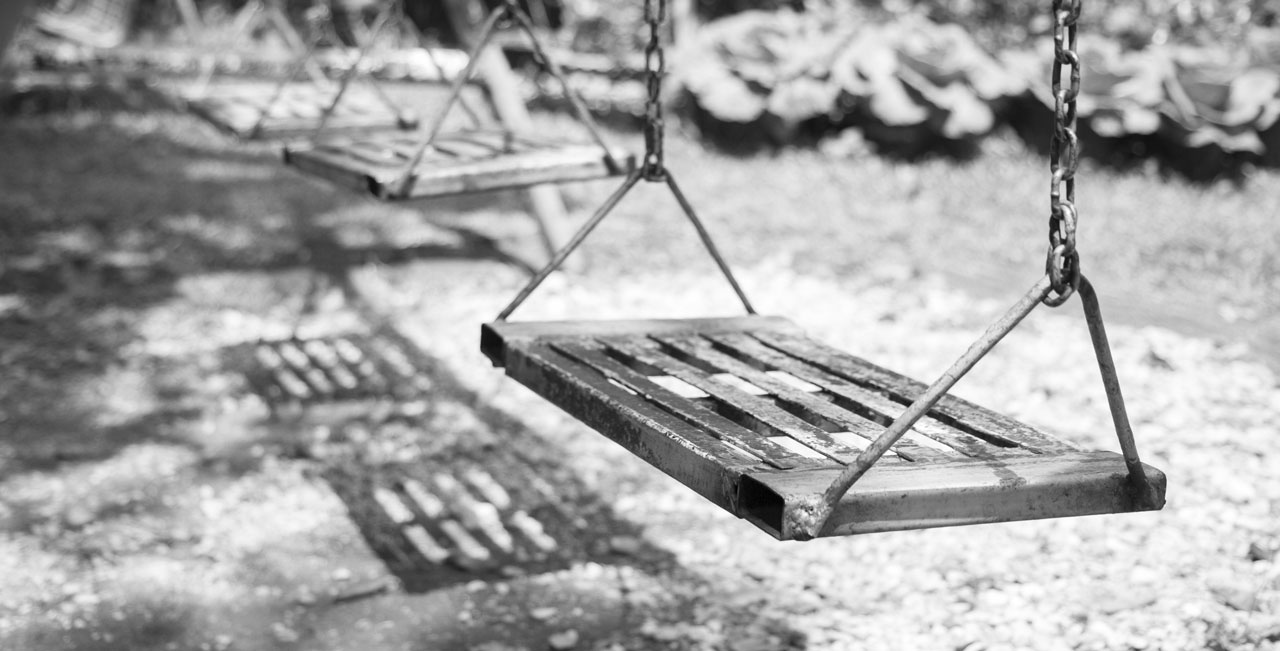 The other day, my wife and I were walking into a toy store when she commented that Titus the Honorable and Cohen the Goodhearted are about the right age for a swing set. At the sound of those two words, “swing set,” my mind took me to a fond place in the distant past. How much fun I had on a swing set as a child!

Now, that old swing set wouldn’t come close meeting today’s safety standards.  As I describe it, some of you will say, “Oh, my!” while the rest will say, “I had a swing set just like that.” The first thing I remember is that the legs weren’t anchored. As you swung back and forth, they would rise one at time and then drop back down, as if the swing set were prancing on the lawn. If you could get the timing just right, it would gallop like a wild stallion.

But to my brothers and me, swinging was secondary to the set’s main purpose as a well-crafted child-launcher. We would have a contest to see which one of us could go the highest and farthest. You had to be a master of physics to know the appropriate time to let go so you could sail through the air. Any miscalculation and … let’s just say it would end painfully. The object was to land as far away from the swing set as possible and remain upright on your own two feet.

If you’re like me, maybe you remember some of the other pieces of equipment from the playgrounds of your youth. First was the slide that wouldn’t slide. You would go an inch, screech to a stop, and then you would have to screech and scoot the rest of the way down. I knew how to fix that. All we needed was a can of WD-40 ad a pair of gunny sacks, and the slide would turn into yet another child-launcher.

And the merry-go-round? I won’t even begin to tell you what my brothers and I did on that instrument of torture, but our goal was to avoid having it become a child-launcher, too.

What about the teeter-totter? It wasn’t just for teetering or tottering; it could be repurposed as a tightrope. We would balance ourselves with arms out, walking to the other end and feeling like one of the Flying Wallendas. The teeter-totter could also be used to play paddle ball, where I was the paddler and the lighter brother on the other end was the ball. I loved to see how many times I could bounce him.

As I write this, I have help from a beautiful, talented 10-year-old writer, Emiley Watkins from Kingfisher. She reminded me of the other dangerous piece of playground equipment: the monkey bars. Emiley should know. She broke her arm on the monkey bars at school and sprained her ankle going down a slide.

Yes, the playground has risks. But back in the day, the joy in our play was to take something simple and transform it into something better. And better meant more joy!

Did you know God also finds delight in helping you find His joy? People often think of Him as a cosmic killjoy whose purpose in sending His only Son was to make you more religious. But that is as far from the reality and the truth of God as you can get. God is not into religion, but a relationship. That’s why He sent Jesus: to set you free. In the exchange of your life for His, He will give you a new way of thinking.

The older we get, the harder it is us for us to change our way of thinking. But with Jesus, our disappointments become His divine appointments, earthly problems are exchanged for divine solutions and tragedies are traded for triumph. Old things become new.

You can view the Bible, God and His Son Jesus in one of two ways. Those who haven’t begun a relationship with Jesus see these as a prison wall—to contain and to oppress, to give you a set of rules. If you don’t play by these rules, you will be punished. But to those who have a living, loving relationship with Jesus and His Word, the Bible, God and Jesus are a fence around a playground, and inside is where the joy abounds. Prison wall or playground fence—it all depends on which side of the fence you stand.

God paid a price so you could enter the playground: the death, burial and resurrection of His only Son. If you have not done so, would you make a choice to start following Him today? “The city streets will be filled with boys and girls playing there” (Zech. 8:5).

Rite of passage: Love Potion No. 9