REVIEW: ‘I Still Believe’ is a powerful romantic film every teen should see 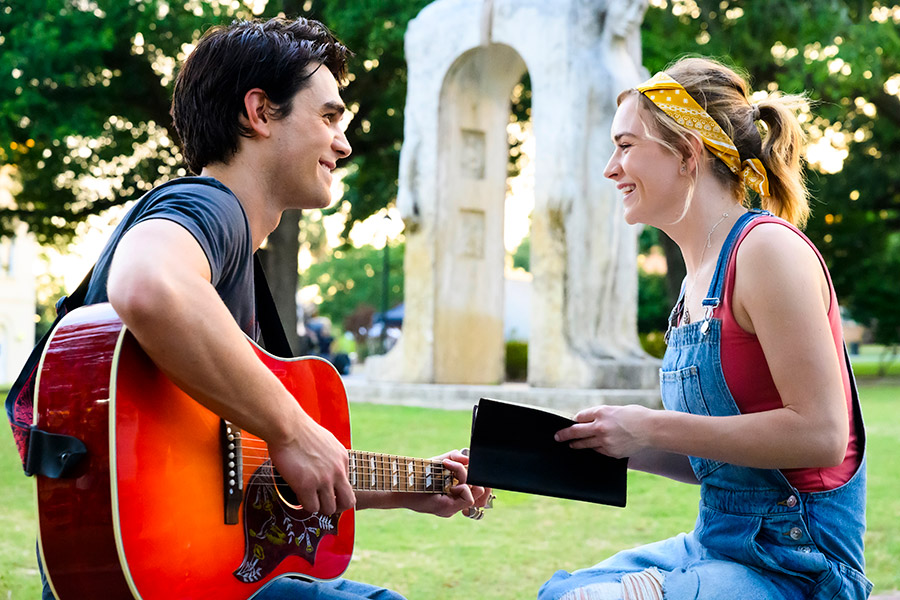 The faith-based film “I Still Believe” releases in theaters this weekend, telling the true story of Christian singer Jeremy Camp’s marriage to his first wife, Melissa, who was diagnosed with cancer.

Melissa is a cheerful, optimistic college student who promised her sister she wouldn’t get distracted by romance this semester.

But then a new student named Jeremy entered her life.

He’s outgoing. And funny. And, like her, a Christian. He’s also a great singer—a quality she seems to enjoy.

She reluctantly agrees to date him and soon realizes he may be the one.

Yet before Jeremy can propose, she is diagnosed with ovarian cancer and given a grim prognosis that seemingly derails their budding romance.

Jeremy and his friends pray for a miracle. Will one come?

The new faith-based film I Still Believe (PG) releases in theaters this weekend, telling the true story of Christian singer Jeremy Camp’s marriage to his first wife, Melissa Henning. After her death, Camp wrote the popular Christian song that has the same title as the film.

It was co-directed by Christian filmmakers Jon and Andrew Erwin, who also made I Can Only Imagine, Woodlawn, Mom’s Night Out and October Baby.

I Still Believe may be their best movie yet. It features first-rate acting, but doesn’t compromise the Gospel message. It provides romance and love, yet in an innocent, culture-challenging way. It offers plenty of surprises, even though you know how the story ends.

“If one person’s life is changed by what I go through, it will all be worth it,” Melissa says.

Apa and Robertson carry the film with their excellent on-screen chemistry, although the Gospel—and it’s self-sacrificing message about love—is at the heart of the story.

I Still Believe is the romantic film every teenager and young adult needs to see. It’s also a movie churches can get behind and support.

Minimal. Death is discussed, and we see a main character pass away, but nothing is graphic.

The film subtly promotes chastity. We never see Jeremy and Melissa alone in either of their dorm rooms. She also doesn’t kiss him on the first date.

The movie also integrates the wonders of the universe into the plot, as the couple visits a planetarium and discusses God’s love for humanity.

“God is so infinitely vast. And this is His painting,” Melissa says. “We paint with brushes. He paints with a billion stars and a trillion galaxies. And He knows my name.”

Love is sacrificial: The love displayed in I Still Believe is selfless. It’s sacrificial. It’s a dramatic contrast to our me-centric culture’s definition of love.

There is hope in the midst of tragedy: Melissa believed there was a reason for her suffering. “What if I’m not supposed to be healed?” she asks. She grew in her faith to the very end.

God’s plan is perfect: Jeremy didn’t understand why God allowed Melissa to die, but in hindsight, we can see how God worked through that tragedy for good (Rom. 8:28). The film wonderfully delivers this message.

Miracles don’t always come: The film doesn’t have the typical fairy tale ending to its love story, even if the film’s final scenes are inspiring and filled with hope.

Our society’s view of love is reflected in its movie titles (Sex and the City), its sordid book plots (Fifty Shades of Grey) and its divorce rates. It’s a self-pleasing, self-serving view of love that puts sex, pleasure and materialism at the center—and then sends sacrifice, selflessness and resolve to the back of the line.

In other words, it’s the opposite of Christ’s view of love.

That’s one reason I Still Believe stands out from other films. It promotes ideals our society has forgotten—ideals the Apostle Paul championed in 1 Corinthians 13: patience, kindness and selflessness. It’s the love that does not envy, does not boast and is not proud. It doesn’t keep records of wrongs. It always protects and always perseveres.

Jeremy Camp could have walked away from Melissa, but he didn’t. He pursued her and never left her side. That’s a picture of love our world needs to see.

I Still Believe is one of the best films I’ve seen.