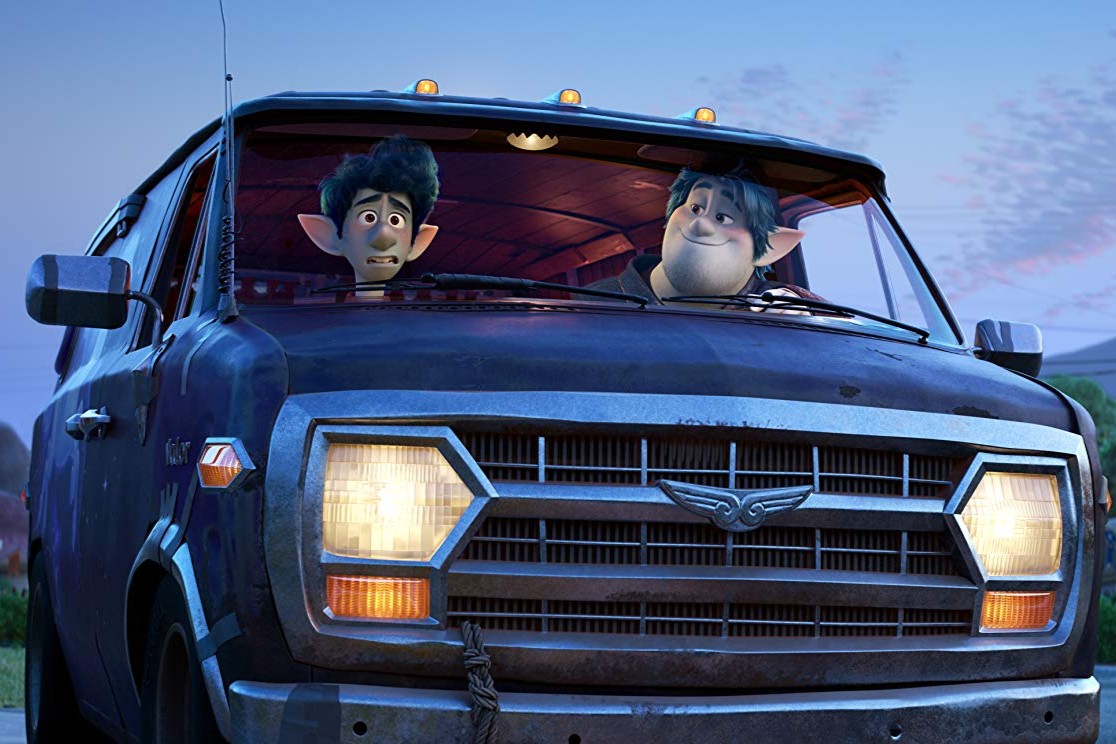 Ian and Barley Lightfoot are two elf brothers who seemingly are polar opposites.

They have little in common on the surface, but if you dig a little deeper you’ll discover they share a common bond: They miss their late father.

Barley has a few memories of his dad. Ian has none.

Ian wears his father’s old sweatshirt. He listens to his dad’s voice on cassette tapes. He talks to his dad’s friends, asking them what they remember about him.

And then one day, mom gives the boys a treasured gift their father left for them: a magical staff, accompanied with a spell that could bring him back to life for 24 hours.

But the boys quickly learn that magic isn’t as easy as it seems: The spell only brings back half of their dad—specifically, his legs. And to cast another spell—that is, to bring his top half into the world—they’ll need a special crystal known as a Phoenix Gem.

With the clock ticking, Ian and Barley set out on a road trip to find one.

The film is set in a fantasy world of elves, fairies and unicorns, although most residents in this world don’t practice magic, having replaced it with modern conveniences such as appliances and smartphones. (The brothers’ father, we’re told, was an accountant—not a wizard.)

Onward attracted much attention for a scene involving a secondary LGBT character—more on that below—yet its father-centric plot is the dominant theme. In fact, it’s not an exaggeration to say Onward celebrates the traditional family.

Minimal. For children, the film’s most disturbing element may involve Ian and Barley chatting with their “half dad”—even though it’s played for comedy.

The brothers escape plenty of predicaments. They enter a house that appears haunted, only to discover it’s a restaurant filled with happy customers. Later, they anger a fire-breathing Manticore (a winged lion) but easily escape. Ian casts a spell that allows him to walk on air and cross a bottomless pit. The brothers are shot at by arrows. They nearly drown, but their “half dad” goes underwater to help them escape. The film ends with a dragon-like creature (it’s made of rocks) battling the boys.

None. We see the brothers’ mom kiss her boyfriend. We also see the top of Barley’s rear end in a plumber-type gag.

Ian and Barley’s mother has heroically raised her sons as a single mom, and the film includes several touching moments of her talking to them. The movie also gives a positive nod to step-dads. (The mother is dating a centaur policeman she eventually marries.)

The magic in Onward is similar to that in Frozen. (We’re told magic is used to help those “in need.”) Ian casts several spells during the journey, including one that allows him to walk on air across a bottomless canyon.

The LGBT-identifying scene involves a female police officer who pulls over a male driver for speeding and reckless driving. Sensing he’s nervous because he is with his step-son, she says, “It’s not easy being a new parent. My girlfriend’s daughter got me pulling my hair out.” We don’t see her again, and we don’t see her girlfriend, either.

Siblings are a blessing: Too often, rivalries develop between brothers and sisters. In Onward, the brothers become best friends.

Fathers are essential: The mom in Onward is a hero, but Ian still misses the father he never knew. Eventually, he welcomes another father figure into his life (his step-dad).

It’s ironic that a film championed by the mainstream media for its (very brief) LGBT inclusion actually champions the traditional family instead. In other words, a film with a lesbian character in reality teaches us about the necessity of fathers (and mothers, too). It’s a lesson straight from the book of Genesis.

This doesn’t mean, though, that Onward is a perfect movie—and it doesn’t mean I’m recommending it. It still has a plot involving a dead father coming back to life. (The film, set in a fantasy world, glosses over the “where was he?” question.) It still has Frozen-like magic that repels many moviegoers. And it still has an LGBT-inclusive scene that may go over the heads of many children—although some kids may leave the theater asking tough questions.

Still, it’s nice to see God’s design for the family dominate the plot—and firmly in the spotlight.

Rated PG for action/peril and some mild thematic elements.