SHAWNEE—Life can be about relationships. The common phrase “it’s all about who you know” does not have to mean getting breaks in life because of connections with certain people. It could mean who you know defines who you are. 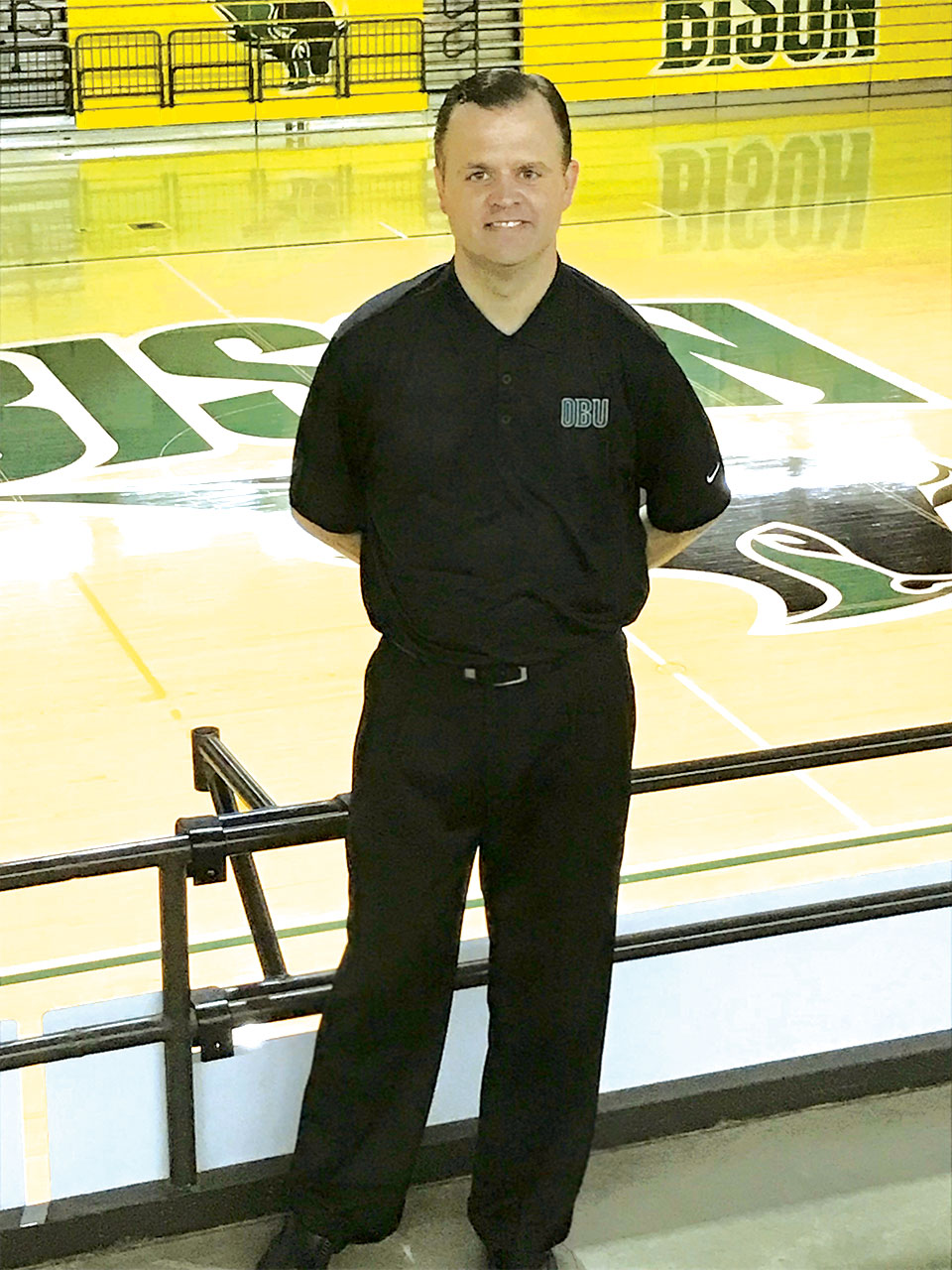 “Our relationship with Christ is not predicated on what we do, but, rather, it is predicated on His grace, mercy and love for us as His children,” said Eaker, who is beginning his first head coaching role at Oklahoma Baptist University (OBU).

This new job for Eaker is a thrill for his parents. Allen, his father, was a member of the OBU basketball team that won the 1966 NAIA National Championship and was the national runner-up in 1965 and 1967.

When Eaker called his father in April to tell him he got the job at OBU, his father was speechless.

“He broke down and started crying,” Eaker said. “He gave the phone to my mom. I wasn’t expecting that.”

For the past five years, Eaker served as an assistant coach at Mercer University in Macon, Ga., under former OBU coach Bob Hoffman, whose relationship with Eaker goes back to Eaker’s high school years. Hoffman recruited Eaker out of Altus High School to play at OBU. But after Eaker’s freshman year at OBU, Hoffman took another coaching job. Eaker said he “wasn’t in the new coach’s plans,” so he transferred.

Eventually, Eaker and Hoffman reunited at the University of Texas-Pan American, where Eaker was Hoffman’s video coordinator and began his basketball staff career. Other stops along Eaker’s coaching career include the University of Oklahoma for a year as a graduate assistant and then a lengthy stint at Liberty University, in Lynchburg, Va., for approximately eight years.

While coaching at Liberty, Eaker learned how important relationships are during a difficult period of his life.

“I got addicted to not only my occupation and my career rise in my early 30s, but I got addicted to a medication called Adderall that I (was taking) for more than a decade for ADHD,” Eaker said.

“Then I ended up making a poor decision in photocopying a prescription of that medication, not knowing the consequences of what I was doing, as I turned that in to a pharmacy.

“I got arrested, ended up in drug rehab and put on administrative leave, and ultimately losing my job. Thankfully, I didn’t lose my marriage and didn’t lose my relationship with Christ.”

His wife Meredith supported him during these dark days. Looking back, he also reflects how important his Lord and Savior Jesus Christ is, as he was recovering.

“(Jesus) was with me, even though I didn’t view it that way at the time,” Eaker said. “My wife definitely could have left me during that time.”

Eaker experienced restoration and reconciliation. His relationships with people at Liberty University have been renewed. Jason and Meredith have celebrated nine years of marriage and have a son, Isaac Arrow, who recently turned one.

And who was there to help Eaker get back on his feet in coaching? Coach Hoffman gave him a job on his staff at Mercer, and Eaker was there when the Bears upset Duke University in the 2014 NCAA Basketball Tournament. Mercer compiled a record of 99-72, during the five years Eaker was on Hoffman’s staff.

“Adversity and failure in life introduce us to who our real friends are,” Eaker said. “They also illuminate how special it is to have a relationship with Christ because He doesn’t leave or forsake us even when we do that to ourselves. I truly see God’s grace and mercy and love in carrying me through that and still providing hope.”

Eaker has been able to share his story while coaching with Athletes In Action. He believes God has prepared him to encourage others who need to hear his story of hope.

Now, Eaker is bringing hope to Bison Basketball as OBU has fully made the transition to compete at the NCAA Division II level.

“We have a ton of work to do, but we’re excited about it,” Eaker said. He appreciates the support he has received from many OBU alumni and fans.”

“There is a huge support network that is rooting for us,” he said, “and I felt that the last three months, whether that is emails or stopping by or notes that have been written. There are so many people who want to see us do well.”

If life is about relationships, then Eaker’s is very full.