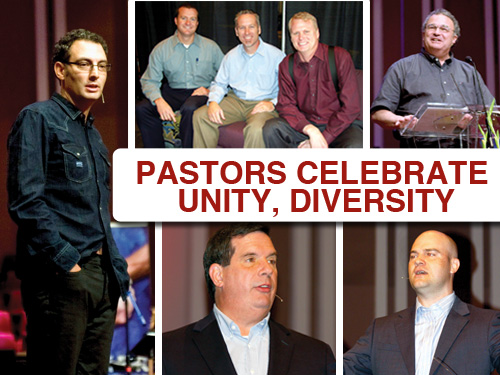 MOORE—The president of LifeWay Christian resources and three Oklahoma pastors shared insights on how Oklahoma Baptists can celebrate the unity and the diversity they enjoy at the annual Pastors’ Conference Nov. 14 at Moore, First.

Citing statistics gleaned while gathering information in preparation for co-authoring the book, Transformational Church, (with Ed Stetzer)  Rainer said, “We serve a God of all possibilities; we serve a God of hope,” as he reminded those present, “God is not done with our ministries, yet.

But, Rainer cautioned that transformation comes by the Holy Spirit, not by human strength or might, as is pointed out in the fourth chapter of Zechariah.

In their book, Rainer and Stetzer address how a body of believers does its part to be in the “sweet spot” where true spiritual transformation occurs. By surveying 50,000 churches, and then narrowing the scope down to 500 congregations—they share with readers the qualitative answer. Transformational Church, the most comprehensive study of the modern American church to date, contains a wealth of indispensable new data, nuanced insights and how-to guidance, all centered on this key finding:

“Transformational churches make disciples whose lives are being transformed by the Gospel, so that people engage the culture around them for its ultimate transformation. Deeply committed to the essential foundations of discipleship (worship, community and mission), transformational churches practice their faith and make disciples through vibrant leadership, prayerful dependence upon God and relational intentionality. And they do so paying mind to their unique context and with a missionary mindset.”

“God can still penetrate the hardest hearts . . . there is no obstacle too big for God,” Rainer stressed, reminding the pastors that the presence of God is always with them, the power of God is with them and the possibilities of God are with them as well.

Moving to I Peter, Rainer reminded the pastors that God said to “be holy, because I am holy.”

Not only was there hope spelled out by Peter, but there also were one or two people used as an instrument of transformation, Rainer pointed out.

As it says in verses 13-16, Peter called for the temporary residents of the dispersion to “get your minds ready for action, being self-disciplined, and set your hope completely on the grace to be brought to you at the revelation of Jesus Christ.”

He also called on them to be obedient children and not conformed to their former ignorance.

“All of this applies to us in the 21st Century as well,” Rainer said, reminding those present that it takes only one divine moment for a revival to break out, such as happened at Asbury College in 1970, when it was estimated that more than 1 million people were saved.

Garland, who recently celebrated his 25th anniversary at his church, spoke on Unity through Diversity. He focused on Matthew, chapter 16, when Jesus and his disciples came to the region of Caesarea Philippi and He asked them, “Who do people say that the Son of Man is?” Peter got it right when he proclaimed that Jesus was “the Messiah, the Son of the living God!”

Garland said, “I don’t have a reason to get up on Sunday morning if it’s not Jesus.”

Himaya began speaking about when the disciple, John, told Jesus in Mark 9:38 that he and  some of the others had commanded another person who was driving out demons in Jesus’ name to stop doing it because “he wasn’t following us.”

“It is the person of Jesus Christ in us that unites us,” Himaya countered. However, he admitted that, “I’m still working on love your neighbor as yourself.”

Himaya said believers can have disagreements, but we must build bridges over them.

“Our common bond is the person of Jesus; disunity is sin and is putting ourselves on the throne,” he said. “If we share Christ together, we share hope and we share peace. Christ brings us peace.

“The collective goal is to glorify God.”

Wiginton said, “The only prayer that Jesus prayed that was never answered was that you and I were one. We may not be now, but it will happen.”

But he urged pastors not to bail out on their ministries if they were facing hardships or are weary.

“We speak to people who have no hope and those who have false hope,” he reminded those present. “Pastor, don’t abandon the flock!”

Wiginton said the number one problem in the church today is selfishness.

“We could fix our church in five minutes if we took selfishness out of it,” he proclaimed to all listening. “There is no such thing as tenure in your church. You are not allowed to have your prejudice . . . this is not our church, it is His!”

Wiginton said church leaders have for too long “taught goodness instead of godliness. But, God has a plan to set it right, as he said in Ezekiel 36:23, ‘I will sanctify My name.’”