PANAMA CITY, Fla.—It took pastor Tim Dowdy more than a year of training before he looked out over the Gulf of Mexico ready to swim it.

Members of his church, Eagle’s Landing, First in McDonough, Ga., had joined him on the beach to cheer him on.

The waves were choppier and the water colder than he’d expected, and he was about to swim farther than he ever had.

It would be a meaningful feat, no matter his reason for doing it.

But Dowdy wasn’t staring at the expanse of water just to prove he could finish the 140-mile Ironman Florida triathlon. The 51-year-old pastor and his 25-year-old son, Micah, were in Panama City sending a message to Southern Baptist bivocational pastors.

“The water’s a little chilly today, but it’s warm outside, so hopefully they’ll balance each other out,” said Dowdy, as the crowd of competitors gathered at the start gate. “Bivocational pastors, this is for you. I hope you’re praying for me. I’m going to float on the prayers of people today. Thanks for all that you’re doing.”

Early last year, as, then chairman of the North American Mission Board’s  (NAMB) trustees, Dowdy was inspired by the entity’s goal to see a net-gain of 5,000 congregations by 2022.

He was also struck by the reality that this would require many more pastors, and many would need to balance their ministry with a money-making career and a family in order to start churches in areas where expenses are high and congregations would probably be small.

“I had done a couple of races and a short triathlon and at the same time I was meeting all these bivocational pastors,” said Dowdy. “I saw the correlation. I got to hear some of their stories and thought, ‘These guys are the real Iron Men.’”

During the 2012 SBC Annual Meeting in New Orleans, NAMB president Kevin Ezell stressed the need for bivocational pastors in penetrating lostness in North America with the Gospel.

“If we’re really going to penetrate the lostness of North America, it’s going to have to be with the help of bivocational pastors, because there’s no way possible to completely fund missions work full time without your impact,” Ezell said at a luncheon organized to honor bivocational pastors.

On average, the SBC loses more than 900 congregations every year. To counter this trend and achieve a 3 percent increase in the SBC church-to-population ratio will require  bivocational pastors to plant churches.

As part of its long-term emphasis on bivocational pastors, NAMB’s Send North America strategy includes a support network, resources and educational opportunities for these “Iron Men” of the SBC.

A few hundred yards into the Gulf, Dowdy experienced what everybody had warned about the reality of competing with 3,000 other swimmers in the water. He’d never raced with that many people.

“I was kicked in the teeth and elbowed and people were getting sick in the water,” he said. “’Wow,’ I remember thinking. ‘This could be over sooner than I thought.’”

A year of 5 a.m. pool swims hadn’t fully prepared him for the challenges the crowd would present. Then he focused, one freestyle stroke after another, a kick in the head and goggles, an elbow to the face, and after almost two hours of swimming, he was on the beach racing toward his bike and dry clothes.

He wiped the sand from his feet, changed, clipped into his pedals and was off into the rising temperatures for 112 miles of flat city streets.

“You never get to stop pedaling,” Dowdy said. 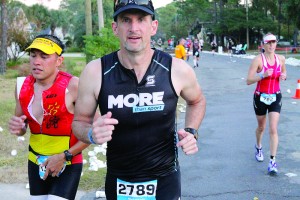 Tim Dowdy, pastor of Eagle’s Landing, First, McDonough, Ga., committed to and ran a 140-mile Ironman triathlon in honor of Southern Baptist bivocational pastors. Here he is at mile 11 of the marathon, the final leg of the race. (Photo: NAMB, Adam Miller)

Though he’d trained extensively, Dowdy had never actually covered the full mileage required of an Ironman triathlete. The distances of each event by themselves require absolute determination to complete. When grouped together in one day, they require the discipline of proper pacing and an iron will. And Dowdy said there was a third element that helped see him through that day.

“I realized you need encouragement from other people,” he said. “You could probably do it by yourself, and I’m sure there were guys out there who drove down by themselves, raced by themselves and drove themselves home.

“But it makes a huge difference to have people encourage you—both people who are running it with you and people cheering from the sidelines.”

Dowdy says the body can just lock up and say “No more.” In fact, his son, Micah, who completed an Ironman distance race in North Carolina last year, was absolutely unable to finish this year because of a bacterial infection that cropped up and took him out of the competition after mile 19 of the marathon.

Still, Dowdy says completing an Ironman is so much easier than living as a bivocational pastor.

“It was hard and there were a lot of early mornings and late nights of training,” he said. “But when I think of the perpetual balancing act bivocational pastors endure, I remember that a triathlon only hints at what these guys experience in their ministries.”

After 140 miles, 14 hours and 47 minutes, of swimming, biking and running, Dowdy crossed the finish line of Ironman Florida.