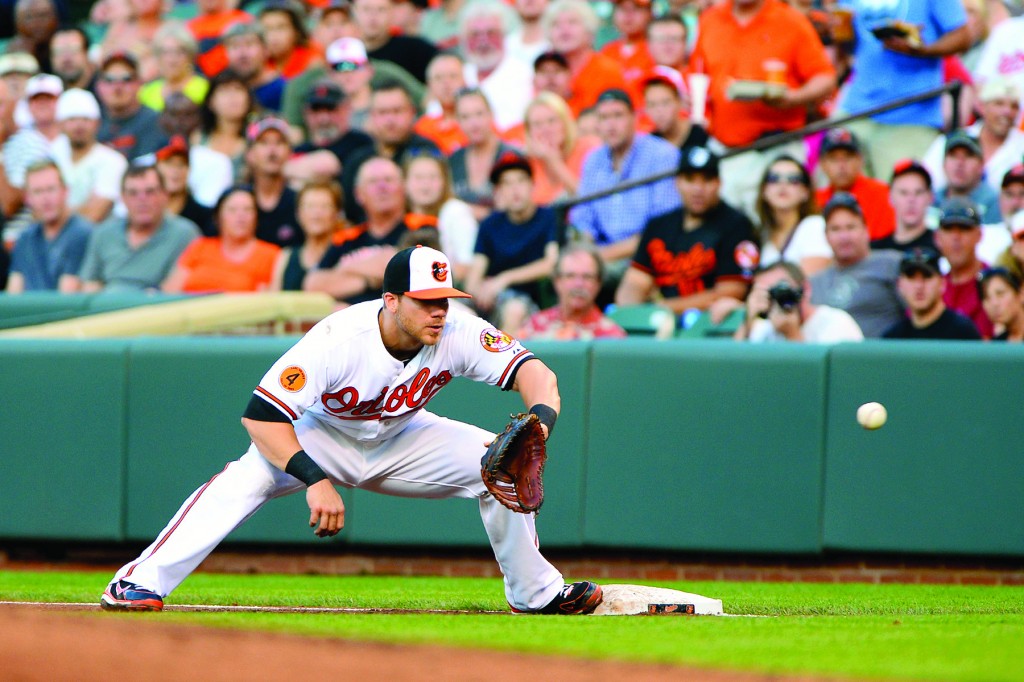 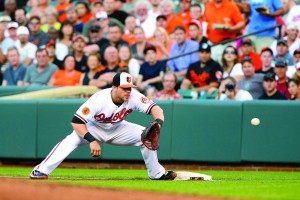 Chris Davis has established himself as one of baseball’s best first basemen.

BALTIMORE (BP)—Three years ago, life was so different for Chris Davis.

The Baltimore Orioles’ slugger was adrift on a sea of uncertainty, searching for answers as swells of career failure buffeted him. Yes, baseball is just a game, but it also was Davis’ livelihood, and his ship was taking on water fast. Retirement by age 25 was a painfully realistic option.

Called up on Sept. 11, 2010, by the Texas Rangers for his third major league stint that season, Davis was struggling. His greatest asset—his power—was virtually nonexistent. In 14 games to finish the season, he totaled one home run, one RBI and hit .211, which actually raised his season batting average to .192.

The Rangers, en route to the first of two-straight World Series appearances, left him off their postseason roster. Ten months later, after another round of unmet expectations, Davis was traded to the Orioles, carrying with him the dreaded “4A player” label—a prospect who dominates Triple-A, but can’t solve the big leagues.

What a difference a few years can make. In a shocking transformation over the last two seasons, Davis, 27, suddenly has become one of the major league’s premier sluggers. The left-handed first baseman aptly nicknamed “Crush” Davis led the American League this season in home runs (53) and RBI (138) and finished second behind Detroit’s Miguel Cabrera in slugging percentage (.634) and on-base-plus-slugging percentage (1.004).

Last year, he led the Orioles to their first playoff berth since 1997 with what was then career highs in home runs (33) and RBI (85). He earned American League player of the month honors in April, became a first-time All-Star in July and graced the cover of Sports Illustrated in August. This all raises the question: What happened?

“Just consistency,” he said. “Being in the lineup every day and knowing where I’m going to hit in the lineup, being at first base.”

Could it be that simple? Can the transformation from unwanted aging prospect to bona fide superstar really boil down to a couple hundred more at-bats a year? It seems so, considering Davis’ natural abilities that just needed to be unlocked.

But for a Christian like Davis, his remarkable career path also speaks to a sovereign God Who has outlined a unique course for him, filled with tough, life-shaping lessons.

“Looking back, I’ve grown so much not only as a man, but also as a Christian, knowing that there are times when it looks like there’s no end in sight, no light at the end of the tunnel, but if you continue to put your faith in God, He’ll never steer you wrong,” he said.

After being drafted by the Rangers in the fifth round in 2006, Davis immediately began bullying minor league pitching, hitting .302 with 74 home runs and 233 RBI in 275 minor league games over his first three professional seasons. He debuted for Texas in June 2008 at age 22 and clubbed 17 home runs with 55 RBI and a .285 batting average over the next 80 games. The future looked bright.

But the 2009 season was a disaster. When he was optioned to Triple-A in early July, Davis was hitting .202 and leading the majors with 114 strikeouts in 80 games. For the next two years, he shuttled between the majors and minors at a dizzying rate.

Davis, who doesn’t think he got a chance to prove himself in Texas, only played 45 games for the Rangers in 2010 and 28 in 2011. It was a frustrating time for a young player trying to make his mark.

Spiritually, Davis was floundering. He grew up attending Longview, Texas, First, and was baptized at age 6. But for a long time, Christianity was more ritual than relationship to him. He thought it was about church attendance and managing guilt. He didn’t fully understand yet the glorious realities of the Gospel—that Jesus Christ died to free him from sin and striving.

But the Lord was mercifully working on his heart. A humbling trip to the Dominican Republic for winter ball after the 2010 season helped refocus his faith. So did getting engaged to his (future) wife Jill and the friendly counsel of former Rangers teammates David Murphy and Josh Hamilton, who encouraged him to spend time with God every day.

“It was more of a daily routine, making sure I was in the Word and praying and knowing what it meant to walk with the Lord,” Davis said. “We’d have chapel on Sundays. We’d talk about what was going on (in their lives). The fact that they were older gave me more perspective.”

When Davis hit .362 with a team-high five home runs and 18 RBI in 2011 spring training and still started the regular season in the minor leagues, he knew his time in Texas was limited. But by then, he had developed a different outlook on the fickle nature of the game. He had learned to trust God and not wring his hands over every at-bat.

“I got to the point where, when I was at the field, I was going to work hard and do everything I could to be the best player I could be, and when I went home, I was going to enjoy my time,” he said. “I was going to enjoy being around my friends, my wife, and really try not to think about what was going on in baseball. I think that was really the biggest point—knowing that it is a game.”

The trade to Baltimore gave Davis a fresh start. In his first full major league season last year, he exploded. As the Orioles made their long-awaited playoff push, Davis hit .320 with 10 home runs and 20 RBI in the final month of the regular season, including a playoff-clinching home run in a 1-0 win in Tampa Bay in the penultimate game of the regular season.

This year, he has upped his own ante. At the end of June, Davis was batting .332 with 31 home runs and 80 RBI in 81 games and appeared poised to challenge for only the second Triple Crown title since 1967 (Cabrera achieved it last year). A cold stretch in July nixed those plans (Davis is still a strikeout connoisseur), but he has produced a season for the ages.

On Sept. 13, he hit his 50th longball of the season, tying Brady Anderson’s single-season franchise mark from 1996 and joining Babe Ruth (1921) and Albert Belle (1995) as the only players in major league history with 50 home runs and 40 doubles in a season.

It’s been quite a journey for the kid from Longview. But things look awfully promising for the late bloomer. He’s still in his prime years and surrounded by plenty of other young talent in Baltimore’s revitalized dugout.

Davis has taken his sudden stardom in stride. He has loftier goals than baseball fame.

“I just want to be known as a godly man,” he said. “That’s more important than any legacy on the field or numbers you leave behind. What will they say about me as a person? That’s been important to me for a long time. It’s not about what I can gain but, how can I give God the glory and shine His light in places where it hasn’t been shined?”

View all posts by Joshua Cooley