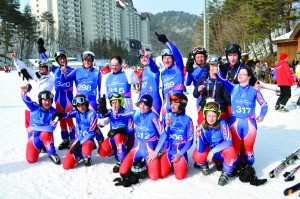 Steve Lynn is an encourager. He gives support, and he serves however he can.

He was one of approximately 200 athletes, coaches and support staff from the United States who participated in the 10th Special Olympics World Winter Games in South Korea, Jan. 29-Feb. 5.

An Alpine skier, Lynn participated in downhill, slalom and Super G, and now he proudly wears a gold medal.

“It was fun meeting different people and seeing how they do things,” Lynn, a member of Oklahoma City, Quail Springs, said about his experience in South Korea. “We found out when we got there that they speak our language. Their school was teaching them English. We didn’t know that until we got there. They gave us yellow cards to learn their language, and then we found out we didn’t have to use them.”

Now 39, Lynn was adopted a little more than a month after he was born. Not much was known about his birth, including where he was born, which apparently was not in a hospital. His birth father is unknown, and only a few details are certain about his birth mother.

Joanne, his adopted mother, also did not know at the time of Steve’s adoption that there was a problem with his brain. She said his reading skills are very limited, almost at a kindergarten or first-grade level.

However, “the logic part of his brain is not damaged in any way,” said Joanne. Steve is able to drive. He works at Target as a cart attendant, and most significantly, he competes in sports.

For more than 20 years, he has participated in basketball, softball, soccer and, his favorite, skiing. At the Winter Games, Lynn competed against 43 other Alpine skiers.

About 2,400 athletes from 110 countries came together for the Special Olympic Games in PyeongChang and Gangneung, at the same sites where the 2018 Winter Olympic Games will be held.

“He loves to compete,” said Joanne. “He takes the challenge presented by athletes from other teams and countries and works toward a performance to be his very best in the sport in which he is competing.”

Last year, Lynn was one of a dozen Special Olympians chosen to participate during the NBA All-Star Weekend. Along with his favorite player, Kevin Durant, Lynn took part in the inaugural NBA Cares Special Olympics Unity Game that featured other current NBA stars as well as NBA legends who played with the Special Olympians.

Lynn does enjoy competing, but he also enjoys supporting his fellow athletes. The athletic veteran is always there to help others who are new to competing in Special Olympics.

“Some are afraid of the coaches, so I try to encourage them,” he said. “I tell them it’s OK, and just have fun. I tell them to do their best and don’t get upset on what place you get.”

He also is very supportive of his girlfriend, Amy, who participated in the Special Olympic Winter Games as well. Joanne said Amy often gets frustrated when she is competing.

“[Amy] told him that what she loved about him was that he was able to calm her down. He has such a sweet spirit, and he understands and knows just what to say,” said Joanne.

Many sports heroes can appear to be brash and temperamental while competing, or even make scenes away from the field of competition.

Steve Lynn is a sports hero, an Olympic gold medal winner, who not only succeeds, but also is aware of opportunities to encourage others.