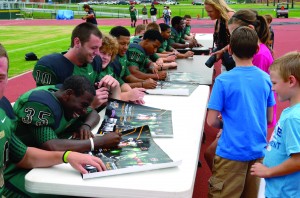 SHAWNEE—More than 100 fans and several media members attended Oklahoma Baptist University’s first football media day, Sat., Aug. 10. The favorable weather made the event ideal for those wanting to find out what the Bison squad will be like when they take the field Aug. 31 for OBU’s first home football game since 1940.

OBU Head Coach Chris Jensen met with the media and shared his excitement about his team and how he looks forward to this special season.

“God had a place for me here,” said Jensen, who was hired in January 2012, to lead the Bison. “God prepared me for this, and He is directing our steps as we go through this process. We have been here for a year and a half now. There has been a lot that had to take place to make this happen. We brought players in last year who knew they weren’t going to play a game for a year. We pushed through it and got better through the year, and I think it will pay dividends this year.”

OBU will face Southwestern College (Kan.) in its first home game. Kickoff is set for 1:30 p.m.

///Not a quarterback controversy

When asked if OBU had a controversy for who will be the Bison’s starting quarterback, Jensen said he has a different perspective.

“I wouldn’t say it’s a controversy. I’d say it’s a blessing,” he said. “We have two guys who have been on campus I feel very comfortable with. They are still battling, and we have a couple of new quarterbacks who want to be on the field.”

The two signal callers Jensen referred to are Cale Grauer, a 6-2 sophomore who transferred from Missouri Western, and Blake Woodard, a 6-2 redshirt freshman out of Newcastle High School. 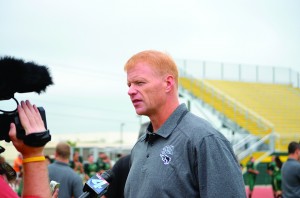 OBU head football coach Chris Jensen met with the media and shared his excitement about the upcoming season. The Bison held their first fall practice later that afternoon. (Photo: Bob Nigh)

“I couldn’t agree more with Coach Jensen,” said Woodard, who led Newcastle to the second round of state playoffs during his junior and senior years. “Cale and I are battling for the starting job right now. We also have Cooper Koons (true freshman from Tuttle) coming in. So we are just working at making each other better. At the end of the day, it will be Coach Jensen’s decision.”

Grauer led Lincoln Christian to a 2A state title his high school senior year. That season he passed for 2,702 yards and 33 touchdowns.

“Competing is what it’s all about, whether it’s against your opponents or against teammates for your spot,” said Grauer. “The best person will play, the one who will help the team the most. I will come out and compete every day. That’s what you have to do to be successful in college football.”

OBU’s offense may have strength in the running game with former Southern Methodist University tailback Darryl Fields Jr. possibly seeing action. The Madill native played under Coach June Jones at SMU and will be a sophomore this season.

Fields played in 10 games and started one at SMU. He made the Conference USA All-Freshman team as a kick returner, and returned a kickoff 92 yards against Texas Tech.

Defensive lineman Kimes Gilbert is one of the leaders on the Bison defense. Transferring from Southwestern Oklahoma State University, Gilbert was coached by Jensen at Southmoore High School. He recorded a 4.5 GPA in high school and was a powerlifting state champion.

OBU will feature a 3-4 formation on defense, which excites Gilbert. “We plan to bring a lot of blitzes and hopefully put a lot of pressure on the quarterback,” he said.

Nyko Symonds joins OBU after playing at the University of Oklahoma. The versatile athlete saw action as the Sooners’ holder for field goals and extra points, but the sophomore’s catching ability also will benefit him as a wide receiver.

“It’s obviously way different coming into a smaller school and a smaller town,” Symonds said when asked to compare playing at OU to now playing at OBU in Shawnee. “I played for Coach Jensen at Southmoore, and my expectation is just winning.  We made it all the way to the semifinals (his senior year). We were the only team from the west side of the state that made it that far that year. So, I believe in him and the coaching staff and the style of football he believes in.”

Symonds was a member of the 6A All-Star team at Southmoore. During his senior year he recorded 1,300 yards receiving and 17 receiving touchdowns.

Oklahoma Baptist legends John Parrish and Norris Russell will handle the broadcasting duties for the university’s first football season since 1940.

Parrish, who has served OBU in positions ranging from sports information director to interim president, will handle the play by play duties while Russell, the past OBU athletic director, will provide the color commentary. Both are members of the OBU Athletic Hall of Fame.

“Parrish and Russell give us a great presence in the booth,” said OBU sports information director Ray Fink. “John has researched OBU football and is the foremost authority on all Bison sports history. Russ was instrumental in bringing OBU athletics to where it is today, as well as pulling the trigger on the return of football to the campus.”

Parrish, who served as OBU’s interim president Nov. 11, 2007-Oct. 10, 2008, has worked with the university in various capacities since 1964. He also is the play-by-play voice for the Bison basketball team, serving in that role from 1973-79 and 1989-92, before resuming the post in 2001. He was OBU’s sports information director in the 1960s and 1970s and has served as an administrator for the Bison Athletic Association throughout the athletic fund raising organization’s history.

Russell was a member of the football team at Rice University, where he earned a bachelor of science degree in health/physical education and biology.

OBU has reserved the fields east of the visitor bleachers as its Tent City tailgating area for football games this fall.

The area around the football field will include inflatable games for kids and 20-square-foot lots for tailgating, designated as Tent City, since vehicles will not be permitted on the grass.

A drop-off and unloading area will be east of the Tent City area. Tents are not provided.

Tent City, as part of the OBU campus, prohibits alcoholic beverages and tobacco of any kind.

The lots are free and based on first come, first served. Groups can reserve a lot for $25 by emailing Assistant Athletic Director Jack Peavey at jack.peavey@okbu.edu.