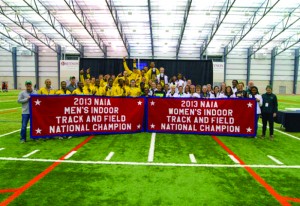 The Oklahoma Baptist University men’s and women’s track teams celebrate their national championships. It was the fifth title for the women and the first for the men. (Photo: Imagine If Photography)

Oklahoma Baptist University (OBU) will long remember March 2 as the school became the first ever to claim four NAIA titles on the same day, sweeping men’s and women’s indoor track, as well as men’s and women’s swimming and diving.

“Four championships are a tribute to the type of student-athlete we have here at OBU,” said Director of Athletics Robert Davenport. “I can’t think of an instance where a university won four national championships in one day. Congratulations to our athletes and coaches.”

For OBU, it was the fifth NAIA Indoor Track Championship for the Lady Bison and the first for the men. The men’s swim team won its second consecutive title, while the OBU women captured their first championship. The teams are coached by Sam Freas.

At the Oklahoma City Community College Aquatics Center,  the Bison men won with a final team score of 881. Condordia (Calif.) finished runner-up with a team score of 448.5, barely edging out Olivet Nazarene (Ill.), who finished with 428.5.

OBU’s Galarza of Oklahoma Baptist won the swimmer of the meet award, while fellow Lady Bison teammate MacManus was awarded the swim of the meet award for her performance in the 100-yard backstroke. OBU’s Ramirez captured both individual awards for the men, with his performance in the 100-yard backstroke winning the swim of the meet. Ian McNair of Illinois Tech won the award for men’s diver of the championships, with the women’s award going to Kristen Brimage of Oklahoma Baptist.

National event records broken by OBU swimmers during the championships:

At SPIRE Institute in Geneva, Ohio, OBU become the fifth different school to sweep the men’s and women’s team indoor track championships and first since Azusa Pacific (Calif.) in 2004. 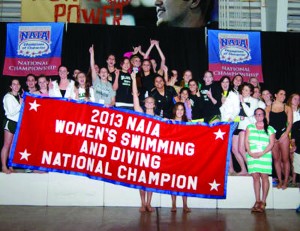 OBU head coach Ford Mastin was named the Men’s and Women’s Coach of the Year after his teams won by sizable amounts. His men tallied 86.50 points to stave off defending national champion Wayland Baptist (Texas) by 16.50 points. On the women’s side, the Bison held a 113-87 scoring advantage over second-place Indiana Tech.

OBU’s Adam Godwin and Akela Jones were named Most Valuable Performers of the meets.

“It was fantastic . . . I am a freshman, so I’m not going to lie, it was good to win it,” said Jones after being a part of the women’s title efforts.“This was the first time at indoor nationals for me and I am going to be back.”

Levy broke the NAIA national record in the 60 meter run with a time of 7.24.