“Ravens tight end Benjamin Watson is again being recognized for his work away from the football field,” is how the Baltimore Sun’s Jan. 5 article began. The Sun reported Watson, a 16-year NFL veteran, is to be the 2018 recipient of the Bart Starr Award, which “honors the NFL player who best exemplifies outstanding character and leadership in the home, on the field and in the community.”

On Jan. 4, the Ethics and Religious Liberty Commission of the Southern Baptist Conference announced Watson is to be one of the many speakers at the Evangelicals for Life Conference, Jan. 18-20 in Washington D.C. Watson is scheduled to speak Fri., Jan. 19, on “Pro-Life and Pro-Justice.” 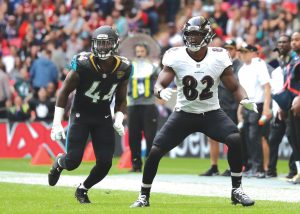 “As a man created in God’s image, my desire is to delight in the very things that my creator does,” Watson continued. “We as men must stand up for the lives of the innocent and their mothers in crisis. As important as women have been in championing this cause, we men must rise up and lead the charge. Men, we can be silent no more.

“Looking out, I see a sea of collective humanity. But looking closer, I see individuals who have their own spheres of influence. This is the power of one. It is the power of influence of people in our neighborhoods, in our churches, in our workplaces, on our teams. It is also the power to unite as we have today as one for a common cause to end the unthinkable practice of abortion in the United States of America.”

Watson has been active in community ministry throughout his NFL career, which includes playing for the New England Patriots, Cleveland Browns and New Orleans Saints. He spent three days in the offseason last year at a refugee camp in Lebanon. His One More Foundation focuses on serving people in need.

In 2015, Watson visited New Orleans Seminary while promoting his book “Under Our Skin: Getting Real about Race—and Getting Free from the Fear and Frustrations that Divide Us.” The conclusion Watson said to racial divisions is “changed hearts” in Christ.

“We live in a fallen world and we all have our specific prejudices and biases and assumptions,” Watson said. “It is through Him we get a changed heart, and through that changed heart we can love each other as He would have us to.”

New Orleans Seminary President Chuck Kelley said about Watson, “This voice and this issue need to be part of a national conversation to push us closer to becoming the country, the church of our ideals. Watson gives us a terrific model on how and why Christians must engage in all conversations about things that matter.”

Watson is willing to go against the cultural grain. He desires racial unity and racial reconciliation, but his proposed solution may not be the same one other professional athletes may offer. He also recognizes the value of the Sanctity of Human Life and will speak boldly in support.

As the Baltimore Sun stated that Watson is “again being recognized,” may God ultimately be recognized and glorified when Watson is given the chance to address important issues.