Just weeks after the recent NBA All-Star game showcased world-class basketball talent, a statewide missions event in Oklahoma showcased what God can do through all-stars of another sort: children doing missions. 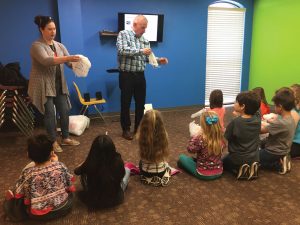 In Lawton, Mark and Leanna Hall taught about their Daughter serving in Malawi, Africa.
Photos Provided

“It was such a privilege for us to visit Mission Ignition locations in Tulsa, Lawton and OKC. I am thankful for the leadership team at each location as they led many volunteers, as they spent hours and hours preparing for children and adults to come, with more than 1,500 people attending across all three locations. The energy and enthusiasm was high,” said Charlie Gatton, Baptist General Convention of Oklahoma (BGCO) Children’s Ministry specialist.

Matthew Nichols, a first-grader from Oklahoma City, Crestview, was recognized as an All-Star Missionary Award recipient, as he has actively shared the Gospel using the Evangecube.

Sisters Emily and MacKenzie Robertson, who are sixth grade and third grade, respectively, were recognized as co-winners of the All-Star award at the Lawton Mission Ignition event.

The sisters, members of Lawton, Cameron, led the Operation Christmas Child project at their church, where they were able to pack and send 43 boxes and raise $1,025 for the missions project.

Donavon Krusinsky, a fifth-grader at Lawton, Cameron received the runner-up award, for his participation in the Rice bowls effort, which helps feed hungry children and their families around the world.

/// Around the world with the Gospel

Children could take part in Mission Ignition at one of the three locations, Lawton, First East; Oklahoma City, Southern Hills; and Tulsa, First. 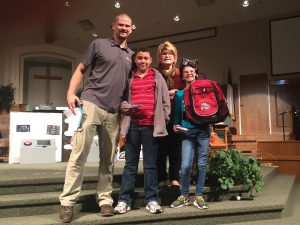 Mission Ignition, which is sponsored by the Baptist General Convention of Oklahoma, allows children to learn about different ways they can be involved in missions.

From Disaster Relief to International Missions to Hope Pregnancy Ministries, children were able to see how God’s people can be the hands and feet of Jesus to a lost and dying world.

According to Gatton, Mission Ignition helps children get excited about missions and be “challenged to do missions when they return home.”

In addition to games and activities like Gaga ball, pedal cars and inflatables, children were offered personal interaction with missionaries serving around the world today, including in Africa. Each Mission Ignition event featured a VBS style rally at the beginning of the day.

In addition, the classic pinewood derby races took place at the Oklahoma City location. The following race results were:

Gatton said, “Everyone learned how they can share the Gospel of Jesus Christ with their friends.There was something for everyone. If your church missed this event, start planning now to attend next year!”