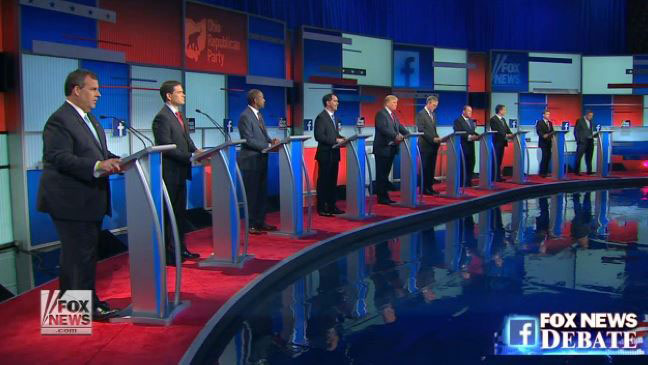 CLEVELAND (BP) — Abortion, gay marriage and God were among the topics addressed Aug. 6 at a Republican presidential debate in Cleveland involving the top 10 candidates in polls as determined by Fox News.

While no candidate expressed support for abortion rights, one — Ohio Gov. John Kasich — said the country should not divide over gay marriage. Former Arkansas Gov. Mike Huckabee criticized the Iran nuclear deal negotiated by the Obama administration last month for not securing the release of four American political prisoners including Pastor Saeed Abedini, though he did not mention Abedini by name. Neurosurgeon Ben Carson invoked the biblical concept of a tithe to illustrate a fair system of taxation.

Among the reactions of Southern Baptist commentators was approval of at least two explicit mentions of Jesus Christ as Lord and Savior, prompting Southwestern Baptist Theological Seminary President Paige Patterson to tweet, “Heard more Gospel content in Republican debate than one often hears in some churches.”

When candidates were asked whether they had received a “word from God” related to their candidacy, Texas Sen. Ted Cruz, a Southern Baptist, responded, “I am blessed to receive a word from God every day in receiving the Scriptures and reading the Scriptures.” Cruz went on to explain how his father “gave his heart to Jesus” at a Baptist church, resulting in deliverance from alcoholism and restoration of his marriage.

In response to the same question, Wisconsin Gov. Scott Walker replied, “I’m certainly an imperfect man, and it’s only by the blood of Jesus Christ that I’ve been redeemed from my sins. … God hasn’t given me a list, a Ten Commandments, if you will, of things to happen on the first day [of a presidential administration]. What God calls us to do is follow His will, and ultimately that’s what I’m going to try to do.”

Social issues were the focus of one segment of the debate, with some discussion of them at other moments too. Among the views expressed on abortion:

— Walker said he “defunded Planned Parenthood [of Wisconsin state funding] more than four years ago, long before any of these videos came out,” a reference to undercover videos released by the Center for Medical Progress showing Planned Parenthood executives discussing the sale of baby parts.

— Huckabee said the next president should “invoke the Fifth and Fourteenth Amendments to the Constitution” to protect unborn life, citing the rights to “due process and equal protection under the law.”

— Former Florida Gov. Jeb Bush said he didn’t know that a charity on whose board he served until late 2014 gave tens of millions of dollars to Planned Parenthood. Bush said he is “completely pro-life” and advocated the protection of unborn life and of people nearing the end of life.

— Florida Sen. Marco Rubio denied the assertion of moderator Megyn Kelly that he has in the past supported abortion in cases of rape and incest. “Future generations,” Rubio said, “will look back at this history of our country and call us barbarians for murdering millions of babies who we never gave … a chance to live.”

— Businessman Donald Trump said he is pro-life, having “evolved” on the issue of abortion. One factor in his becoming pro-life, he said, was witnessing the life of a child who was nearly aborted and later became “a total superstar.”

Among the views expressed on same-sex marriage:

— Kentucky Sen. Rand Paul said, “I don’t want my marriage or my guns registered in Washington. And if people have an opinion that is heartly [sic] felt, obviously they should be allowed to practice that and no government should interfere with them.”

— Kasich said he believes in traditional marriage because he is “an old-fashioned person.” He added that he accepts the Supreme Court’s legalization of same-sex marriage and told of attending a homosexual wedding. “Issues like [same-sex marriage] are planted to divide us,” Kasich said.

Among the views expressed on race relations in America:

— Carson, an African American, said, “We take every single incident between people of two races and try to make a race war out of it and drive wedges into people. And this does not need to be done.” Skin color does not make a person “who they are, and it’s time for us to look beyond that because our strength as a nation comes in our unity.”

— Walker said police targeting of blacks should be combatted through improved training of law enforcement officials and “consequences” for the “very few” law enforcement personnel who behave inappropriately.

During a discussion of support for Israel, New Jersey Gov. Chris Christie said, “I absolutely believe that Israel is a priority to be able to fund and keep them strong and safe.” Paul expressed support for Israel but said no country should receive U.S. funding if the money has to be borrowed from China.

The Associated Press declared Trump the “unquestioned star of the show,” with the New York Times calculating that Trump spoke more than two minutes longer than any other candidate. Trump refused to take a pledge not to run in the general election as an Independent or third-party candidate if he fails to win the Republican nomination. When asked about disparaging comments he has made about women, Trump said his statements often are “fun” or “kidding” and added, “I don’t frankly have time for total political correctness.”

Andrew Walker, ERLC director of policy studies, tweeted that Trump “exists to be an agent of chaos. It’s political and philosophical nihilism built on implosion.”

An earlier 90-minute debate featured the remaining seven GOP presidential candidates. Denny Burk, a Boyce College professor and cultural commentator, was among the many analysts who noted the impressive performance of former Hewlett-Packard CEO Carly Fiorina. Burk tweeted, “Even @CarlyFiorina’s post-debate was impressive. She stumped Chris Matthews” of MSNBC.