This summer, Alisa Duncan, a Baptist missionary serving in Mexico, will ride her bicycle all the way from Oklahoma City to Alberta, Canada. The forthcoming journey, which will last more than 50 days and extend more than 2,500 miles, is to raise awareness and funds for a special ministry in Mexico.

Duncan is a familiar face to many Oklahoma Baptists. She has lived and served for more than 15 years in Zihuatanejo, Mexico, as a missionary and administrator at the 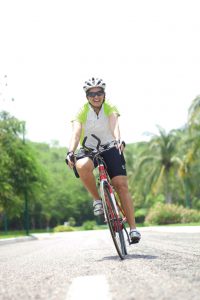 Baptist missionary Alisa Duncan will ride 2,500-plus miles this July

Baptist theological seminary. Among her many duties, Duncan has helped facilitate many Oklahoma Baptist churches who have traveled to the state of Guerrero, Mexico, as part of the Baptist General Convention of Oklahoma’s (BGCO) mission partnership there.

Duncan’s journey is scheduled to depart from the Baptist Building in Oklahoma City on July 20. This long journey, however, will not be the first of its kind for Duncan. Twice before, Duncan has ridden her bike long distances (from Zihuatenejo to Oklahoma), writing about her experiences online and raising support for various causes.

She has dubbed this current effort the “Finish Well Ride,” which will raise support for the Bet Shalom Nursing Center, a Christian ministry in Guerrero that primarily serves abandoned and at-risk senior adults.

The “Finish Well Ride” itinerary includes cities along the way ranging from Wichita to Diamondville, and Duncan must cover 60 miles per day on average to complete the trip. She has planned for days of rest along the way, including Sundays, on which she has scheduled several speaking appearances at churches along the route.

“I’ll be leaving from Oklahoma City on another bicycling adventure that, if all goes well, will end 50 days after it begins in Red Deer, Alberta, Canada,” said Duncan. “Things are coming together.”

According to BGCO Partnership Missions Strategist Mike Hand, the “Launch and Lunch” event for Duncan on July 20 at the Baptist Building will be a memorable event.

“Oklahoma Baptists can join us at the Baptist Building parking lot at 11 (a.m.), to eat, buy a T-shirt to support Alisa and pray for her as she leaves on this incredible journey,” he said.

The “Launch” event will include free hot dogs and hamburgers prepared by Oklahoma Baptist Disaster Relief, and Hand expects people from many of the churches who have 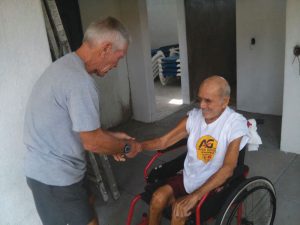 Duncan is raising support for a ministry in Mexico that serves at-risk senior adults.

been in the BGCO Partnership with Mexico to attend.

Hand, who said several BGCO officials will depart on bikes along with Duncan “for the first part of her journey,” hopes many will take part in the event and also consider becoming part of the Guerrero Partnership. According to Hand, BGCO’s partnership with Guerrero has seen a 56 percent increase in the number of churches involved in the last 14 months.

“I’m excited not only for this opportunity to highlight the cause for which Alisa is riding, but for the added exposure this gives to our BGCO partnership in Guerrero, which has been growing and producing much fruit,” he said. For information about the July 20 Launch event, contact Hand at mhand@bgco.org.

In addition to financial support, people can pray for Duncan, who says her training has become as much mental as physical. “As the day draws near, the voice in my head that says ‘You can always ride tomorrow’ is now getting overruled by the voice that says ‘You don’t have time to mess around.’ I like that voice,” she said.

When asked about the difficulty of the journey, Duncan said, “My grandfather said, ‘Easy days don’t make us better. They don’t produce endurance or character.’ So while it might seem preferable in the short term, it’ll get you nowhere in the long run, whether we’re talking about a ride to Canada or life.”

Duncan knows the journey will not be easy, but in the end, it will be worth it.