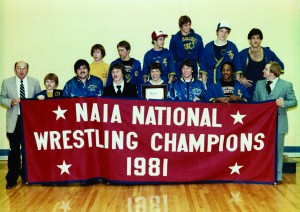 Wrestling has been around since the origins of civilization. Homer refers to wrestling in his writing of the Iliad, around 12 Century B.C.

Ancient Greece had a great emphasis on wrestling, making the competition the favored sport in the Ancient Olympic Games. Many world cultures have documentations of wrestling as part of their heritage, from China to Egypt to Bulgaria and throughout Europe.

The Bible reveals Jacob wrestling with an angel until daybreak in Gen. 32. If not for this marathon match, the name “Israel” would not exist.

Some translators have Paul stating that we “wrestle not against flesh and blood…” (Eph. 6:12). James Hastings, the Presbyterian minister, wrote commentary on this passage saying, “’Wrestling’ may be a mere friendly trial of skill, but this is not what St. Paul speaks of. He evidently refers to the gladiatorial shows, where the brutal sports were engaged in, in which the Romans so much delighted.”

Paul goes on to explain that Christians actually wrestle with spiritual forces of evil and need to prepare appropriately by putting on the full armor of God.

All of this to say, the sport of wrestling has proven itself to be not only one of great universal history but also applicable in great teachings. Yet, the International Olympic Committee wants to remove wrestling from its Games, starting in 2020.

Eddie Griffin, executive director of the Jim Thorpe Association and member at Oklahoma City, Quail Springs, had a long and successful tenure as a wrestler and a coach. When he heard the IOC executive board’s decision on Feb. 12 to drop wrestling, he was stunned.

“It caught me by surprise,” said Griffin whose 20-year coaching career started at Ardmore High School in 1972 and included stints at Del City High School, as well as the University of Central Oklahoma (UCO) and Clemson University. “Nobody had an idea that wrestling was even considered (to be dropped). It’s very disheartening and discouraging. Hopefully it’s not a final decision.”

The IOC executive board will meet in May to decide which sport or sports to propose for 2020 inclusion. The final vote will be made at the IOC session, or general assembly, in September.

Griffin said representatives from countries that have strong wrestling programs, including United States, Russia, Japan and even Iran, are planning to band together to make a presentation to the executive committee.

“When you dig a little deeper, from the calls that I’ve had and the people I have talked to, the executive committee that made this decision didn’t have representation from any ‘wrestling country,’” Griffin said. “They didn’t have any wrestling people who could speak on the sports’ behalf on that committee. I don’t know if that will be changed or not, but it seems to me that wrestling is one of the staples of the Olympic movement. It depicts all the good things about sport—hard work, character and competition.”

Griffin reflects on these good things that were instilled in him during his early wrestling years. Growing up on the southside of Oklahoma City, he recalled the leadership he received from his wrestling teams in junior high and at U.S. Grant High School.

“I am blessed that I had great coaches in junior high with Fred Holloway, and in high school with Virgil Milliron, one of the top wrestling coaches in the world, as far as I am concerned,” said Griffin.

Wrestling gave Griffin the opportunity to go to Oklahoma State University. There, he wrestled under the tutelage of Myron Roderick and was part of two national championship teams.

“I guess I use the word ‘character’ a lot for Coach Milliron and Coach Roderick,” Griffin said. “They expected you to do what you’re supposed to do when you’re supposed to do it and do it the right way. When that didn’t happen, they let you know it. They’re coaches in that regard. They weren’t afraid to keep you going in the right path.”

Just as he speaks highly of the coaches in his life, Griffin holds similar regard for those he coached.

“You feel like you had a lot of input with some of these kids, because (some of them) always come back and say you did,” he said. “I use the word ‘blessed,’ because I’ve had the opportunity to see a lot of wrestlers from the high schools I coached at and the universities, like Clemson. It’s a joy to see these guys. Most all have been successful. I think it’s because of the hard work, dedication and being a team member. These are things they have carried with them throughout their lives.”

Of the many wrestlers Griffin coached, he enjoys pointing out brothers, David and Ronnie James, because they followed paths that Griffin paved. David coaches at UCO, and Ronnie is coaching at Del City High School.

The Future of Wrestling

As to the IOC’s decision, many have expressed concerns about how it will affect wrestling. Griffin holds true to his sport and believes it will prevail.

“Wrestling is a great sport, and it’s a great sport for young men,” Griffin said. “Anybody of any size and weight has the opportunity to compete and excel in something they do on their own. A lot of what you achieve in wrestling is through setting goals and doing the work to meet those goals.”

One thing wrestling does have in its corner is history. It can be quite the challenge to eliminate a sport that has been around almost since the origin of mankind, as well as eliminate the life principles that wrestling has taught.