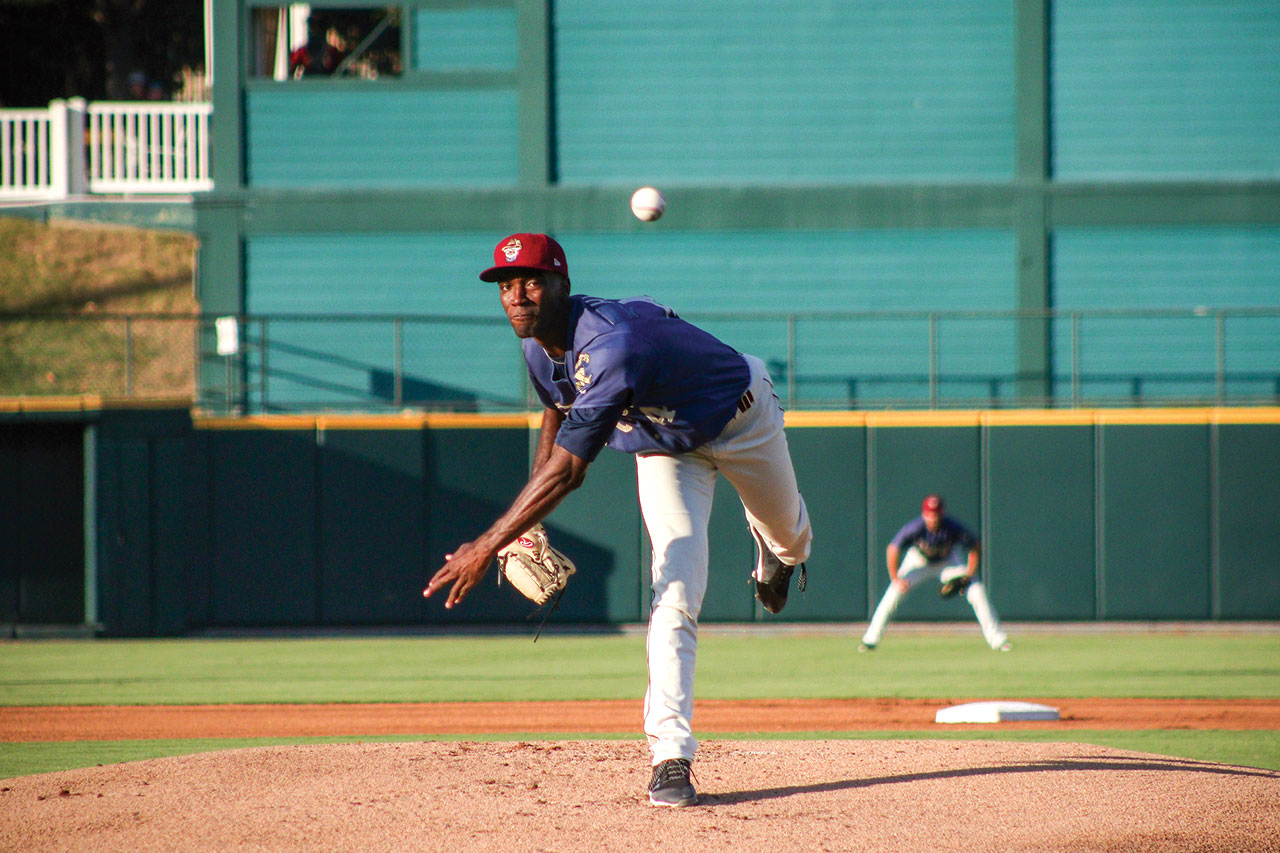 Taylor Hearn spent last season with the Texas Rangers’ Double-A team, the Frisco Roughriders. He has a chance to be the first Bison player under Coach Bobby Cox to play in the Major Leagues.
[Photo: Caitlyn Epes]

“He is a fine young man, enjoyable to be around and coach,” Cox said about Hearn who was drafted from OBU in the 2015 Major League Baseball (MLB) Draft to the Washington Nationals in the fifth round. “We saw him make huge gains confidence-wise, from the mental aspect to the physical aspect. He really blossomed.”

The 40-man roster for a Major League baseball team includes players on the active roster as well as minor league players who can be easily called up in case of need at the major league level.

Hearn was acquired by the Rangers from the Pittsburg Pirates in a trade last July. He made five starts at the Rangers’ Double A team, the Frisco Roughriders. While in Frisco, Hearn posted a 1-2 record with a 5.04 earned-run average (ERA). Through four minor league seasons between the Rangers, Pirates and Nationals organizations, Hearn has averaged 10.4 strikeouts per nine innings and a 3.48 ERA.

Major League scouts reported on Hearn that the lefthanded pitcher is “eye-turning if you see him in person… looks impossible to hit on the right day.” Hearn stands 6-5 and has clocked a 90-98 mph fastball.

Rangers General Manager Jon Daniel said about Hearn soon after the Rangers picked him up, “Arguably one of the top prospects that we’ve acquired here in the last couple of weeks. 6-foot-5, native Texan guy, left-hander, big velo(city)… Strong, real intelligent, real competitive guy. Really good fastball, obviously, but can command it at both sides of the plate. Athletic, make adjustments on the mound.”

Daniel pointed out that Hearn is a “native Texan,” as Hearn is originally from Royce City, Texas.

“He is excited,” Cox said about Hearn. “This is hometown team. It’s been a dream of his.”

When asked about Hearn’s chances to be a Major League player, Cox said, “You never know. He’s got a shot. When you look at the number of guys who try to make it to that level—and they all dream of it since they were five years old—the odds of them making it to the roster of the big leagues is pretty amazing.

“You knew the ceiling was high for him,” Cox continued. “To see him take that to professional baseball and grow, it speaks to his work ethic and determination.”

Cox said he has had many former players play at the Triple A level, but Hearn, as well as Julian Merryweather, another former OBU pitcher, are the only ones with potential to have a Major League career. Merryweather is currently in the Cleveland Indians’ minor league system.
According to Daniel, Hearn has a lot of potential to be on the mound for the Rangers next season. “I would say out of anything, (Hearn is) definitely a big-league pitcher.”

Texas Rangers media have taken notice since Hearn has returned to his home state.

“If he can develop his slider and remain healthy, he could force his way into the Rangers’ rotation sometime next season,” Kevin Sherrington of the Dallas Morning News wrote last August about Hearn.

A blogger for SBNation.com was very positive about Hearn. “This is a dude of high order, and this is a guy with the potential to be a MLB starting pitcher,” the blogger wrote.

Cox is also encouraged about Hearn’s character and reputation of being a Christian athlete. He said Hearn was invited to speak at a Fellowship of Christian Athlete’s huddle group in Sallisaw.

“He has a great family. He’s a good Christian young man,” Cox said. “With Taylor, you never had to worry about where he was or what he was doing. He has his head pointed in the right direction. We’re hoping the best for him. You want to see kids like him get to fulfill his dreams, and I think he will use his platform to share his faith.”