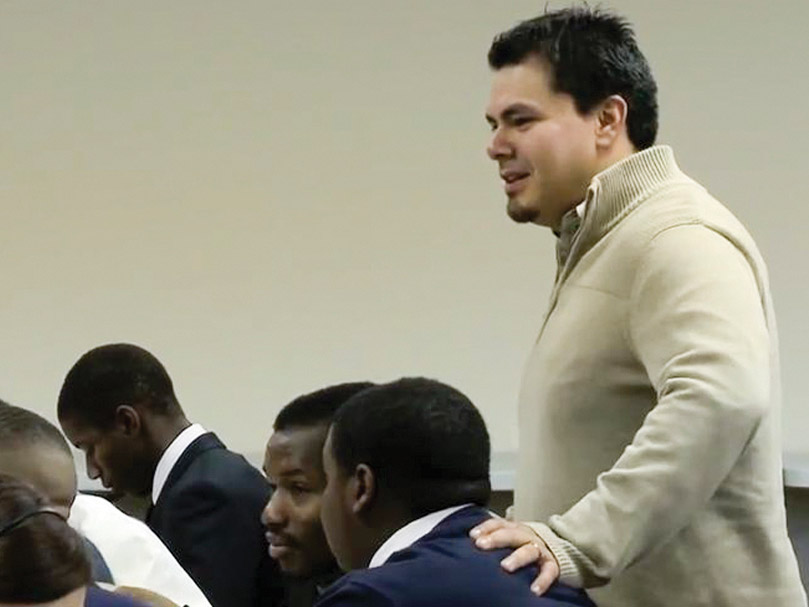 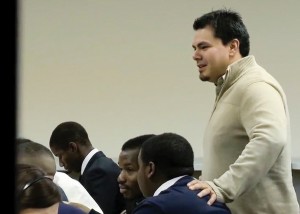 Luis Lama, an associate minister at Prestonwood Baptist Church en Español, imparts his hope to the Dallas-area Thomas Jefferson Patriots high school football team, which has won only one game in the past three years.

DALLAS (BP)—Having won only one game in three years, the

“They were captivated,” Lama said. “They were focused. At the end of the video, I got up and gave a testimony. And I prayed and gave an invitation. And I believe that was the best possible way that we could end the chapel series with these students, because 15 students (and one coach) came to Christ.”

Since that day, Lama has been discipling students with BGEA follow-up resources. Lama and Jefferson Patriot coaches participated in a community service project in December. The team attended the church service where the new believers were baptized.

Students in the Prestonwood student ministry that Lama leads have been supportive of the outreach to the football team through prayers and attending the games. “I feel that the students have had a front-row seat to the workings of the Spirit of God,” Lama said.

“It is possible to me

et new people, invest in them, share God’s message and invite them to respond.”

Born in Lima, Peru, Lama’s early life did not indicate he would have such a fruitful ministry. Until Lama was 10, his family attended Pentecostal house churches but adopted Mormonism after encountering a pair of Mormon missionaries.

“I was a faithful follower along with my family, until my senior year of high school. Being a part of religion didn’t compare to the other things the world had to offer,” Lama recounted. “The pursuit of being entertained became my quest: money, fashion, pleasure, the night life. ‘Give me fun, just don’t talk about Jesus and ruin the mood’ was the way I looked at things.”

His life of sin persisted until God intervened. At age 26, Lama had a major arrhythmia attack. The EKG registered 280 beats per minute. Unable to open his eyes, control his breathing or communicate coherently, doctors in the ER injected him with a tranquilizer. The moment they did, he flatlined, but then his heart immediately started back up at 86 beats per minute.

“Never had death become a probability until it was a reality,” Lama said. “I spent the following weeks seeking the help of cardiologists to help me with my physical heart, but also in prayer to help my spiritual heart. I started attending Prestonwood a few months later.”

This led to Lama’s salvation.

“The moment of decision came at a men’s conference,” he said. “On March 31, 2007, my knee caps were shaking as I stood up and received Christ by faith as Lord and Savior. The only thing I remember about the message was that it made me take an honest assessment of myself…. I was a sinner in need of forgiveness. The cross finally made sense to me. It was an overwhelming rush of love that covered me.”

Lama pursued God through discipleship classes, service opportunities and missions. While on a five-month stay in Argentina, Lama sensed a call to ministry and, upon returning to Texas, Prestonwood Baptist Church offered him a student ministry internship. He was admitted into Southwestern Seminary that same year, graduating with a master’s degree in missiology in December 2011.

Lama said Southwestern played a key role in preparing him for ministry.

“First, since I didn’t grow up in a Christian home, I was taught (at Southwestern) the doctrine of God,” Lama said. “I was taught the Bible” by what he described as “the best professors in the nation.”

“Second, Southwestern organized the balance of my time. The life of a pastor is not a simple one. I believe that my coursework pruned out the unnecessary of my life. Only the activities that truly matter are given attention when your time is limited.”