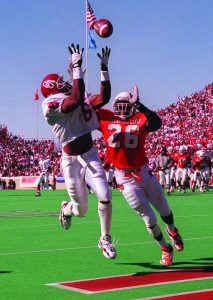 Michael McDaniel, 6, makes a touchdown reception for the Sooners during the 1996 Oklahoma-Oklahoma State game.
[Photo: The Oklahoman]

FOREST PARK—Michael McDaniel referenced a hymn titled “Hold to God’s Unchanging Hand,” when describing his time of playing football at the University of Oklahoma (OU). The first verse sings:

“Time is filled with swift transition, Naught of earth unmoved can stand, Build your hopes on things eternal, Hold to God’s unchanging hand”

Oklahoman sportswriter Jenni Carlson wrote a feature article about McDaniel in 2011. Here’s how she described him: “He led the Sooners in receptions, receiving yards and touchdown receptions as a senior in the fall of 1996. But more than anything, he was a beacon in some of the Sooners’ darkest years…”

McDaniel, though, doesn’t view his time playing at OU as down years. “I don’t like that description,” he said. “I call them transitional years. The transitions in college prepared me for transitions in life.”

He said the Bible teaches that Christians live detached lives, being not of this world, and the transitions experienced in life help teach that the Christian life is transient not permanent, as far as things of this present world.

“Time is filled with swift transitions,” McDaniel said, referencing the old hymn. “(Playing football at OU) prepared me for life, helped me to learn how to win and to lose and still see that there is value in loss. There are experiences you gain at the bottom that you won’t gain at the top.”

McDaniel recently completed his 10th year as pastor of Forest Park, Northeast Missionary, located east of I-35 in the Oklahoma City metro. He said he answered God’s call to ministry when he was a freshman at OU. Though he worked as an athletics director a few years after he graduated from college, he first became a pastor of Muskogee, First Missionary in 2002. Then he was called to Forest Park in 2008.
He believes sports helped prepare him for his current life and his time in ministry. 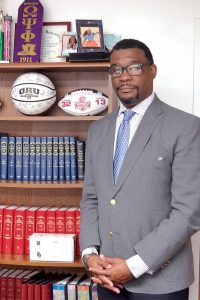 McDaniel has been pastor of Forest Park, Northeast Missionary for more than 10 years.
[Photo: Chris Doyle]

“I have a lot to thank athletics for, and especially for playing football at the University of Oklahoma,” he said. “I don’t think I would have been afforded some of the opportunities had I not been affiliated with that university, and certainly, God in His sovereignty was superseding and directing the entire time.”

He thinks highly of the many coaches he had at OU. He also appreciates the guidance of his academic advisors, including Theresa Turner, Thomas Hill and Gerald Gurney.

McDaniel also reflects fondly of the games he played. One game in particular was the 1996 Bedlam game, when OU faced Oklahoma State in Stillwater. Late in the second quarter, Eric Moore found McDaniel deep in the end zone, and the touchdown gave the Sooners a 14-7 halftime lead.

McDaniel acknowledges there is another transition happening among Southern Baptists and National Baptists. His church is dually aligned with the Baptist General Convention of Oklahoma (BGCO) and the Oklahoma Baptist State Convention (OBSC), and McDaniel credits charter members of Northeast Missionary, including Chairman of Trustees Tom Morrison, for being forward thinking and deciding to make the church dual members of both state conventions.

McDaniel appreciates the concerted effort toward racial reconciliation being made among Southern Baptists and National Baptists.

“There has to be an acknowledgement of the past,” he said. “Once we acknowledge what has happened, we do not need to linger on it, but to learn from it and move forward. I think, generally speaking, the mood of the (National Baptist Convention USA) and Southern Baptist Convention is with future thoughts of how can we paint a different picture.”

McDaniel also appreciates the work being done under the leadership of Hance Dilbeck, BGCO executive director-treasurer, and Anthony Scott, OBSC president. He believes the work done with the Langston University Baptist Collegiate Ministry, involving both conventions, is a demonstration of community.

Using the example of football, McDaniel explained how Southern Baptists and National Baptists can work together.

“When you get to the locker room, you are told that everybody is on your team. And somehow, we find a way to minimize our differences and grab hold of what’s much more significant to help us reach our goals.”

From the gridiron to the pulpit, McDaniel has made many transitions in life. He knows God is working, as Baptists and other believers are working toward racial unity.

“I think we are on our way,” he said. “We’ve got a long way to go, but we are going in the right direction.”