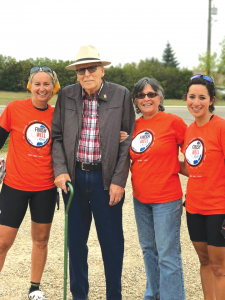 From the plains of Oklahoma to the mountains of Canada, and all 2,700 miles in between, it can most assuredly be said that Alisa Duncan finished the “Finish Well Ride” exceptionally well.

Duncan started her journey at the Baptist General Convention of Oklahoma (BGCO) on July 20 and completed her trek on Sept. 9 in Red Deer, Alberta, Canada. Previously, Duncan has ridden her bike from Guerrero, Mexico, where she lives as a missionary, to Oklahoma City.

“We just saw how God was directing us the right way, even just directing us along the path that would delight us,” said Duncan. “We were able see the total eclipse in the path of totality because of our unexpected route change, so we saw some beautiful things.” Duncan also saw the northern lights, which was a prayer request of hers to the Lord on her journey.

The Lord provided in countless other ways on the Finish Well Ride for Duncan and Cynthia Lopez, a graduate of the seminary in Guerrero, a partnership mission of the BGCO, who rode alongside Duncan for the 53-day journey.

One day, when Duncan and Lopez were going west, 30 mph winds were in the forecast, which would make for an extremely difficult ride. But they prayed for the Lord to stop the wind, “and I kid you not, five minutes down the road the wind was calm. God showed us so many things about just His interest and care for us in the little things. Since He is the one whom the winds and waves obey, why not ask Him?” Duncan said.