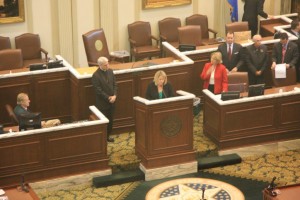 “I speak on behalf of the board of directors of the Baptist General Convention of Oklahoma— which represents more than 1,800 Baptist churches and 650,000 people throughout the state — when I say Oklahoma Baptists are as committed as ever to life and the defense of religious liberty.

I want to thank Archbishop Coakley and our Catholic friends for taking a bold stance to protect religious liberty in this debate on the Health and Human Services mandate.

In the past, Oklahoma Baptists have stood shoulder to shoulder with members of all denominations to speak out for life and religious liberty. In the days ahead, we will not leave you to fight alone. Instead, we will join you with action and prayer.”